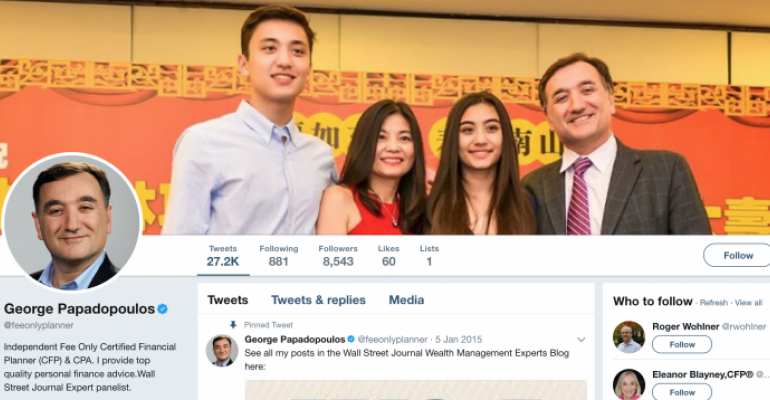 Are You That George Papadopolous?

Advisor suffers from a case of mistaken identity.

Not all George Papadopouloses are created evil.

With the recent unsealing of the first indictments filed in special investigator Robert Mueller’s probe into Russian meddling in the 2016 election, the name George Papadopoulos has become infamous overnight.

One Michigan-based financial advisor woke this morning, while on vacation visiting family in Greece, to find that his once unremarkable moniker has made him the target of vitriol from the less discerning (and bright) denizens of the internet. “I did not know about the indictments.” Papadopoulos told Wealthmanagement.com. “But I quickly learned that I was going to jail because supposedly I plead guilty. I find it amazing how some people will accuse others so quickly about something so serious without ensuring that it is the correct person.”

As the day went on, and the false accusations keep pouring in, George Papadopoulos, @feeonlyplanner on Twitter, has become more and more frustrated in his missives that this is a case of mistaken identity. To make the situation even more ridiculous, he’s currently staying in the “George Papadopoulos” capital of the world, surrounded by people with the same name who are completely nonplussed by these events Since this is Twitter, the peanut gallery has decided to weigh in, some to simply commiserate: Others have donned their tinfoil hats (with tongue in cheek): And still others offer some valuable career advice: Ultimately, Papadopoulos is trying to keep a good attitude about the whole thing and wants to enjoy the ride as much as he can.

“I am trying to make the best of it and have some fun along the way. I have gained more than 2,000 followers on Twitter, which I hope they stick around after this goes away from the front page news. And I hope it does, the sooner the better!”

For the nth time, I am NOT Trump's foreign policy adviser! I have NO association with the Trump camp! NONE!