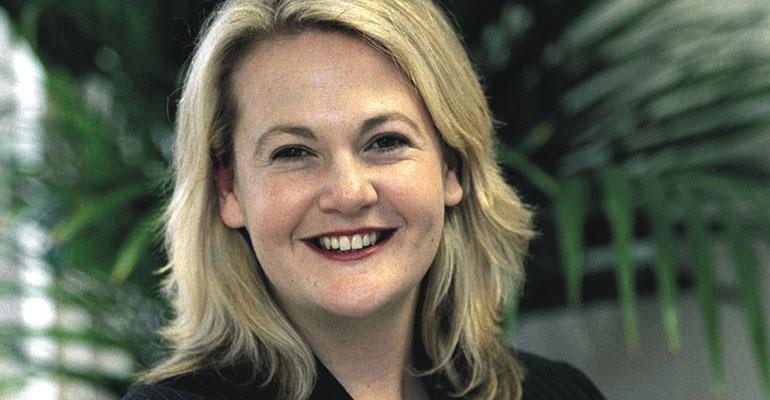 Allianz’s $2 Trillion Job: Meet the Woman in Charge of Pimco

Jackie Hunt has led Pimco to its first net inflows since 2013, but she's not taking any of the credit.

by Oliver Suess and Sarah Jones
(Bloomberg Markets) --Walk down a side alley in Munich, beneath apartments with net curtains in the windows, past figures of female superheroes on a cafe storefront, and you come to the unprepossessing headquarters of a $2 trillion asset manager. On the fifth floor, an elegantly dressed woman leans forward to field questions. She’s focused. In her hands is a coffee mug emblazoned with the word “integrity” in six languages.

Meet Jackie Hunt, one of the most important women in global finance. The 48-year-old South African runs Allianz’s asset management and U.S. life insurance divisions. In July, Hunt took over responsibility for Pacific Investment Management Co., home of what was once the world’s largest bond fund, and Allianz Global Investors. On her watch, Pimco reported its first net inflows since 2013, ending a painful period that culminated in the departure of star co-founder Bill Gross. Hunt doesn’t take credit for Pimco’s revival, though. “It’s great to come in at a point in time that’s an inflection point,” she says in an hourlong interview. “But this is a result of a lot of effort by a lot of people before I arrived.”

A trained accountant with little background in money management, she’s taken on a formidable challenge. The industry is under pressure to consolidate as fees decline, ultralow interest rates erode returns, and investors abandon active managers for low-cost passive strategies. Pimco, the firm based in Newport Beach, Calif., that Allianz bought in 2000, could hardly loom larger on her agenda. Three years of bleeding have cut Pimco’s assets by about a quarter, to $1.47 trillion. Gross’s acrimonious exit in 2014 damaged the brand and fueled criticism of Allianz, which traditionally pursued a hands-off approach to avoid antagonizing its highflying fund managers.

So what in the world attracted Hunt to the job? “Going into an organization that didn’t have a challenge wouldn’t be interesting for me,” she says. “At Allianz, I felt I could contribute.” In her new role, Hunt is expected to be more hands-on, overseeing the strategic direction of asset managers to make sure they’re aligned with the group.

Her route there was full of twists and turns. Starting out as an audit manager at Deloitte & Touche in Johannesburg, she began a career that took her to four continents and eventually landed her in the insurance industry in the U.K. At Standard Life, the Edinburgh-based insurer where she was chief financial officer from 2010 until 2013, she and Chief Executive Officer David Nish revamped the business model. They shifted away from capital-heavy life insurance to fee-generating asset management, a transformation that other insurers have since followed. According to Hunt, the line between asset management and insurance has blurred. Clients ultimately want the same thing: returns. “Customers don’t care about the product; they care about the outcome,” she says. “Allianz, with a world-class life insurer and two world-class asset managers, can provide both the protection and the investment expertise.”

People who’ve worked with Hunt describe her as smart, respected, direct, not big on small talk—and not lacking in ambition. In 2013 she finally got the chance to run a business: At the British multinational Prudential, she looked after the insurer’s operations in the U.K. and continental Europe. That put her back in the C-suite with CEO Tidjane Thiam, her former boss at Aviva, where she’d held several senior positions. She took the Prudential job hoping to expand the business. “I am a fan,” Thiam says of Hunt in a telephone interview. “It’s a combination of intellect, determination, and courage to do difficult things.” But after barely six months, Hunt’s ambitions were thwarted by the U.K.’s surprise overhaul of its pension system, a move that sent sales of annuity products plunging. Thiam left in 2015 to become CEO of Credit Suisse Group, and Prudential named Mike Wells to replace him. Hunt, who’d been seen as a potential successor, resigned shortly after when her growth strategy didn’t get enough backing, people familiar with the matter say. Prudential later announced plans to cut back its U.K. annuities business, saying the capital might be better deployed elsewhere.

Hunt had met Allianz CEO Oliver Bäte a few years earlier at an insurance industry event, but their paths hadn’t crossed much until he hired her for her current role. At Allianz she spends about two weeks a month in Munich and the rest visiting operations around the globe, including Pimco’s Newport Beach offices.

The two money managers she oversees are very different animals. For decades, Pimco was Bill Gross. He co-founded the firm in 1971 and oversaw its expansion into a $2 trillion money manager at the peak in 2013. After clashing with other executives over the firm’s moves into stocks and real estate, he left in September 2014. Bridling at media reports that portrayed him as a King Lear-like autocrat, Gross initiated an internal investigation to hunt down his naysayers. When other top investors threatened to move their money elsewhere, Pimco’s management, backed by Allianz, closed ranks against him, people familiar with the matter said at the time.

Gross’s departure accelerated a flight from the once-dominant Total Return Fund, which had started to see outflows the year before amid underperformance and a move by investors away from bonds. That left the firm without a clear direction just as the three-decade rally in bonds that had fueled its growth faded. In July, less than three weeks after she got her job, Hunt had a role in poaching hedge fund veteran Emmanuel Roman from Man Group, the world’s largest publicly traded hedge fund firm, and installing him as Pimco’s CEO. His hiring could help expand Pimco’s offering of alternative investments. Hunt says what she particularly likes about “Manny,” as he’s known, is that he brings expertise in quantitative investing, machine learning, dealmaking, and managing a complex company. For his part, according to a person familiar with his thinking, Roman is hoping Allianz will help Pimco expand in China.

Allianz’s other asset manager, Allianz Global Investors, or AGI, has done well in comparison with Pimco, logging net inflows in 14 of the past 15 quarters. Yet its cost-income ratio, a measure of profitability, was higher at the end of the third quarter—67.3 percent, vs. 57.5 percent at Pimco. That’s because, as a relatively small company, AGI has a higher share of fixed costs. Its diversified setup tends to require more spending on marketing and sales. And as at other asset managers, AGI’s fees are under pressure from the shift to passive funds, where neither AGI nor Pimco has much of a presence.

Which raises the question: Why not combine Pimco and AGI, or at least some back-office operations, instead of having the two compete for clients? Hunt rebuffs the idea, saying the firms are too different to make that work. AGI, which oversees €481 billion ($511 billion) out of Frankfurt, had been a collection of boutique managers under one roof. “Pimco is the exact opposite,” she says, adding, “we are committed to the two-pillar strategy.”

Analysts say there’s more Allianz could do to help sell the products of its money managers. “Leveraging synergies between insurance and asset management will be a key opportunity for Jackie Hunt at Allianz,” says Marc Thiele, a consultant who was formerly an insurance analyst at Mediobanca, UBS, and other firms. Hunt says Allianz and AGI are jointly exploring ways to service retail clients in places where there’s demand and where the companies don’t have a big enough presence, such as Asia.

Toward the end of the interview, Hunt talks about how being a mother of two teenagers has taught her patience. She says she likes to know what makes people tick. She’s also learned that being dogmatic creates unnecessary conflict. Only time will tell if these life skills prove useful in overseeing her new charges.