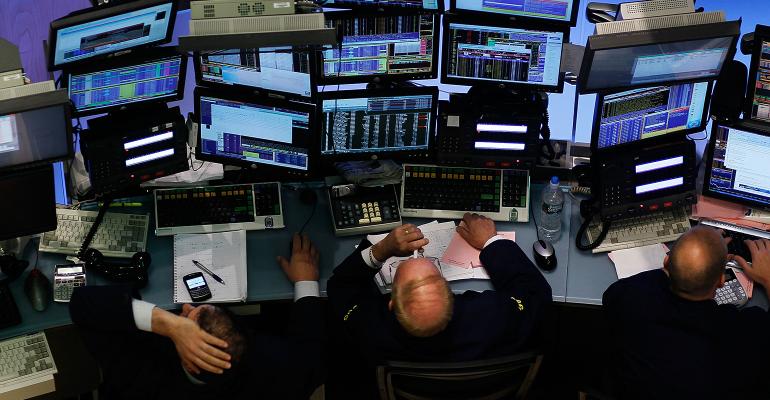 (Bloomberg) -- For its next act, the $3.5 trillion ETF industry wants to sell you the steady income of a dividend, the upside of a small cap and the good night’s sleep of a low-volatility stock. All at once.

And they really hope you buy it. Just about every big fund provider, from Goldman Sachs Group Inc. to BlackRock Inc. and Franklin Templeton Investments, is pinning the next leg of growth on the idea.

Welcome to the world of multifactor investing. It’s the vanguard of money management and a place where no answer is too outlandish to the question, “How many different investment themes can you stuff into an exchange-traded fund?” Following the success of smart beta -- those hybrid ETFs that add a robot’s idea of stock picking to passive indexes -- managers are pitching a new type of diversified portfolio effectively run by a committee of robots.

It might sound a lot like Wall Street snake oil, the mass marketing of highly complex strategies invented by professionals that stand little chance of being understood by ordinary investors. But some very serious people are convinced it’s the future of investing, a way of replicating everything a talented stock picker brings to the table except his emotions and fees.

“The industry is creating more transparent and lower-cost versions of the same quant management we’ve seen over the last couple of years,” said Lance Humphrey, executive director of global multi-assets at USAA Asset Management Co., the biggest buyer of Goldman’s U.S. multifactor fund, with 12 percent of the shares outstanding. “But there are pitfalls. It’s one of my biggest concerns.”

Multifactor is a more complicated version of something a lot of investors struggled to understand in its simpler form, factor investing, the circuitry of smart beta ETFs. Purveyors of factor funds chop up benchmark indexes and bunch companies in groups based on some trait that has beaten the market in the past: cheapness, say, or low volatility.

Decades of research suggests that tying your fortunes to those characteristics is a way to outperform. The idea caught on and today, a firm like State Street Corp. classifies $80 billion of its $2.3 trillion assets in the category.

Enter multifactor, which says if you liked dividend stocks, you’ll love them when combined with momentum, low-volatility and value shares -- or whatever else you can think up. Confusing as that might sound, the money is flowing in. Morningstar counts 299 ETFs in the category with assets of $251 billion, an 8 percent increase from the start of the year.

And a considerable swath of Wall Street believes multifactor is how money management will be dragged into the 21st century. To quant pioneers like Cliff Asness of AQR Capital Management LLC and Dimensional Fund Advisors’ David Booth, diversifying across factors has always been a governing principle of money management. The success of their firms is perhaps the strongest argument in favor of the concept’s viability.

Concern in the ETF space tends to focus on their packaging. Billed as a long-term strategy that should be held on to through up-and-down markets, some wonder how many individuals will resist the temptation to push a button on their investing app when times get tough.

“We’re not creating trading vehicles, we’re creating core exposures,” said Patrick O’Connor, head of ETFs at Franklin Templeton Investments. “It’s still relatively new. There’s definitely folks getting into it, but I think we’re all working on education, which is a good thing.”

More multifactor smart beta ETFs have been created this year than any other strategy, data compiled by Bloomberg show. Even so, no two funds harness the same mix of factors or use the same weightings.

That shows up in their returns. JPMorgan Chase & Co.’s U.S. product, which promotes itself as a value, momentum and quality fund, has returned 9.7 percent in 2016. Goldman’s U.S. multifactor posted a 4.7 percent return compared with the S&P 500’s gain of 6.3 percent.

Since most multifactor ETFs were created within the past three years, their track record is thin. Providers tout backtests, or hypothetical results based on historical data. For the one-year-old iShares Edge MSCI Multifactor U.S. ETF, BlackRock advertises a 10-year annualized return of 6.9 percent compared with 5.9 percent for the S&P 500 using historical index data.

“A lot of this is so new, but if we waited until all indexes had a live track-record of seven years, product development would stop,” said Rob Nestor, head of iShares U.S. smart beta at BlackRock. “So investors should be discerning when they’re looking at backtests and should examine closely the methodology and make sure the factors are captured and backed by empirical evidence. We welcome the examination of that.”

Not everyone is in love with those kinds of historical comparisons. A fund might use complicated parameters to make the strategy look great in the past, while replicating it in the wild is another question. Sometimes known as the “monkey portfolio” critique, skeptics suggest smart beta and multifactor are among a gallery of Wall Street gimmicks that look good until they hit the retail market. Make anything complicated enough, they say, and half the time it’ll seem to be doing something useful.

“The factors that have been proven again and again are simple,” said Felix Goltz at EDHEC Risk Institute, part of a team that published an April study countering accusations that factor investing provides a mathematical gloss to random returns. “Very often, providers come up with complex factor definitions that are original and different from the academic work, with several adjustments. You come up with a result that could be a fluke.”

None of that has discouraged Wall Street from adopting the strategy en masse. According to a January survey by Greenwich Associates, 57 percent of institutional investors use multifactor ETFs in some way while 48 percent said they planned on increasing their holdings in the near future.

The most popular funds are from Goldman Sachs Asset Management. They’re billed as “strategy driven,” combining momentum, dividend, value and quality factors and spreading them across different geographies.

More than $2.4 billion has flowed into the ActiveBeta suite, making it one of the biggest product launches in the history of the three-decade-old industry. Assets in its U.S. equity product are nearly three times the size of its closest competitor.

“We believe in this multifactor approach,” said Heather Miner, global head of strategic advisory solutions at Goldman Sachs Assets Management. “There has been a considerable investment of time and resources by the firm. What we find most often is many investors are either replacing or complementing their market-weighted ETFs with multifactor smart beta.”

For all the complexity, multifactor and smart beta ETFs have a storied academic lineage rooted in observations that the efficient market hypothesis has holes in it and that certain types of stocks do better than others over time. Capturing those anomalies is what beating the market is all about, proponents say, whether done on purpose with ETFs or sometimes unconsciously through active management.

It’s the unconscious aspect of stock picking that emboldens multifactor’s proponents. They’re convinced that when an active fund outperforms, it’s not because the manager is a genius, but rather that he got lucky by building a portfolio with investment themes that just happened to go up. By taking the human out of the equation, computers can focus on diversification while letting the factors -- which would normally explain most of the fund’s performance -- do their thing.