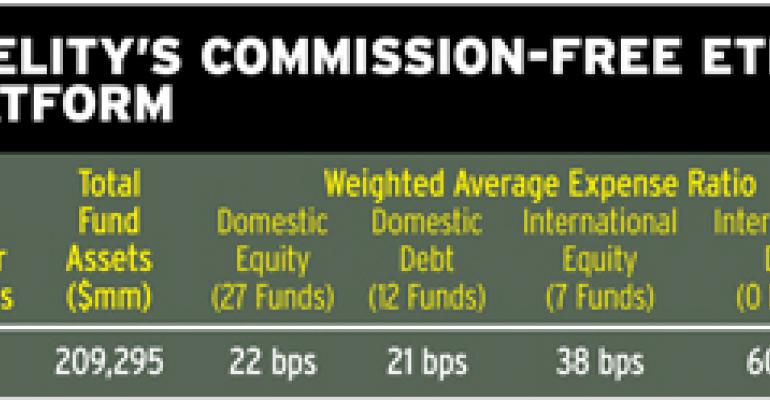 An ETF Commission War Is Brewing

There&#8217;s something afoot in the ETF space that&#8217;s going to challenge reps and advisors to create value-for-money propositions for their services. In case you haven&#8217;t noticed, suites of commission-free ETFs are now being offered by a number of brokerages.

There’s something afoot in the ETF space that’s going to challenge reps and advisors to create value-for-money propositions for their services. In case you haven’t noticed, suites of commission-free ETFs are now being offered by a number of brokerages.

Charles Schwab & Co. kicked things off last November as a means to build assets in its recently launched family of exchange-traded funds. A few months later, Fidelity Brokerage Services rolled out a more expansive plan offering free trading of 25 iShares portfolios and its own ETF tracking the Nasdaq Composite Index. Both brokerages were later upstaged by Vanguard Brokerage Services’ offer of commission-free trading in all 46 extant Vanguard ETFs and in an upcoming floatation of 16 additional portfolios.

Wirehouse reps and financial advisors have to wonder if the ETF deals are paying off for their sponsors and, more importantly, if they represent the pilot wave of a freebie tsunami to come. Let’s look at each brokerage’s offer to assess their relative strengths and weaknesses as well as the implications for investment professionals.

Schwab’s deal
Though Charles Schwab & Co. made its name as the original commission discounter, its more recent modus operandi is that of a one-stop financial services firm and custodian. As Schwab’s still very much a brick-and-mortar operation, it’s recently lost ground to internet brokerages.

Commission-free ETF trading is Schwab’s direct challenge to the cyberbrokers. Few transaction-only firms are likely to build the type of asset management infrastructure Schwab’s created just to snag assets. The San Francisco -based firm’s Schwab Investment Management subsidiary has been running money since 1989 and now has a stable of 66 mutual funds under its brand.

Schwab is also taking on established ETF sponsors by leveraging its retail brokerage platform to gather assets. The firm already brokers about a fifth of all retail ETF trades, but its debut as an exchange-traded fund issuer stakes a claim to a fast-growing segment that’s challenging mutual fund hegemony. The demand for ETFs has grown along with a cohort of aging baby boomers looking for a more “do-it-yourself” style of investing. An increasing distrust of Wall Street and high fees, along with the democratization of investment information through the Internet, has accelerated the segment’s growth.

A free trading platform also opens the door to dollar-cost averaging into ETFs -- an investment method long favored by mutual fund clients but up ‘til now made prohibitively expensive by transaction fees. The door to ETF inclusion in employer 401(k) plans has also been pushed open.

Schwab’s flotilla -- now numbering eight funds -- offers exposure to the U.S. and international equities markets only; none of the firm’s proprietary ETFs provide access to the debt market.

A further limitation of Schwab’s fund offer is their broad-based exposure. Domestic portfolios use the Dow Jones’ U.S. Broad Stock Market Index and its large-cap, large-cap growth, large-cap value and small-cap splits. International stock funds track FTSE developed market, developed market small-cap and emerging market benchmarks. You can’t get much slicing and dicing done with the Schwab line-up. Building a diversified portfolio of ETFs requires an investor to look to other providers to fill in the missing tiles for debt market exposure and/or finer slivers of the equity market.

To keep pace with increasing competition, Schwab recently cut its ETF expense ratios to some of the lowest in the industry, putting a shot across low-cost leader Vanguard’s bow. However, with Vanguard’ s ETFs holding an average $2.2 billion in assets compared to Schwab’s $152 million, the Malvern, Pa -based fund giant isn’t likely to be worried. Yet.

Summing up, the Schwab offer is limited, at least for now. Fee wise, the Schwab funds are attractive, but its customers will ultimately end up paying fees to build a complete ETF portfolio. The free deal applies only to online trades of Schwab’s funds. Commissions for online trades of non-Schwab ETFs are $8.95. Customers using the broker’s automated telephone system -- even for transactions in Schwab’s proprietary ETFs -- are nicked for a $5 service charge while broker-assisted trades cost $25.

Fidelity Joins the Fray
In February, Fidelity Brokerage Services rolled out its free ETF trading platform. Like Schwab’s program, commissions are waived only for online trades of designated ETFs. Non-program funds bought or sold on the Web are subject to Fidelity’s now-normal $7.95 fee (previous to the Schwab offer, Fidelity’s ETF commission was $17.95). Telephone transactions -- even for the 26 platform funds -- cost $12.95. Any trade facilitated by a Fidelity representative is subject to a $32.95 fee.

The Fidelity deal represents 58 percent of iShares’ total assets, including some of the largest and most liquid portfolios in the family. An immediate advantage over the Schwab offer is the ease by which a well-diversified ETF portfolio can be constructed within the Fidelity program.

If Schwab started the ball rolling, Fidelity’s deal pushed it further down the hill. Vanguard Brokerage Services is looking to crush its competition with it.

In May, Vanguard opened its entire line-up of ETFs to commission-free trading. Customers get the commission break whether they trade online or through a Vanguard rep. Along with the freebies, the firm also cut the fees for non-Vanguard ETFs and stocks to $2 or $7 for most customers. Vanguard’s recent transition to self-clearing created the economies needed to trim its transaction charges. (Fidelity and Schwab have been self-clearing for years.)

The firm’s panoply of portfolios allows investors to build the domestic side of their portfolios by sectors as well as by capitalization tiers and styles. Eleven sector portfolios, with an average expense ratio of 24 basis points, are offered. Style-based funds -- value and growth splits -- cost, on average, 14 basis points.

Vanguard’s slate of commission-free ETFs will soon expand to include another 16 domestic equity portfolios based upon better-known Standard & Poor’s and Russell benchmarks. The funds currently tracking the U.S. market are primarily based upon MSCI indexes -- the result of coming late to the ETF space and finding S&P’s and Russell’s indexes locked up by archrival iShares’ exclusive licensing deals.

Exclusivity has since melted away and Vanguard is now pouncing on the opportunity to poach in iShares’ backyard. Vanguard’s new ETFs are expected to carry expense ratios 25 percent lower than the popular iShares products.

Much ado about nothing?

At first blush, these ETF freebies seem like nothing more than loss leaders, especially for Fidelity which, with only one fund of its own, doesn’t have much of a dog in the ETF asset tussle. But Fidelity’s only reacting to what is seemingly inevitable -- reduced commissions across the board for investors. So far, other discounters such as TD Ameritrade and E*Trade Financial have remained mum about any plans to compete head-to-head on ETF prices, but that doesn’t mean the wheels haven’t started turning at their headquarters.

One thing is certain, though. These deals attract attention. And assets. If the freebies bring money to the brokerages, cross-selling opportunities for other products and services abound.

So how do wirehouse reps and advisor compete against such deals? Well, it’s relatively easy when Schwab’s the opponent. The firm’s free deal applies only to online transactions in a handful of funds. A Schwab customer can build only the most basic portfolio with the commission-free portfolios.

Since there’s no commission-free debt funds, income-hungry investors are left out in the cold. That leaves maneuvering room for advisors hoping to serve conservative or older investors.

So, there’s still an opportunity for advisors to sell professional asset allocation to the prospective customer. That’s the value-for-money proposition: What’s a customized plan, access to a diverse universe of products and constant portfolio monitoring worth?

The Fidelity offer is more challenging. The wide swath cut by the iShares products makes it possible to build very sophisticated portfolios. Like the Schwab offer, commissions are waived only for online trades, though. Hand-holding of any sort carries a cost. Advisors must be able to reasonably price the value of their hand holding -- face-to-face meetings, phone calls, reorg assistance, etc. -- over the course of a year. Can the cost be justified by an asset management fee? With an asset management account, the customer can get an unlimited number of transactions done without piece-by-piece charges.

Advisors’ toughest competitor is clearly Vanguard. Vanguard’s effectively priced hand holding at zero for its ETF platform. How does one compete against that?

Perhaps one doesn’t. Many money management prospects are not, and don’t expect to be, self-directed. These prospects aren’t found in the same spaces Vanguard typically trolls. Advisors hoping to realize a value for their services need to work harder nowadays to present themselves before prospects used to and willing to pay for competent and professional financial management.

It’s that “competent and professional” handle that separates top-flight advisors from call center order takers. Experience gleaned over years in the business, a clean CRD/ADV and educational distinctions such as CFP, CFA, ChFC, CRPC or RFC designations especially raise an advisor above the hoi polloi. It’s only the most talented and well-resourced advisors who are able to truthfully tell their prospects, “You get what you pay for.”