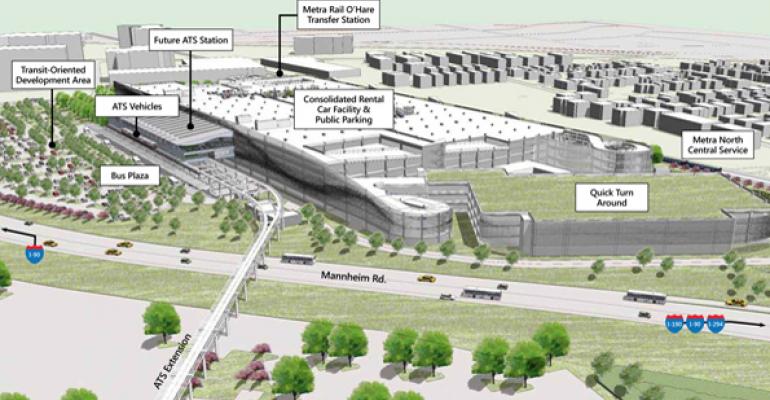 CHICAGO—The U.S. Department of Transportation has invited Chicago to apply for a federal loan for the construction of an $884 million new public and commercial transit hub at O’Hare International Airport.

A Transportation Infrastructure Finance Innovation Act loan of $292 million, in combination with previously issued and authorized general airport bond revenues would make available the funds to finance an $884 million multi-modal development project that would consolidate rental car functions as well as public parking into a multi-level structure and provide for an extension of the Airport Transit System (ATS) at O’Hare.

The proposed CRCF will provide nearly 4,100 rental car company parking spaces, utilizing the floors one through three, a customer lobby on a portion of the fourth with remaining space and floors designed for approximately 2,000 public parking spaces. Each of the rental car companies operating within the CRCF will have exclusive-use customer service counters, self-service kiosks, and back office areas within the facility

According to a city statement, moving rental car companies out of dispersed locations and investing in the ATS will lead to greater transportation relief, efficiency and sustainability at the massive airport. The extension and creation of a new ATS station will for the first time provide a major access point for travelers to and from O’Hare by enhancing transportation connectivity between rental cars, public parking, public roadways, CTA and Metra. These measures as well as expanding the ATS vehicle fleet will reduce vehicle traffic at terminal curbs, eliminate an estimated 1.3 million vehicle trips on terminal roadways each year, resulting in enough energy savings to power more than 600 homes every year and in turn lessen O’Hare’s environmental impact.

“President Obama has called on us to rebuild and upgrade our infrastructure so travelers and businesses can get where they need to go safely and efficiently,” said Secretary of Transportation Ray LaHood in the statement. “O’Hare plays a critical role in the transportation system for the region, and we are pleased to invite the City of Chicago to apply for a TIFIA loan to improve mobility and sustainability around the airport.” 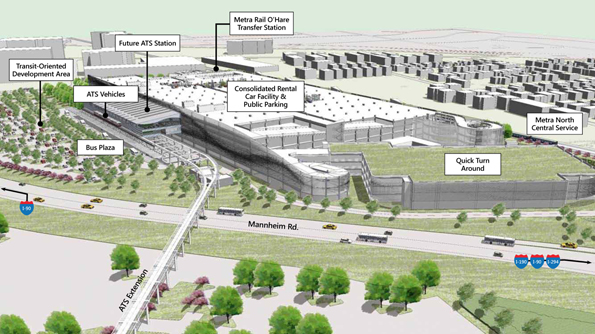