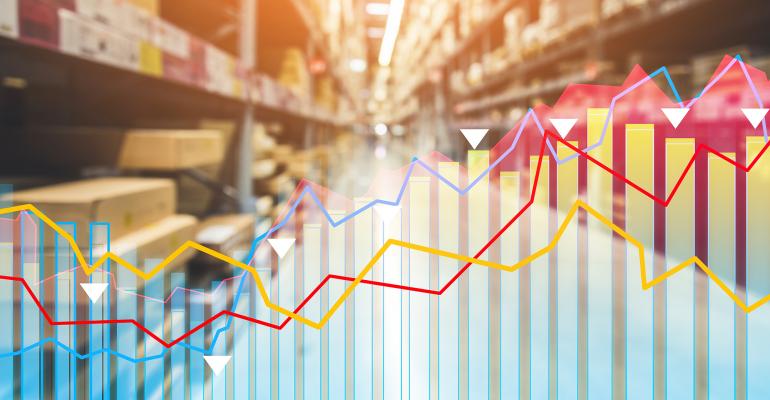 Industrial Strengthens its Hold as a Favorite Among Net Lease Investors

Many respondents in this year’s exclusive WMRE research identified industrial as among the most popular net lease property types.

The net lease property sectors that experienced the biggest increase in sales volume in 2021 were industrial and retail. Industrial sales increased 75 percent over 2019 activity with $37.3 billion in transactions. Net-leased retail volume totaled $18.3 billion in 2021, a 65 percent increase over 2019, according to JLL.

Investor sentiment in WMRE's annual net lease investment research, is tracking with sales activity. More than half of respondents (54 percent) said industrial was the sector in greatest demand from investors, followed by medical office/healthcare at 38 percent and restaurants/fast food at 24 percent. (Respondents were able to select up to three property types.) Those property types least in favor were office and fitness, each at 6 percent, and auto at 7 percent. When looking at the history of survey results, demand for industrial has seen the biggest improvement, jumping from 24 percent in 2016 to its current level. In comparison, drugstores have dropped from a high of 40 percent in 2016 to 20 percent. That decline in sentiment for drug stores could be influenced by the 2021 announcement that CVS would be closing some 900 stores over the next three years.

Coming out of COVID, investors have a strong appetite for “essential” properties, such as grocery stores, convenience stores, quick-service restaurants and auto. What is out-of-favor is anything that is non-essential, such as entertainment venues, movie theaters and gyms. Those businesses are coming back, but they are less desirable to investors, notes Mark E. West, a senior managing director in the Dallas office of JLL Capital Markets, Americas and co-leader of the firm’s national Corporate Finance & Net Lease group..

Following a strategic decision in 2019 to increase its exposure to industrial, Spirit Realty has been an active buyer in both industrial and retail. Although a majority of its portfolio, roughly 70 percent, is retail, acquisitions the company has made over the past 12+ months have been fairly evenly split between industrial and retail. “Not all retail is equal, but we’re still happy with certain parts of retail,” says Ken Heimlich, chief investment officer at Spirit Realty Capital Inc. For example, gyms and fitness centers is a sector that struggled during the pandemic. “We still like fitness, it just has to be the right operator,” he says.

It’s no surprise that industrial topped the list when respondents were asked to rate the 12-month outlook on property sectors. Based on a rating scale of 1 to 5 with 5 being “excellent” and 1 being “poor” industrial rated a 4.1, followed by medical office/healthcare at 4.0 and grocery at 3.8. Those sectors that rated the lowest were office at 2.8, fitness at 3.0 and bank/financial and government each at 3.2.

“Based on structural trends, people believe the future is exceedingly bright for industrial. Industrial throughout the pandemic saw incredible inflows of equity capital into that asset class, and that continues today, which is pushing yields on an unleveraged basis to all-time lows, sometimes into the 3 percent cap rate range, which is really unheard of,” says BJ Feller, a managing director and partner at the Stan Johnson Company.

It also is notable that respondents are more bullish on the outlook for net lease property sectors almost across the board. Views on the 12-month outlook remained the same or moved higher in all but two sectors as compared to the 2021 survey. The two sectors that declined were government leased assets, which dropped from 3.8 to 3.2 and bank/financials, which dipped slightly from 3.3 to 3.2.

Buyer demand for government-leased assets is dependent on the use and branch of government.  Essential government uses such as a VA hospital is going to be more in demand than a generic government office or a post office in a small town, notes West. In addition, there is still good demand for bank branches that have a good credit tenant, such as JPMorgan, Chase and Bank of America. “Buyers want really good locations and they’re going to drill down to the deposit base at that location,” he says. “If those factors are strong, then the asset will trade very strong.”

The full version of net lease investor research, brought to you by W.P. Carey, will be published this month.