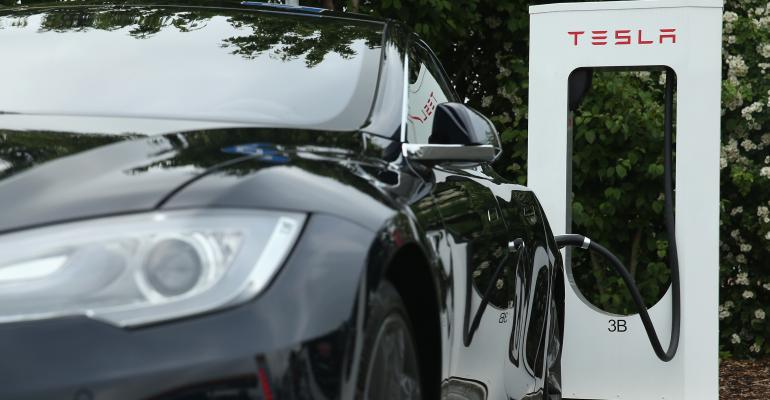 An embrace of globalism and some clean-energy shares made this U.S. technology fund great, again.

(Bloomberg View) --President Donald Trump invoked "America first" by pulling the U.S. out of the Paris climate accord, promising to revive the coal industry and repeatedly tweeting himself as the author of the 105-month-old bull market. The nation's top money manager of 2017 took the opposite path to becoming No. 1 and says it's better to be lucky than smart. Meet Charlie Chai, the 40-year-old Dartmouth graduate who joined Boston-based Fidelity Investments out of college in 1997. He runs the Fidelity Select Technology Portfolio from an office in Hong Kong, where he moved in 2011 because he wanted to be close to the market where the supply and demand for technology is growing faster than anywhere else. His fund is among the 208 biggest U.S. equity mutual funds, defined as those investing at least 70 percent of a minimum $5 billion in domestic stocks, either through active or passive indexed assets, over three years or more. Chai led that group this year, returning more than 50 percent since Jan. 1, and over the past three years with an 83 percent return since the beginning of 2015, according to data compiled by Bloomberg.

With 10 days remaining in the year, Chai is beating the world with an annual return of 52 percent. That's almost twice the 28 percent rise in the Dow Jones Industrial Average and the 22 percent increase in the S&P 500. Among the 855 mutual funds worldwide with total assets greater than $5 billion, Fidelity's Chai is ahead of all of them, including his closest U.S.-based competitor, the $5.4 billion T. Rowe Price Science & Technology Fund, which has returned 41 percent so far this year, according to data compiled by Bloomberg. "A fair amount of that has to go to luck," Chai said in a telephone interview this week, explaining that his standard investing strategy simply produced unusually strong results in 2017. "It's just this year everything kind of worked, and not every year can everything work at the same time."

Chai's portfolio overrepresented consumer discretionary stocks by 9 percentage points and underrepresented information technology shares by 15 percentage points compared to the benchmark MSCI US IMI Information Technology Index. Software and services increased to 50 percent of the portfolio from 44 percent in 2016, with PayPal rising to 1.4 million shares from 8,100 and Facebook increasing to 2.3 million from 1.6 million, according to data compiled by Bloomberg. Hardware stocks declined to 16 percent from 22 percent as Chai sold all 1 million of his Cisco shares.

The biggest driver in Fidelity Select Technology proved to be autos. Tesla shares became Chai's biggest movers and contributed one-tenth of his fund's superior performance as he tripled his Tesla holding from the end of 2016, when the stock fetched $213, or 35 percent less than its current price. Chai held 868,000 Tesla shares this fall after purchasing 81 percent of his new Tesla stock in the first quarter, when the price soared by 30 percent, according to Bloomberg portfolio and risk analytics data.

"Tesla is one of my biggest bets in the funds throughout this year" Chai said, comparing the company to "Apple from 10 to 12 years ago." He elaborated:

I think the auto market is clearly bigger than the handset market and the smartphone market for sure. And [Tesla] will over time generate a lot more gross profit dollars than the entire handset market. I think the real question is, "Do you believe in electric vehicles as a better substitute than internal-combustion-engine cars?" From the math I've seen and the work I've done, within the next three to four years, we will come to a point where electric vehicles from a total cost of ownership and from an initial ownership perspective will be equal or cheaper than the internal combustion engine.

Chai predicted that Tesla's earnings per share could increase by $20 or more by 2020, even after suffering the $9.10 loss estimated for 2017 by analysts surveyed by Bloomberg. That's partly because Tesla, in Chai's estimation, leads its competitors in technology, data-collection techniques and the quality of its data scientists.

Chai also increased his Apple holdings by 28 percent, to more than 3.8 million shares in the 10 months ended Oct. 31, a decision that was largely responsible for Fidelity Select outperforming its T. Rowe Price rival, which owns no Apple shares. Apple climbed 51 percent in 2017, buoyed by "international sales something like 60 percent to 70 percent of its revenue in any given year," Chai said, noting that "its biggest market outside the U.S. is China."

The contrast to Trump's America-first worldview is impossible to miss. "Tech, by its nature, is very, very global," Chai said.