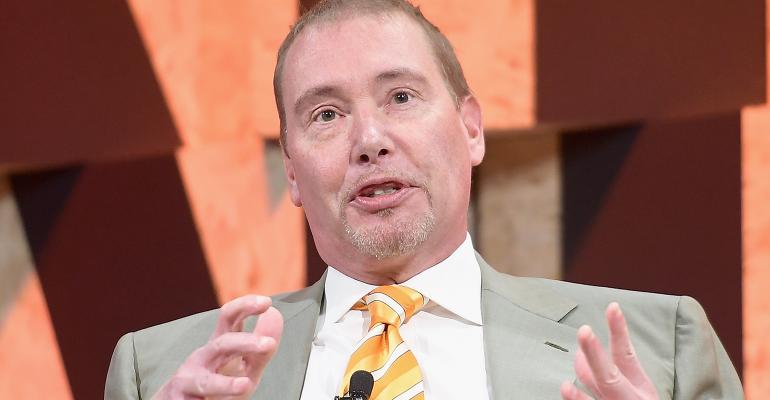 (Bloomberg) -- It was one of the ugliest breakups the money-management business had ever seen -- a tabloid tale of ego and betrayal.

But a decade after the star investor known to his staff as “the Godfather” stunned Wall Street with his bitter split from TCW Group and creation of a rival firm, the verdict is in:

His DoubleLine Capital, which turns 10 this month, today sits atop roughly $150 billion. In a business increasingly dominated by inexpensive index funds, the young juggernaut succeeded by actually picking good investments. Along the way, its flagship bond fund beat its benchmark in every year but one.

DoubleLine’s first decade was so good that it’s not unreasonable to ask: can Gundlach possibly top this, and can anyone match it? At 60, he is a rare breed in mutual funds: a successful, 21st-Century founder. Many mutual fund managers have faded from public view, but markets hang on Gundlach’s pronouncements with a fervor these days usually reserved for hedge fund titans.

“There aren’t that many famous managers today,” said Howard Marks, the billionaire co-founder of Oaktree Capital Management, whose firm paid $20 million for a 20% stake in DoubleLine when it started. “That probably argues against somebody else having as effective a startup.”

Turmoil at bond giant Pacific Investment Management Co. following the 2014 ouster of Bill Gross helped DoubleLine succeed. As has Gundlach’s fame. He was already a star when he and more than 40 colleagues departed TCW to start the new firm, a move that led to a bitter dispute and a trial that was finally settled out of court. TCW’s assets over the past decade nearly doubled to $211 billion, including $30 billion from the purchase of MetWest.

For Los Angeles-based DoubleLine, it’s been mostly about performance: the firm’s Total Return Bond fund is up 5.9% a year on average since its 2010 launch, outpacing its benchmark’s 3.8% annualized gain. Its latest darling, the DoubleLine Shiller Enhanced CAPE fund, has risen 15% a year since it opened in late 2013, beating the S&P 500 Index’s 12% increase.

Gundlach’s investing relies on choosing securities and limiting risks such as interest rate fluctuations and other volatility. His outlook is shaped by a deep team of portfolio managers who have worked together for an average of 16 years. In an industry known for high turnover, DoubleLine has remained stable, with only one major defection.

“Having a name and face as prominent and successful as Jeffrey Gundlach has added value and helps the firm continue to gather assets,” said Todd Rosenbluth of CFRA Research. Focusing on under-followed pockets of the market also helps, he said, citing mortgage securities in the Total Return fund.

There are some warning signs when it comes to the flagship’s performance, however. While Total Return has beaten its index every full year except 2016, it’s lagging the benchmark in 2019 as well as over the past three years, according to data compiled by Bloomberg. The largest gains came in the first few years, as the U.S. economy rebounded from the housing crisis.

Gundlach’s business success -- he’s personally worth an estimated $2 billion -- may also be hard to replicate in the future. Index funds that passively track benchmarks continue to gain popularity thanks to low fees and market-level performance.

More mutual fund firms left the industry than entered from 2016 through 2018, according to the Investment Company Institute, the biggest three-year stretch of net exits since the aftermath of the 2000 tech crash. This time closings are coming during a bull market.

Compliance costs for rules brought in following the financial crisis are more burdensome for small operators, according to Sean Collins, ICI’s chief economist, making it harder for startups.

Another challenge for would-be Gundlachs is that shifts in the industry have driven advisers to recommend funds with the lowest fees rather than the best total returns, Collins said. While DoubleLine’s expense ratios are roughly in line with its peer group, according to Morningstar Inc., they’re well above the average passive fund.

“The barriers to entering the big leagues of investment management are high,” Gundlach said this week by email. But, he said, “there is always demand for superior risk-adjusted returns.”

While DoubleLine’s chief executive and chief investment officer is still the top draw, he has been diversifying the firm’s co-managers and fund lineup.

In 2016, he named Jeffrey Sherman, who helped lead development of new equity, commodity and real estate funds, as deputy CIO. In July, DoubleLine promoted Andrew Hsu to co-manager of Total Return. Any active strategy brings “key man risk,” but the firm can position itself to keep thriving if Gundlach eventually retires or steps away, said CFRA’s Rosenbluth.

“DoubleLine will strive to perform for our investors over the next 10 years as we have over the past 10 years,” Gundlach said.