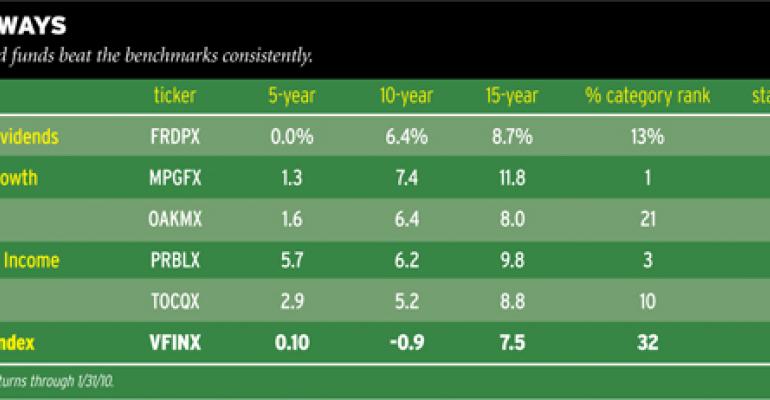 Active Funds that Take Less Risk than Their Indexes

Investors have been pouring into index funds of all varieties, including portfolios that track emerging markets and municipal bonds. But much of the attention has focused on funds that fit in the large blend box. Popular choices include Vanguard Total Stock Market Index (VTSMX) and Fidelity Spartan 500 Index (FUSEX). Of the $895 billion invested in large blend funds, 46 percent is in passive funds, according to Morningstar.

Plenty of advisors use index funds for the large blend portion of portfolios. The advisors argue that it is difficult for active funds to outpace benchmarks in a category that is dominated by well-known blue chips. Still, there is a strong case for using top active funds. Some of the best large blend managers take less risk than the benchmark, as measured by standard deviation. That enables the funds to outperform in downturns, an important consideration at a time when clients worry about protecting their savings.

In addition, some stellar active managers have outdone the S&P 500 for long periods. Below are descriptions of funds that have beaten the benchmark for the past 15 years. Because the managers all follow consistent disciplines, there is good reason to expect that they can continue their winning ways.

Winners
Parnassus Equity Income (PRBLX) boasts a remarkable record, outpacing the S&P 500 by a wide margin while taking less risk, as indicated by standard deviation. Portfolio manager Todd Ahlsten has achieved the results by sticking with high-quality businesses. He aims to buy companies that dominate their niches and seem poised to grow for years. “We want companies that can grow faster than the economy because their products will be relevant to our lives for the long term,” he says.

The Parnassus holdings have strong returns on equity and healthy balance sheets. Ahlsten only makes purchases after prices of his favorite growth champions have dipped because of temporary disappointments.
A big holding is Waste Management, the operator of landfills and recycling centers. The recession has dampened demand for recycling, but Alsten figures that the business has enormous long-term growth potential.

Another steady fund is Oakmark I (OAKMX). Since the fund started in 1991, it has outperformed the S&P 500 during every year when the benchmark fell. The consistent showing is the result of a cautious strategy. Portfolio manager Bill Nygren aims to buy stocks that sell for two-thirds or less of their fair values. Typically his companies have reported a disappointing quarter or two, but the businesses seem poised to grow over the next three to five years. “Most investors are trying to outguess the market over the next quarter or year,” says Nygren. “We are trying to look at how a company is likely to change over the next five years.”

A favorite holding is semiconductor giant Intel. The shares have languished because investors worry about weakened demand for technology products. But Nygren argues that sales will revive in the next five years, and Intel will remain a dominant force because it spends heavily on research and development.

Mairs & Power Growth has thrived by putting most of its assets in high-quality companies that are based near the fund’s Minnesota headquarters. Before making an investment, portfolio managers visit companies as well as talking to suppliers and customers. “We get to know the companies extremely well,” says portfolio manager Mark Henneman.

While other funds may seek high flyers, Mairs & Power prefers companies with growth prospects in the high single digits or low double digits. Such modest growth can be sustained for years, Henneman figures. After buying a stock, the fund holds indefinitely. The average annual turnover is less than 5 percent.

The portfolio is full of rock-solid holdings, such as 3M. Henneman says that the company dominates many businesses. Spending heavily on R&D, 3M has good growth opportunities, he says.

Tocqueville Fund (TOCQX) is a diehard contrarian. Portfolio manager Robert Kleinschmidt favors companies with sound balance sheets that have faced temporary problems. He only buys out-of-favor businesses that seem likely to return to their normal margins over the next three to five years. “We are not looking for financial basket cases,” says Kleinschmidt. “Our companies are sound enough that they have time to work their way through whatever issues they have.”

After oil prices collapsed late in 2008, energy stocks tanked. That gave Kleinschmidt an opportunity to buy some high-quality names in the sector, including Schlumberger, the oil-services giant.

Franklin Rising Dividends (FRDPX) ranks as one of the tamest large blend choices. The fund only buys blue chips that have increased their dividends in at least eight of the past 10 years. Such reliable performers usually prove resilient in downturns. That has enabled the fund to post a low standard deviation. During the downturn of 2008, the fund lost 27.2 percent, 10 percentage points ahead of the S&P 500.

Holdings include such well-known names as consumer giant Procter & Gamble and International Business Machines. Those steady stocks can protect investors during erratic markets.