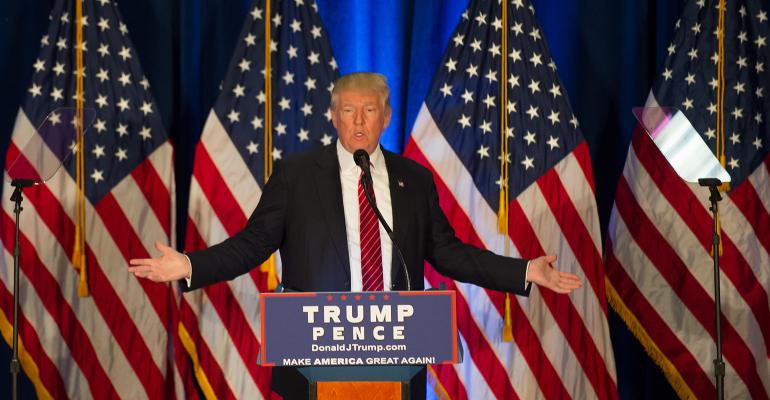 A $46 Billion Finnish Fund Manager Is Very Worried About Trump

(Bloomberg) -- There’s at least one fund manager who’s very worried about the possibility of Donald Trump becoming the next U.S. president.

Risto Murto, the chief executive officer of Finland’s Varma Mutual Pension Insurance Co., which oversees 41 billion euros ($46 billion), says any conventional assumptions on monetary policy, the size of the U.S. budget deficit and the geopolitical landscape go out the window if Trump wins. He warns that the surprise outcome of Britain’s June vote to leave the European Union should be a lesson to those who say it won’t happen.

“If Trump wins the U.S. presidential elections, it will definitely have an impact on monetary policy. With Hillary Clinton, it would be business as usual. With Trump, it’s totally different,” Murto said in an interview in Helsinki.

“It’s very hard to predict what will happen if he wins. If we take his proposals at face value, then that means the U.S. will suddenly have a deficit the size of Greece’s,” he said. “How things will go with Trump remains an open question and the risk is that we get something similar to what happened with Brexit, namely that we’re underestimating things.”

A key concern is how a President Trump would tackle the Federal Reserve, Murto said. The self-described billionaire has said he would probably replace Fed Chair Janet Yellen, when her term ends in 2018.

Trump has accused Yellen of having political motives for waiting with interest rate increases. Her plan is to ensure “the next guy or person who takes over as president could have a real problem,” Trump told Bloomberg Politics in October.

Then there’s fiscal policy. “If one assumes that Trump is actually able to execute his policy, that means that fiscal policy will become extremely expansionary, which would imply a need for a more restrictive monetary policy. That’s not something the market is pricing in at this point, and I hope they end up being right,” Murto said.

The real estate mogul and reality television personality has referred to his package of proposals as an opportunity for America to go through an “ economic renewal.” He wants to cut taxes more than his Democratic opponent and to impose a moratorium on new agency regulations, measures his advisers estimate will help boost U.S. economic growth to 4 percent annually. An expansion rate at that level will help limit the revenue cost of Trump’s tax plan, they say.

The Republican nominee also plans to impose curbs on trade, including extracting the U.S. from the Trans-Pacific Partnership. Clinton has also said she can’t support the TPP, in part because it doesn’t do enough to support American workers.

“The biggest geopolitical risk as I see it is the risk of populism,” Murto said. “If the U.S. chooses to elect a populist president, the implications can be even more concrete than with Brexit. It means that the golden era of globalization and the free flow of capital and trade are now in danger.”

U.S. voters with investments in stocks and mutual funds are losing confidence in Trump when it comes to their portfolios, with a growing share saying they would alter their asset mix if he’s elected president. A Bloomberg Politics/Morning Consult poll found registered voters with money in the market narrowly pick the Republican over Clinton, 42 percent to 40 percent. That’s down from a Trump advantage of 50 percent to 33 percent when a similar survey was taken in June.

Murto, whose fund has more than 30 percent in North American assets, says he ultimately expects the U.S. system of checks and balances to ensure that economic policy doesn’t end in chaos. “We still have a great deal of trust in the U.S. private sector,” he said. “We still believe that they have enough checks and balances in place.”

But the prospect of some form of global monetary policy normalization may ultimately be a distant one.

“One market that was giving us a little bit of hope was the U.S., but now even that is a question mark,” Murto said.