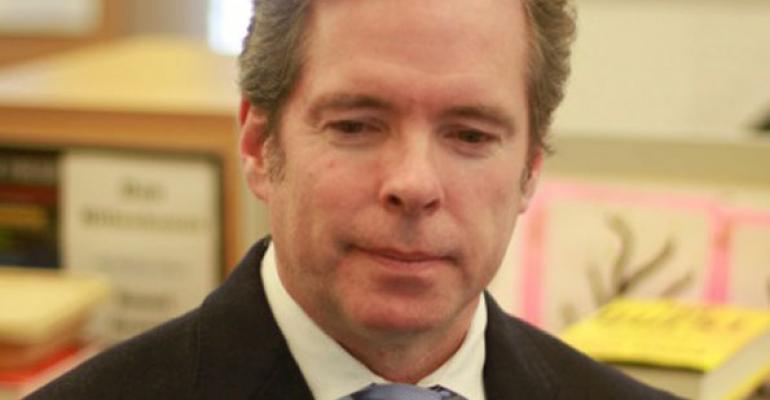 From the investors' POV: Wall Street is ‘Terribly Conflicted’

The Motley Fool is an online community that champions shareholder values and advocates for the individual investor. But it does so in a humorous and amusing way. The company got its name from the Shakespeare play As You Like It, in which wise fools both instructed and amused. Perhaps Wall Street could take a page out of the Fool&rsquo;s book. John Reeves, a research analyst at The Fool, provides an opinion from the other side of the table&mdash;the investor&rsquo;s. He believes Wall Street brokerages should be more responsive to their customers, and he has a preference for fee-only investment advisers.

WealthManagement.com: How do you think the advisory industry will evolve?

John Reeves: The higher-end people have some pretty solid independent investment advisers that they work with who have a fiduciary standard, and I can see that segment actually growing, as opposed to the traditional Merrill Lynch/Bank of America or some of the traditional Wall Street brokerages. I personally feel we’re moving away from the Wall Street brokerage model where it doesn’t seem to be serving individual as well, and we’re moving into either a do-it-yourself, or pay up for high quality responsible advice.

WealthManagement.com: Do you think that Wall Street brokerage model will die out?

JR: I don’t think it’ll ever die out. Those companies do have a lot of scale and resources, and they’re on the ground, so to speak. They’re large and well-connected. So I don’t know, but I do feel that they need to become more responsive to their customers. Right now they’re terribly conflicted, and I don’t think they always put individual investors first. And I think A—that’s a shame, and B—that seems like bad business to me. I know some of these Wall Street firms have been pretty successful in that over the years. It’s a bit of editorializing on my part, but I’m not impressed by some of the work that these brokers are doing.

WealthManagement.com: From what you’re hearing out there in the marketplace, what are investors’ biggest gripes about working with advisors?

JR: There’s a lot of free-floating hostility towards Wall Street, and you see with the Facebook IPO process. People are angry, and feel they’re taken advantage of. And I think there’s that general sense maybe unfairly paints the entire financial industry.

WealthManagement.com: At The Motley Fool, you’ve written a lot about advisor compensation and performance. What’s your preference for how advisors should be compensated?

JR: We deliberately try not to be too prescriptive about these things because we recognize that each individual has a unique set of circumstances. We tend to be on the side of an independent investment adviser with a fiduciary standard than say a broker without that fiduciary responsibility. We tended also to think that fee-only financial advice was probably superior to commission or some sort of hybrid model. And then to take it further, how do you know? You have to ask. That whole communication piece, which seems so simple, also seems fundamental. Many of us who’ve gone through the process of working with a financial advisor know that sometimes those conversations are hard.

WealthManagement.com: Why do you have that preference for fee-only investment advisers?

JR: We talk to a lot of professionals like Josh Brown, Carl Richards, and Terrance Odean, and folks like that. And that tended to be the consensus of the people we talked to. But at the Motley Fool, as a company, we’ve always been critical of commissions, which seem to incentivize trading and activity. We tend to really value a long-term time horizon and not that trading mentality. To the extent that anything like a commission-based fee structure would encourage that, which it would seem to be, then we kind of see that negatively.

WealthManagement.com: What should investors know about advisors these days that they don’t know?

JR: People have no idea of the very basics—for example, what’s the difference between an investment adviser and a stockbroker, who are often called financial advisors as well. To quote Josh Brown’s book, Backstage Wall Street, ‘it’s a zoo out there,’ with stockbrokers, investment advisers, financial planners, wealth managers, life planners. There are all these titles, but it’s not clear to investors whether some of these folks have a fiduciary standard or not. To be succinct, I think investors need to know who they’re dealing with and what the responsibilities of that professional are toward the individual. And I don’t think the industry’s doing a very good job, whether it’s by design or neglect. I think ordinary investors just don’t have a sense of what they’re getting when they’re sitting down with these professionals.

WealthManagement.com: How do you think advisors could do a better job of that?

JR: One of the things that we advise our readers is that, I think that the individual has to kind of seize control and ask the right questions. But flipping it and going to how could the advisors do a better job, I think just being up front at the very beginning. So the very first conversation should be, ‘Hey, I have a fiduciary responsibility towards you,’ or not, and in addition, ‘Here are my fees.’ I think the advisors and planners should be very up front about how they get paid and whether it’s total assets under management, or whether it’s through commissions, or whether in some cases, there are combinations of both. Too often the individual doesn’t know, and maybe sometimes they’re hesitant to ask, or they’re afraid of appearing ignorant, or maybe they’re just too polite. But I think that’s a real problem.

WealthManagement.com: Do you think that individual investors are not hard enough on advisors?

JR: I would say that that’s probably one of the biggest challenges facing the industry is that it doesn’t seem to me that there’s a very good way of evaluating performance. Obviously, there’s the quantitative approach of ‘Hey, how have you done managing my money?’ and if you look at it from a purely returns perspective. That gets hard because of allocation and diversification and other issues that might affect returns, versus whatever the appropriate benchmark is. But then there’s the qualitative, ‘Hey, do you have me in the right retirement account? And do I have the right kind of insurance? Am I contributing the right amount?’ So I sometimes wonder if that’s one of the biggest challenges that maybe individual investors don’t have enough information to really make a good evaluation of their advisor.

WealthManagement.com: At The Motley Fool, you’re all about giving advice to individual investors. Do you prefer the do-it-yourself model for investors or do financial advisors and the advice model have a place?

JR: One of the nice things about The Motley Fool community is that we don’t really have a one answer for everything. I can say that a lot of our readers and community members are real do-it-yourselfers. But I think a lot of people benefit from a financial advisor. Retirement, saving for colleges, making sure you’re contributing the right amount and being aware of taxes, it’s all complicated stuff. I would that working with an advisor is probably beneficial to a lot of people, and that’s why making sure you’re working with the right one and you’re aware of what it costs is so crucial. It can also be a very negative experience too, if you’re working with the wrong people.

WealthManagement.com: What do you think advisors are doing wrong these days?

JR: First of all, being very clear that I think there are different types of financial advisors, and that fiduciary standard seems to be a real differentiator. If you’re an advisor and you’re not telling people exactly what it is that you’ll be providing and what sort of fees you’re charging, and if you’re not creating a financial plan and if you’re not designing the investing strategy to fit the person’s goals and risk tolerance, so if you’re ignoring all those things, you’re not serving your clients. There are some people out there that are doing a fabulous job, but there are a lot people out there that aren’t. And we hear horror stories every day about brokers who are running up huge fees and commissions and what have you, and people seeing their nest eggs shrink.