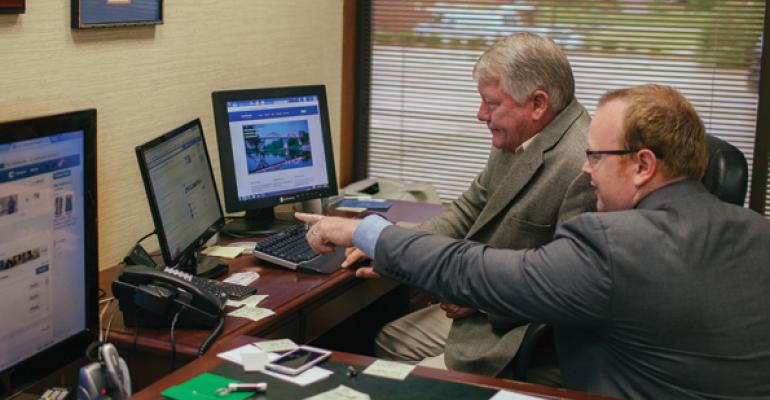 &nbsp;&nbsp;I&nbsp;see a lot of advisors who, say, just want to start smiling and dialing again. That&rsquo;s how they built their business.&nbsp;But it doesn&rsquo;t work that way anymore.&nbsp;

Living and working in Harrison, Ark. (population: 15,000), Ken Savells took an appropriately small town approach to marketing. “I got on the phone and then I met with people,” says Savells, who started his practice Centurion Financial Services in 1999. “I just know a lot of folks in town. It was all through face-to-face relationships.” Savells continued following that tack until about four years ago, when he found he had to spend a lot more time serving clients than gathering new ones.

About a year ago, Savells brought on a much younger advisor and started thinking of expanding into northwestern Arkansas. It was time to remove marketing from the backburner. His new colleague urged him to take a completely new tack: turn to social media. But 62-year-old Savells, who wasn’t even on Facebook, was hesitant to do so, and, in fact, he was highly skeptical of just how useful such a move would be. Figuring he couldn’t do it himself, he hired a coaching firm to help him build a website as well as a presence on LinkedIn and Facebook.

“I’m moving into places where people don’t already know me,” says Savells. “My old way of marketing had to change.”

It happens all too often. You build a reliable business and get so busy tending your flock, you start ignoring new client generation. Then a few years go by and, inevitably, you realize you need to start growing again. Maybe you want to sell the practice. Perhaps you’d like to attract younger advisors. No matter what the reason, you have to start stepping up marketing again.

Certainly, some of your old tactics may still work. But even if you’ve been out of the loop for just a few years, the world undoubtedly has changed and some of the techniques that did the trick so well before simply aren’t enough. “I see a lot of advisors who, say, just want to start smiling and dialing again,” says Carly McCulloch, an executive business coach with Peak Advisor Alliance. “That’s how they built their business. But it doesn’t work that way anymore.”

For many advisors who have put marketing on the backburner, especially those in business for more than 10 years, the fundamental change they face is a cultural one. In a media saturated world, “People don’t like to be sold, “ says Dan Murphy, who has been in business for 27 years and whose Wappinger Falls, N.Y., firm has about $120 million in assets. “It’s part of the new world.”

That was why, after putting marketing on hold for several years, he realized he had to ditch the old-school dinner seminars he used to run, inviting prospects generated from lists he purchased. Instead, he made a few moves, most notably starting a billboard advertising campaign, redoing his website and running twice a week two-hour educational workshops for retirees, charging a $49 per couple admission fee to participate. Since November, Murphy says he’s already landed five new clients.

Frequently, the answer is mixing the old with the new. Take Brian Parker, managing director of EP Wealth Advisors in Torrance, Calif. After he and his three partners bought another firm in 2004, they didn’t necessarily put marketing on hold; they just became too busy to pay much attention. Then, three years ago, in an effort to boost assets to $5 billion by 2020, they hired their first president and started to step up their marketing efforts, in part to attract new clients, but also to make themselves interesting to acquisition candidates.

They started by tossing out old-fashioned seminars. At the same time, they hired a marketing associate to double the number of special events for clients per year and refine their SEO strategy through frequent updates to their website, for example. Parker, whose firm now manages $1.7 billion, says they’ve attracted more clients and seen increased interest from possible merger candidates.

Similarly, when Paul Allen, president of Wealth Strategies Partners in Brentwood, Tenn., which has about $200 million in assets, moved his team to Raymond James earlier this year, he made the most of his b/d‘s web coaching services. He revamped his website to appeal to higher-net-worth clients by adding articles about such topics as taxation and risk. But he also decided to keep running monthly roundtable discussions for clients and their guests that he’s hosted for 15 years.

The biggest stumbling block for many advisors, however, is social media. Like Savells, they’re skeptical that it doesn’t amount to more than just hype. “There are people you have to drag kicking and screaming to the realization they have to do this,” says McCulloch. Often, such advisors can take a while before they understand the importance of using social media to solidify their reputation, at the least, and, at best, to attract real business.

In some cases, the final selling point may be something random. In Savells’ case, what made him a social media convert was a chance conversation with a car dealer. The man was waiting for a customer to come down from Canada to pick up a Cadillac, a transaction that had occurred on the Internet. It was a real eye opener. “That’s what really got my attention,” he says.

Savells also received a push from his young colleague and LPL Financial, his b/d. According to Savells, he got started about nine months ago by following the steps explained on LPL’s website about how to set up accounts on Facebook and Twitter. He then hired coaching firm Peak Advisor Alliance to help with his website and on-going posting of material.

“This is like basic hygiene now,” he says. “For marketing, if you don’t have this stuff, people won’t think you’re for real.”