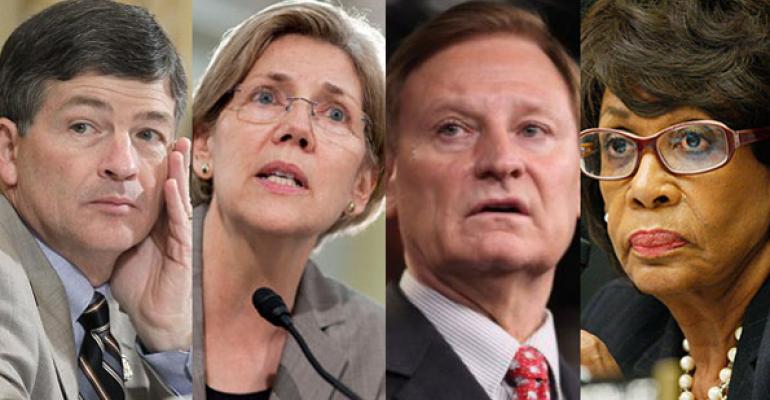 Tuesday’s election keeps Congress split between parties, suggesting not much will change in the trajectory of financial regulatory reform. Yet while control of both houses remains, there will inevitably be some change in the mix of elected officials, both new and returning, serving on key committees that may impact the rules under which financial advisors labor.

“The legislation of the last few years will move forward,” said Stonehill College professor of politics Peter Ubertaccio. But newly elected officials, including Massachusetts Senator-elect Elizabeth Warren, and other changes in key committee leaders will likely affect the pace and implementation of Dodd-Frank provisions, agency budgets and advisor oversight measures.

Democrats will not only hold their majority in the Senate, but increase their advantage with two additional seats to bring the total to 53. That advantage could be bolstered with independents Sen. Bernie Sanders of Vermont and Senator-elect Angus King of Maine.

With the Democrats holding the Senate, Duane R. Thompson, a senior policy analyst at fi360 Inc. said that the majority bloc would act as a “fortress opposing change to Dodd-Frank.”

Pressure to continue regulatory reform in the financial services industry will likely be spurred by Senate Committee on Banking, Housing, and Urban Affairs, experts said, adding that shuffling within the Securities, Insurance and Investment Subcommittee was also worth watching.

Should Shelby leave, Mike Crapo, R-Idaho—currently serving as the ranking member of the Securities subcommittee—may be tapped to replace him, Tittsworth added. Crapo voted against Dodd-Frank in 2010, saying the legislation failed to address the crisis and a new, expensive and excessive government bureaucracy.

In addition to the possible changes in current members, many observers expect Democrats will give Senator-elect Warren a spot on the committee. Warren, a law professor at Harvard and former chair of the congressional oversight panel for the Troubled Asset Relief Program, has been an outspoken critic of banks and Wall Street, and helped to champion the Consumer Financial Protection Bureau but then left Washington when it was clear she would not get enough support from Republicans to head the agency.

“We should put real cops on the financial beat in the Commodities Futures Trading Commission and the Securities and Exchange Commission, cops with the resources they need to patrol for fraud and sustain tough prosecutions,” Warren wrote on her campaign website.

But it's not clear how strong her influence would be at first. Thompson noted that at the end of the day, she was still just a junior Senator from Massachusetts and the “clubby” nature of the Senate may slow her gaining immediate political capital and sway.

Neil Barofsky, the former inspector general for TARP and author of “Bailout” disagreed, saying that Warren’s background and personality put her in a unique position to work for reform without having to keep her head down at first.

“My bet is that Warren will use her newly minted Senate platform to continue her demonstrated commitment to being a loud and passionate advocate for those whose voice is often not heard in Washington, even if it means offending the sensibilities of some of her new colleagues,” Barofsky said.

“The fact that she comes with the reputation that she has and won with an 8-point lead gives her a certain amount of political capital,” Ubertaccio concluded.

The Republican-controlled House will also see some changes in the coming months that will also impact the Dodd-Frank financial-reform legislation, including proposed legislation aimed at solving the SEC’s inadequate oversight standards for advisers.

The House Financial Services Committee, a major force behind several proposed reform initiatives, may experience a change in direction when Chairman Spencer Bachus, R-Ala., steps down at the end of this year when his term expires.

During his term, Bachus worked to establish a self-regulatory organization to oversee advisors through the Financial Industry Regulatory Authority, introducing the Investment Adviser Oversight Act of 2012.

Following Bachus’ departure as chairman, Sen. Jeb Hensarling, R-Texas, is expected to step up, Thompson said. Unlike Bachus, Hensarling has focused on government sponsored enterprise reform, seeking to improve institutions such as Fannie Mae, Freddie Mac that help fund mortgages in the U.S.

“Chairman of a committee is a key spot,” Tittsworth said, adding that if tapped, Hensarling would have the “power of the gavel.”

Meanwhile Maxine Waters, D-Calif., is set to replace ranking member Barney Frank, D-Mass., who is widely known for his work on the Dodd-Frank Act.

Waters— the second-ranking Democrat on the House Financial Services Committee after Frank—has a history of focusing her legislative efforts on investment adviser oversight. In July, she introduced the Investment Adviser Examination Improvement Act of 2012, a bill that would give the SEC the authority to impose and collect user fees on investment help fund and increase the number of exams given by the agency.

The measure was introduced as a “cost effective” alternative to Bachus’ bill seeking to establish a self-regulatory organization. Waters cited a study by the Boston Consulting Group that found a SRO may cost twice as much as funding an enhanced SEC examination program.

“The SRO issue will not go away,” Tittsworth said, but added that this was a” period of uncertainty” until the final committee slates were released and new leaders set their agendas.