https://www.wealthmanagement.com/sites/all/themes/penton_subtheme_wealthmanagement/images/logos/footer.png
Recent
Recent
How to get Published in Trusts & Estates and on WealthManagement.com
Feb 20, 2020
How 95% of Decisions Are Made
Feb 19, 2020
LPL Fully Marries ClientWorks Account Opening Tool with AdvisoryWorld
Feb 19, 2020
Helping clients meet liquidity needs without disrupting investment strategies
Feb 19, 2020
Lessons From the Fastest-Growing Firms
Feb 19, 2020
Featured
The Slow Demise of Mutual Funds
Dec 10, 2019
Ten Best Business Books of 2019 for Financial Advisors
Nov 14, 2019
The Top Colleges for Financial Planning
Oct 03, 2019
The 10 Most and 10 Least Valuable College Majors
Aug 28, 2019
Bloomberg
brought to you by 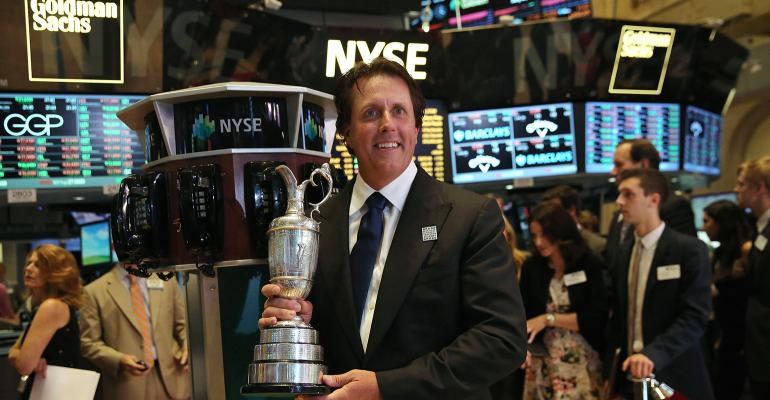 <p>Phil Mickelson brought the Claret Jug to the floor of the New York Stock Exchange after winning the British Open in 2013.</p>
News

In Mickelson Approach, SEC Claims No Wrongdoing but Wants Cash

(Bloomberg) -- Even as Phil Mickelson agreed to surrender almost $1 million in what the government called ill-gotten stock market gains, his legal team claimed a victory.

The three-time Masters winner wasn’t charged with any wrongdoing. Two others were accused of insider trading and other offenses Thursday in a years-long scheme that sent one lucrative stock tip Mickelson’s way.

Prosecutors and regulators announcing those charges were barraged with questions about their decision-making regarding Mickelson, including how authorities could claw back money from him if they didn’t say he’d done anything wrong.

The U.S. Securities and Exchange Commission characterized Mickelson as a so-called relief defendant, saying he was “unjustly enriched” and should surrender those gains. The SEC’s enforcement chief, Andrew Ceresney, said Mickelson traded and made money on tips obtained by others.

“You shouldn’t get to profit from money made on the illegal conduct of others,” Ceresney said.

But Mickelson personally engaged in stock trading and made a profit, the SEC said, based on a tip he received. That’s different from an unknowing wife or child whose accounts are used to stash illicit profits, said Stephen Crimmins, a former SEC enforcement attorney who is now a partner at the law firm Murphy & McGonigle.

For Mickelson, it’s an outcome that allows him to avoid a taint that could endanger rich sponsorships with companies including KPMG LLP and Callaway Golf Co., which both said Thursday they would continue their relationships with him.

For the SEC, it’s an approach that may open the door to future complications in other cases. Defense attorneys may seek the “Mickelson treatment” for clients who said they don’t know where stock tips came from or if anyone got a substantial benefit for giving them, some lawyers said. Other defense counsel could balk at having clients return money in the absence of allegations of wrongdoing.

In using the relief defendant status, “the SEC is seeking trading profits without having to prove the trader did anything illegal,’’ said Thomas Zaccaro, a former SEC enforcement attorney who is now at Zaccaro Morgan LLP in Los Angeles. “It’s certainly unusual.”

In its complaint, the SEC painted Mickelson -- who has earned tens of millions of dollars from golfing and sponsorships -- as an infrequent stock trader. He had less than $250,000 in his brokerage account in the summer of 2012, when he exchanged some text messages with his friend William “Billy” Walters, a Las Vegas gambler.

In its criminal case unveiled Thursday, the Justice Department said Walters had received tips about Dean Foods for years from Tom C. Davis, who was on Dean’s board, including the one passed on to Mickelson.

The U.S. characterized the relationship between Davis and Walters as an open-and-shut insider trading case: Davis gave Walters tips over several years, and Walters helped Davis pay off debts. Walters, through a lawyer, denied any wrongdoing.

Bringing insider-trading cases against tippees beyond such a relationship is challenging. Ask Manhattan U.S. Attorney Preet Bharara, who won 94 such cases in recent years, only to have 14 of them struck down over fine legal points of how much traders must understand about the genesis of nonpublic information they receive second- or third-hand.

The SEC “is seeking disgorgement based, not on a legal theory, but on its own moral or ethical assessment that Mr. Mickelson should not get to keep the money in question,” said Greg Morvillo, a defense attorney who successfully argued the case that helped weaken the government’s hand on insider trading.

Some attorneys wondered if Morvillo’s case, U.S. v. Newman and Chiasson, was part of the reason that the Mickelson matter played out as it did. The federal appeals court in New York ruling requires prosecutors to prove a person knew that a tipster breached a duty to keep information confidential and received a concrete benefit, such as money, in exchange.

"It would seem the Newman issue would apply” to Mickelson, said Samuel Buell, a former federal prosecutor who is now a professor at Duke University School of Law. "He would be in a position to say he didn’t know the details of where this information had come from, and under current insider-trading law, that makes it O.K. to trade."

Lawyers for Mickelson didn’t immediately respond to questions about the Newman ruling. In announcing the charges Thursday against the two men, Bharara and Ceresney declined to discuss how the Newman decision may have come into play for them.

Mickelson, in a statement, pointed out that the SEC’s complaint doesn’t assert he violated any securities laws. ”On that point, Phil feels vindicated,” according to the statement, which said the golfer has “no desire to benefit from a transaction the SEC sees as questionable.”

Mickelson fell short of the high professional and ethical standards of the companies he represents and appreciates that they have determined to continue their sponsorship deals with him, according to the statement.

In comments to reporters, Ceresney and Bharara both bristled at reporters’ suggestions that a celebrity had gained preferential treatment.