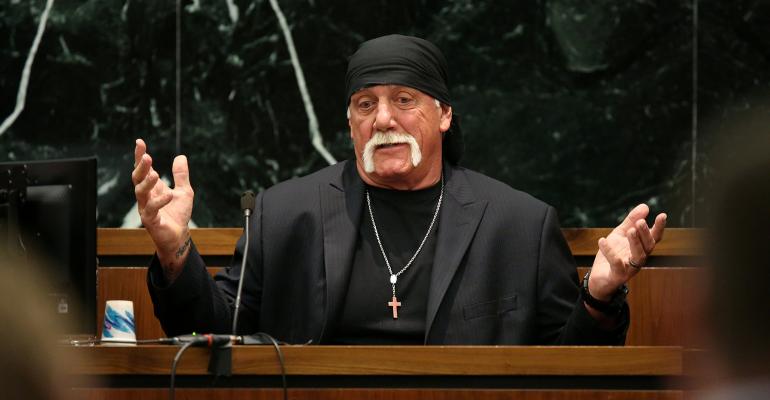 Hulk Hogan, Peter Thiel, and the Future of ‘Revenge’ Lawsuits

(Bloomberg) -- In the old days, lawyers spent their own money to sue in the hope of victory and a third of the client's award. Then came litigation finance, in which law firms with limited funds turn to investors, getting cash up front in exchange for a piece of the pie if the case is won.

Now comes Terry Bollea, better known as wrestling superstar Hulk Hogan, and his successful lawsuit against Gawker Media LLC. PayPal co-founder Peter Thiel helped bankroll Bollea's lawsuit against the online-media company, a person with knowledge of the matter told Bloomberg News. (Thiel's involvement was first reported on Tuesday by Forbes, and he did not immediately return a request for comment.)

Thiel, a venture capitalist, Facebook Inc. board member, and Silicon Valley billionaire, suffered mightily at the hands of Valleywag, a now-defunct Gawker publication that skewered prominent figures in the tech world. It's reasonable to assume he enjoyed a bit of schadenfreude when Bollea sued Nick Denton's company over the release of a sex tape depicting the wrestler with a friend's wife. But the issue of Thiel's financial support for the lawsuit, which resulted in a $140 million verdict to Bollea in a Florida court, now brings an already sensational case with free-speech implications into contact with the controversial litigation-finance industry.

Historically, giving a lawyer money to sue on someone else's behalf was considered illegal. Litigation financing, also known as "champerty," was originally considered a perversion of the legal system that would allow feudal lords to oppress the poor. In recent years, however, many American courts have loosened those restrictions and in turn created a billion-dollar industry. In one prominent lawsuit, an influential Delaware court held that communications between a legal team and such a benefactor are protected just like those between a lawyer and his client.

Companies that lend funds typically take a percentage of the money won, just as lawyers do. These fees can amount to 20 percent or more of a verdict or settlement. Litigation funding by investors is sometimes the only way a case can proceed. Another litigation finance method—borrowing from banks at high interest rates—has also become popular.

As it turns out, someone looking to finance a lawsuit out of vengeance may be on more solid legal ground than someone looking to profit, at least as far as champerty is concerned, said Stephen Gillers, a legal ethics expert at New York University. Champerty is largely seen as barring a profit motive rather than a vendetta.

But that's not the end of the matter. "Thiel may not be seeking a profit, so the other old concept that might apply to him is called maintenance, which forbids funding litigation without 'just cause or excuse,'" said Gillers. The doctrine holds that such lawsuits are to be discouraged: "Revenge would not be just cause or excuse under the maintenance doctrine," he said.

Most jurisdictions have done away with maintenance as a way to block lawsuits, Gillers said, and even if the concept were still in force, it would be next to impossible to figure out whether someone's motivation crossed the line. The person who gives a poor lawyer money to see that justice is done for a client, be it out of sympathy or because of his own prior experience, could arguably be seen as pursuing a just cause.

"Ethics rules recognize that there can be many legitimate reasons why one person may wish to pay the legal fees of another," Gillers said. Companies regularly pay the fees of an indicted executive, and it's not uncommon for parents to pay the legal fees of an adult child. But what if the benefactor wants the lawyer to pursue a strategy not necessarily in the best interest of the client?

"Ethics rules explicitly tell lawyers that their confidentiality and loyalty obligations run only to the client and that only the client can make decisions about the representation," Gillers said. "The funding industry is quite aware of this, and in my experience, it and the lawyers they fund are careful to comply with these rules."