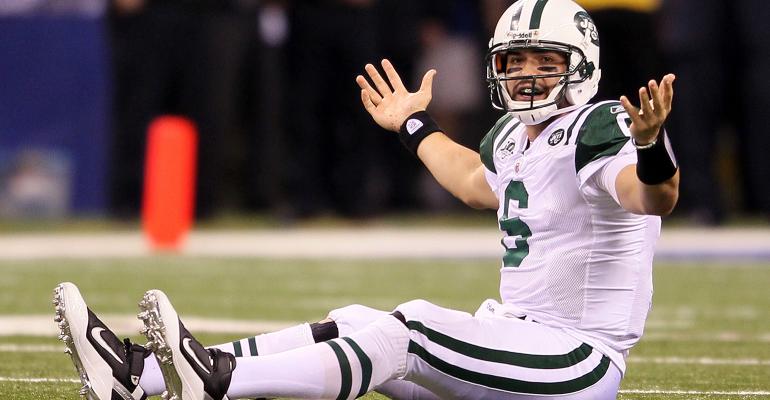 (Bloomberg) -- Former New York Jets quarterback Mark Sanchez and other professional athletes said they were cheated out of millions of dollars in a Ponzi-like scheme orchestrated by an investment adviser who appealed to their Christian faith.

Sanchez, and major league baseball pitchers Jake Peavy and Roy Oswalt were defrauded out of about $30 million, according to a recently unsealed U.S. Securities and Exchange Commission lawsuit in Dallas federal court. The athletes all used the same broker, Ash Narayan, formerly of RGT Capital Management. The adviser gained their trust through religion and their interest in charitable works, the SEC said.

Narayan concealed multiple conflicts of interest from investors, the SEC said in its lawsuit against him. He directed the athletes’ cash to The Ticket Reserve Inc., which allows fans to reserve face-value tickets to sporting events where the teams have yet to be determined, the SEC said. He was on the company’s board of directors, owned more than 3 million shares and was its primary fundraiser -- raising more than 90 percent of its investment capital, the agency said.

“Mr. Narayan has always sought to act in his clients’ best interests,” his lawyer, Howard Privette, said in an e-mail. “Accordingly, he will continue to work with the SEC to ensure that this matter is resolved in the most favorable manner for those clients.”

Nick Sanchez, Mark’s brother and attorney, didn’t have an immediate comment. Representatives for Peavy and Oswalt didn’t immediately respond to requests for comment.

All three athletes sought low-risk, conservative investment strategies, the SEC said. Narayan ignored their requests and instead invested in TTR even though the company was in financial distress. TTR’s chief executive officer wrote to Narayan in a May 2014 e-mail: “To be sure, our revenue sucks. Our balance sheet is a disaster.”

“Narayan exploited athletes and other clients who trusted him to manage their finances. He fraudulently funneled their savings into a money-losing business and his own pocket,” said Shamoil T. Shipchandler, head of the SEC’s Fort Worth office.

Sanchez, who’s set to be the starting quarterback for the Denver Broncos this year, met Narayan soon after entering the National Football League in 2009, he said in a court filing. The two attended the same church in California, and Sanchez said he believed the adviser was a devout Christian and highly qualified. The quarterback had his NFL paychecks deposited directly into a brokerage account.

In mid-2011, Sanchez agreed to make a $100,000 investment in TTR. Instead, Narayan forged documents and directed more than $7 million of Sanchez’s money to the ticket company, the SEC said. In total, Narayan transferred more than $33 million from all investors to TTR, earning almost $2 million in hidden compensation.

The vast majority of Peavy’s personal wealth -- about $15 million -- was invested in the ticket company without his authorization, he said. Mark Loretta, then a teammate of Peavy on the San Diego Padres, introduced him to Narayan around 2004 or 2005. Peavy, now on the the San Francisco Giants, said he trusted Narayan because he was a certified public accountant, which wasn’t true, and because he was very involved in charitable causes including churches overseas. Peavy said he last spoke with Narayan in March, and was promised he’d get all his money back. He said he’s yet to receive any of the funds used to invest in TTR.

Oswalt, who retired in 2014 after spending most of his career with the Houston Astros, met Narayan around 2002 or 2003. At one point, about 80 percent of Oswalt’s major league salary was directed to the investment account. Narayan invested at least $7 million of Oswalt’s money into TTR, without his authorization, according to the complaint.

RGT sued Narayan, TTR CEO Richard Harmon and other company officials in Chicago federal court in May, claiming they breached their fiduciary duties by mismanaging the company’s financial affairs and amassing excessive debt.

Harmon looks forward to continuing to cooperate with the SEC to resolve the matter as soon as possible, his lawyer, Lanny J. Davis, said Tuesday in an e-mailed statement.

“Neither Rick Harmon nor his chief operating officer, John Kaptrosky, did anything wrong while Mr. Harmon was CEO of The Ticket Reserve, and they and the company were in fact victims of someone else’s alleged wrongdoing,” Davis said.

TTR was cash-strapped for years and unable to generate sufficient revenue to cover its operating expenses, RGT said in the lawsuit. As a result, company officials routinely solicited new investor money to cover expenses, including making payments to earlier investors.

The company officials “solicited millions of dollars in loans to Ticket Reserve from investors, with no reasonable basis to believe that Ticket Reserve’s revenues would fund the repayment of those loans,” RGT said