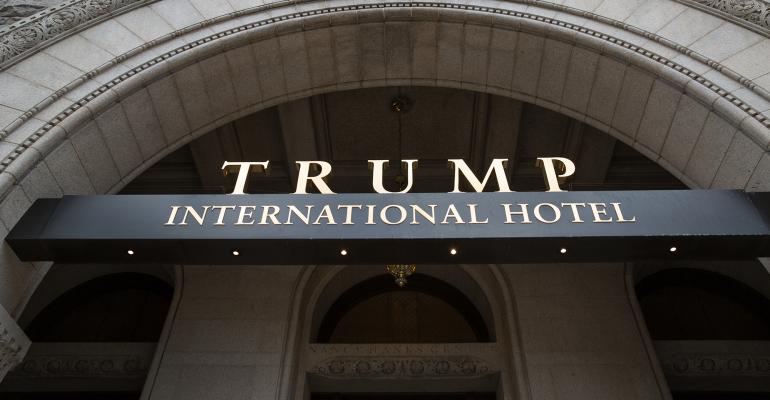 The extension means that the financial information tied to the D.C. hotel likely won’t get released before the election.

(Bloomberg)—A U.S. appeals court extended a temporary hold on subpoenas issued to the Trump Organization and other entities in a lawsuit accusing President Donald Trump of illegally profiting from his Washington hotel.

The extension by the federal appeals court in Washington on Thursday all but assures that a pair of Democratic attorneys general won’t get to see the financial information before the presidential election in November.

Trump had asked the court to continue blocking the discovery process from the AGs of Washington, D.C., and Maryland while he seeks to have the case tossed by the U.S. Supreme Court, which hasn’t yet agreed to hear his appeal.

Trump said in recent court filings that he’ll ask the nation’s highest court to reverse a May appellate ruling that revived the lawsuit accusing him of violating the Emoluments Clause of the Constitution by profiting from foreign governments whose employees stayed at the hotel, which Trump developed in a historic U.S. Post Office building not far from the White House.

“This means we will not get discovery before the election in all likelihood -- his delay tactics have succeeded,” Maryland Attorney General Brian Frosh said in a phone call. “We still intend to get to the truth, but he is likely to be able to keep hiding the information about the post office hotel until after the election.”

Frosh said the subpoenas seek financial information from the Trump Organization as well as competitors and government agencies that have done business with the property -- but nothing from Trump personally.

The subpoenas are “very discreet and organized in such a way that the president isn’t inconvenienced in any way,” Frosh said. “The fact that he is fighting this shows how scared he is for this information to come out.”

The two AGs claimed taxpayers they represent were being harmed because the Trump International Hotel has become a magnet for foreign dignitaries, state government officials and lobbyists, drawing business away from competitors in Maryland and D.C. They sought a court order compelling Trump to abide by constitutional restrictions.

In its request for a stay, the government said it was likely to succeed before the Supreme Court and shouldn’t be bothered with the subpoenas in the mean time.

“That intrusive and burdensome discovery into the President’s financial affairs and official actions, including subpoenas to five federal agencies, would require the government to expend substantial resources and impose irreparable harm on the President,” the Justice Department said in the filing.

To contact the reporter on this story: Erik Larson in New York at [email protected].