/sites/all/themes/penton_subtheme_wealthmanagement/images/logos/footer.png
Recent
Recent
Mindy Diamond on Independence: A Powerful Strategy to Accelerate Growth for Financial Advisors
Jun 24, 2021
How to Correct and Avoid the Excuse Trap
Jun 24, 2021
10 Must Reads for CRE Investors Today (June 24, 2021)
Jun 23, 2021
Within an Already Favored Sector, Industrial Big Boxes Are Highly Prized by All Types of Investors
Jun 23, 2021
Featured
Poll: 15 Classic Books on Investing and the Markets
Apr 03, 2020
Fifteen Must-Listen Business Podcasts for Advisors
Aug 14, 2020
25 U.S. Markets Adding the Most Multifamily Units This Year
Feb 03, 2021
The Top Colleges for Financial Planning
Oct 03, 2019
Coronavirus
brought to you by 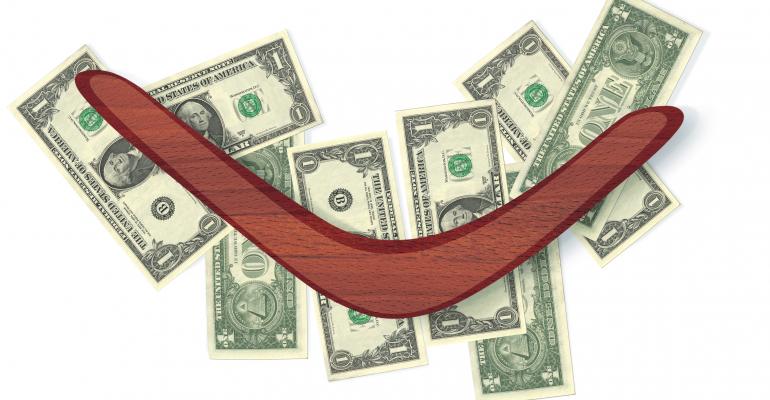 Texas hotelier Monty Bennett, whose companies own 130 properties across the country, said Saturday that he will return the loans provided under the Small Business Administration’s Paycheck Protection Program.

(Bloomberg) -- A major donor to President Donald Trump whose companies are among the biggest known recipients of rescue loans for small businesses hurt by the coronavirus outbreak said he will return the money.

Texas hotelier Monty Bennett, whose companies own 130 properties across the country, said Saturday that he will return the loans provided under the Small Business Administration’s Paycheck Protection Program, which is intended to help keep workers employed. Bennett said new restrictions meant those companies may no longer qualify.

“We are disappointed that, in an abundance of caution to avoid any risk of non-compliance with the changed PPP rules, our actions mean that our employees, vendors, communities and others in need will not benefit from the PPP as Congress intended,” he said in a statement.

The move follows criticism that public companies like Bennett’s were able to secure millions of dollars in funding from the program while some mom-and-pop businesses were left with nothing. On Friday, Senate Democratic leader Chuck Schumer called on the SBA to review the loans made to Bennett’s companies.

“This runs against the spirit of the law to provide much needed funds to truly small or family-owned businesses around the country that are in dire need of assistance,” the New York senator said.

Bennett is the chairman of three interrelated companies: Ashford Hospitality Trust Inc. and Braemar Hotels & Resorts Inc., which own the hotels, and Ashford Inc., which provides asset management and hotel management services in exchange for advisory fees. The three together disclosed receiving about $70 million in PPP loans, according to regulatory filings.

The companies were able to secure loans because of a loophole that allowed big restaurant chains and other large companies to rake in millions in low-interest loans. On Thursday, the Trump administration announced a new rule that single corporate groups shouldn’t get more than $20 million in total loans, which applies if businesses are “majority owned, directly or indirectly, by a common parent.”

As Congress was rushing to rescue small businesses in March, Ashford hired two Trump-linked lobbyists to advocate for a hotel-industry rescue, according to disclosures filed with Congress. One was Roy Bailey, the Republican fund-raiser in Texas who served as the 2016 co-chairman of the Trump campaign’s fund-raising arm and raised money for Trump’s preferred super-PAC. The other was Miller Strategies LLC, whose chief executive officer, Jeffrey Miller, is also bundler for his 2016 campaign.

Bennett is also a Trump donor. He gave $150,000 in the last six months to a fund-raising committee for the president’s reelection campaign and for Republicans, according to Federal Election Commission records, and donated more than $200,000 during the 2016 presidential campaign.

--With assistance from Ben Brody.

To contact the reporter on this story:
David McLaughlin in Washington at [email protected]

To contact the editors responsible for this story:
Sara Forden at [email protected]
Linus Chua