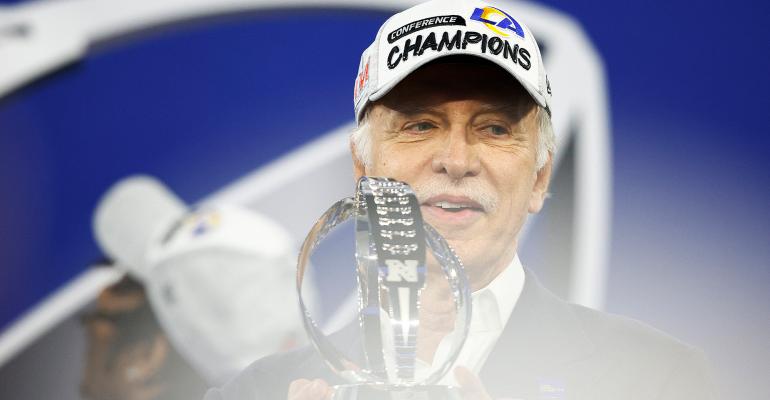 Sponsorships, ticket sales and Kroenke’s real estate are all poised to benefit.

“Whooose house?!” Kroenke bellowed as he accepted a trophy midfield before 70,000 fans in the $5.5 billion SoFi Stadium he built, allowing the crowd to deliver their regular cheer, “Rams house!”

Even before kickoff on Feb. 13, against the Cincinnati Bengals in Super Bowl LVI, Kroenke’s team and stadium stand to be big winners. Sponsorships, ticket sales and Kroenke’s real estate are all poised to benefit as the franchise’s winning record and a state-of-the-art venue feed off each other, according to sports-industry analysts.

“It validates the massive investment he’s made to move the Rams to LA and build the most magnificent stadium on the planet,” said Marc Ganis, co-founder of Sportscorp Ltd., a Chicago-based sport consultancy.

The NFL’s twin themes of big money and power also weave through Kroenke’s success. His $750 million purchase of the Rams in 2010 is now worth $4.68 billion, making it the league’s No. 3 franchise, according to Sportico. That’s a sizable chunk of a $12.5 billion fortune amassed through sports and real estate, according to the Bloomberg Billionaires Index, and doesn’t even include his marriage to Walmart Inc. heiress Ann Walton Kroenke. His Kroenke Sports & Entertainment also owns the Denver Nuggets basketball franchise, the Colorado Avalanche hockey team and the London-based Arsenal Football Club.

The Rams’ presence in Los Angeles also owes a lot to Kroenke’s clout -- and the NFL’s. In November, Kroenke and the league agreed to pay $790 million to compensate the city of St. Louis for the team’s relocation, avoiding a trial that threatened to bring confidential details of league finances into public view.

That episode reinforced the narrative of a league whose baronial owners answer only to themselves, a recurring flash point for fans -- and non-fans -- who want sports to model a better vision of American society. The run-up to the Super Bowl is unfolding amid the controversy over off-season firings that left only one Black head coach in a league in which about 70% of the players are Black, with one ousted coach, Brian Flores, suing the NFL for discrimination in its hiring practices.

Kroenke and the Rams declined to comment for this article.

Super Bowl victories -- or lack thereof -- usually have limited value for established teams. The Dallas Cowboys, worth $6.92 billion, making it the most-valuable NFL franchise, haven’t won the big game since 1995. But as a new team in a market where fans have numerous entertainment options -- there are the Dodgers, the Lakers, UCLA and USC basketball and football games, concerts, beaches -- the Rams need to prove themselves to be a hot ticket.

“A Super Bowl win would likely provide a boost to the franchise value of roughly 5% on top of the regular annual increase we’ve seen in recent years,” Kurt Badenhausen, a sports-valuation reporter at Sportico, said in an email. He estimated that the value of the Rams swelled 14% last year.

Unusual for a team owner, Kroenke built SoFi Stadium, also home to the NFL’s Chargers, without the use of government financing. He’s developing the surrounding area, the former Hollywood Park horse-racing track, into a mixed-use community of apartments, offices and stores that’s triple the size of Disneyland and the biggest real estate project in the western U.S.

It’s still a work in progress. The NFL occupies four floors of the project’s first office building, with three floors still available for lease, according to the development’s website. The site has entitlements for 500,000 square feet (46,000 square meters) of additional office space and a 300-room hotel. The 6,000-seat YouTube Theater, which shares a roof with SoFi Stadium, opened in August, and the first of as many as 2,500 residences will be completed this summer.

Kroenke’s project is a boon for Inglewood, the Los Angeles suburb that fell on hard times in the 1990s when the area was hurt by riots and the Lakers basketball team and Kings hockey franchise decamped for a new arena in downtown LA. A reminder of Inglewood’s checkered past came on Jan. 30, when a violent altercation in SoFi Stadium’s parking lot before the Rams-49ers game left a San Francisco fan in a medically induced coma.

Kroenke’s not the only one benefiting from the success of the Rams and their stadium. The NFL negotiates television deals, merchandising and licensing contracts, with proceeds divided evenly among the league’s 32 teams. Local revenue derived from ticket sales, concessions and corporate sponsorships, meanwhile, goes to the individual franchises.

The cheapest tickets to the Super Bowl were trading recently for more than $4,900 each on the StubHub website, while nearby parking spots were listed for north of $300.

“Related holdings, especially real estate and control over the stadium, go a long way toward building franchise value,” sports consultant David Carter said in an email. “It’s also critically important to assess not just fan interest, but corporate interest as well. A competitive team in a major media market that has been showcasing a new stadium is not lost on sponsors or other businesses hoping to use SoFi as a backdrop.”

The stadium will get a lot of free publicity on a TV broadcast that costs advertisers $6.5 million for a 30-second spot, according to Ganis of Sportscorp.

“They called him ‘Silent Stan’ in St. Louis,” he said of Kroenke. “But he’s also ‘Solid Stan,’ because he sees things through to the end. The world’s going to see that at SoFi Stadium.”

--With assistance from Scott Carpenter and Christopher Palmeri.