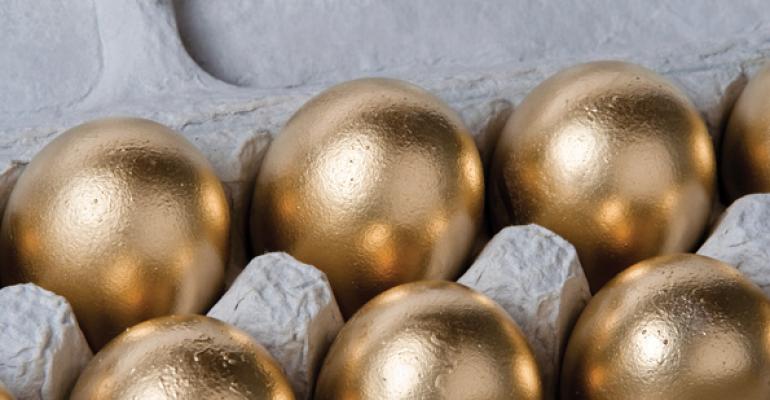 The 401(k) has long been considered a failure at truly preparing anyone for retirement – especially since the recession. Less noticed is that the plans are, slowly, getting much better.

Plenty of politicians and pundits have soured on 401(k) plans. Plan participants haven’t saved enough or invested properly, the critics say. The entire program should be changed or scrapped altogether. But the negative views are too bleak. After years of tinkering with the retirement plans, employers have finally developed a system that is beginning to work. The reforms are too late to rescue older workers who could face hard times. Still, the picture is bright for young people. Many employees under 40 are now building the kind of diversified portfolios that can support long retirements.

The reform efforts began a decade ago. At the time, many employers had come to realize that the plans had major flaws. First, the savings program was voluntary. Employees were free to save nothing—and many did. In addition, the 401(k) system assumed that millions of participants could make sophisticated investment decisions. That proved to be unrealistic. In the typical plan of the 1990s, employees were presented with half a dozen investment options. Companies held short meetings where representatives from fund companies talked about investing choices and passed out brochures. Faced with jargon about growth and value stocks, janitors and clerks were baffled. Even many employees with business degrees proved inept at managing portfolios. All too many participants put their savings in inappropriate choices, including money-market funds and the stock of employers. 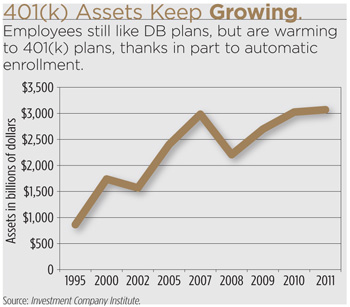 Recognizing that participants were making mistakes, plan sponsors began fiddling with the programs. The first efforts involved increased education in the form of more brochures and classes. But it soon became clear that education would not work.  Money management is difficult, and employees simply didn’t have the ability or motivation to master even basic principles. Persuading young workers to save anything proved challenging. As employers discovered, people in their 20s and 30s are focused on their careers and personal lives—not on saving for retirement.

Forced to rethink how the program worked, employers turned to researchers in behavioral finance. The researchers studied the problems and began designing systems that would offer better incentives and make decision-making easier. Armed with the new research, plan sponsors began a process of trial and error, experimenting with different investment choices and plan options.

Among the most successful innovations has been automatic enrollment. Under this approach, money is automatically deducted from paychecks and deposited in 401(k) accounts. Employees who do not want to save must take an action, filling out forms. This is very different from the traditional voluntary approach that was used in the past. Under the voluntary system, employees had to fill out forms in order to make contributions.

The new automatic scheme has produced dramatic results. According to a study by Vanguard Group, 72 percent of employees under 25 save when contributions are deducted automatically. At companies that do not offer automatic deductions, only 18 percent of young employees elect to save.

To improve investment decisions, researchers tried a variety of experiments, offering employees more or fewer choices. In the end, the most effective approach has been to encourage the use of a single diversified option, such as a target-date or balanced fund.  Because they include collections of stocks and bonds, the diversified funds provide convenient portfolios for employees who don’t know the first thing about investing.

Target-date funds have proved particularly effective. The target funds are designed for employees who will retire in a certain year such as 2020. The funds start with heavy stock allocations and gradually shift to bonds as the retirement date nears. The approach has spread rapidly, according to the Employee Benefit Research Institute. In 2010, 47 percent of recently hired employees used target funds, up from 28 percent in 2006.  Relying on the target portfolios, more young people are holding big stock allocations, an appropriate choice. According to Vanguard, participants in their early 20s had 41 percent of their assets in stocks in 2003. By 2010, the stock allocation had increased to 85 percent as the use of target and balanced funds spread. As the target funds have become more popular, many companies have adopted them as default options in automatic plans. In a typical arrangement, an employee who does nothing will have some pay automatically deferred and put into a target date fund.

Along with target-date funds, some employers have also begun offering investment advice online or over the phone. The approaches appear to boost returns, according to a study by benefits consultant Aon Hewitt. The consultant looked at the returns achieved by 400,000 employees from 2006 through 2010. On average, participants who used target funds or some kind of help achieved returns that were about 3 percentage points higher than the accounts of employees who had no help. The researchers found that many do-it-yourselfers took too much risk or not enough.

The reformers have yet to solve a crucial weakness of 401(k) plans: finding a convenient way for retirees to take sensible withdrawals. In the current system, most employees must figure out distributions on their own. All too many retirees spend their money too quickly. In some cases, nervous savers tighten their belts needlessly and refuse to tap their nest eggs at all. To assist participants, a few employers have begun offering counseling that is available for free over the phone. The advisors suggest that retirees buy annuities or develop systematic withdrawal programs.

Despite all the improvements to 401(k) plans, some employees remain dissatisfied with the programs. Surveys show that participants would like to see a return to traditional defined-benefit pension plans. With traditional pensions, employees received guaranteed monthly income and did not have to worry about investing strategy. But companies have dumped traditional plans because they are expensive, and 401(k)s cannot provide the guarantees that employees want. Still, the latest 401(k)s can be seen as jerry-rigged vehicles that can offer many of the features of pensions. Under the reformed schemes, employees who save sizable amounts can build sound nest eggs and receive reliable retirement income.