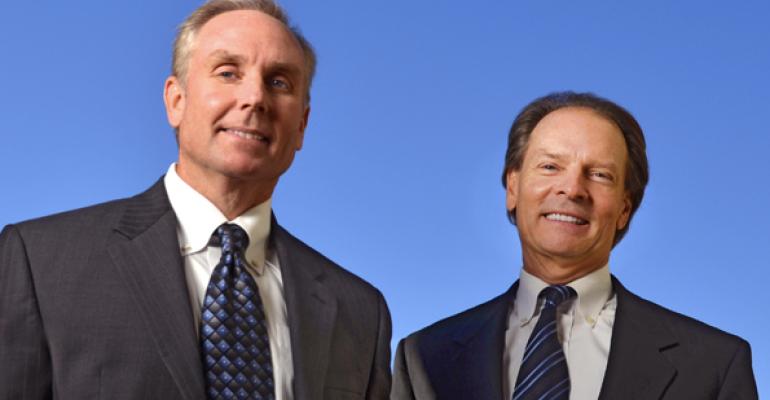 Greg Friedman, owner of Friedman & Associates, and Richard Stone, founder of Salient Wealth Management, met some years ago at a Schwab IMPACT conference. Turns out their financial advisory offices were within 10 miles of each other.

A few years later, Stone says he came to a crossroads. His firm, Salient had hit a wall. The practice had met growth targets, but Stone says, to remain on the growth path he had to master technology and create a deeper bench of employees. “If I would have lost one or two people, we would have been in trouble,” Stone says.

Friedman, Stone says, was also at a crossroads. Friedman excelled at using technology. “His firm didn’t have the management depth we had and he was outsourcing his investment strategy,” two things that Salient was strong in. “Both of us had what the other one wanted.”

“I remembered from meeting him that Greg was strong in technology and that we were using his CRM software, Junxure,” says Stone. He remembered that Friedman had won a prestigious IMPACT award
for technology.

“I called him and we met for lunch.”

In 2009, the two companies, two of the oldest Bay Area financial advisory firms, joined forces to form Private Ocean. The combined firm has about $750 million in AUM and the firm has 26 employees, including 10 FAs, who truly do work as a team (i.e. not in “silos,” where each has his own book of business and merely share back-office and relationship personnel). The clients are clients of the firm, and not of the FAs. Clients are assigned two FAs and one client service rep. Five of the employees are in client administration and most of the others do research and investment strategy work. The employees are paid a salary and receive performance bonuses. For example, if an FA brings in new business, he will get a bonus—but he may not even end up working on the account. Private Ocean works with senior executives, business owners and other affluent individuals with a minimum of $2 million to invest. It is a fee-only RIA which also charges clients another fee for the first financial plan.

Investment strategy is led by Frank Jones, who had once run $30 billion for a Wall Street firm. Investments are largely centered around ETFs and some mutual funds; alternative investments (managed futures, liquid hedge funds, private equity and real estate, etc.) are used for risk management, to dampen risk. Individual securities are chosen for tax planning reasons.

What’s interesting about the merger is its evolution. Because both men were proud of their corporate cultures, they began to exchange employees: Some Salient personnel would work out of Friedman’s office, and vice versa. This began about a year before the deal closed. As the merger got closer, Stone says they realized they had a good fit.

Just one problem. The combined firm “built out too quickly,” Stone says. Private Ocean went up from 21 staffers to 27. “We wanted to be ready, but the recession lasted longer than we thought,” Stone says. Profit margins dropped, although the firm continued to be profitable