/sites/all/themes/penton_subtheme_wealthmanagement/images/logos/footer.png
Recent
Recent
Zombies Defy Bankruptcy Logic Amid Meme-Driven Rally
Jun 14, 2021
10 Must Reads for the CRE Industry Today (June 15, 2021)
Jun 14, 2021
Investors Explore UPREITs as Alternative to 1031s
Jun 14, 2021
When is a Leasehold Investment Right for you?
Jun 14, 2021
Featured
Poll: 15 Classic Books on Investing and the Markets
Apr 03, 2020
Fifteen Must-Listen Business Podcasts for Advisors
Aug 14, 2020
25 U.S. Markets Adding the Most Multifamily Units This Year
Feb 03, 2021
The Top Colleges for Financial Planning
Oct 03, 2019
Coronavirus
brought to you by 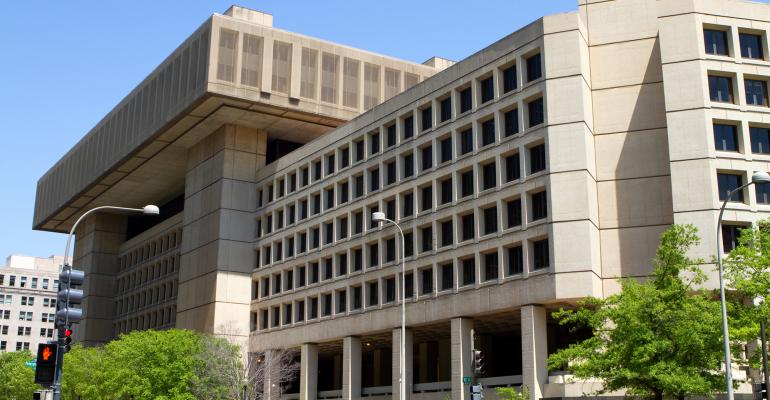 (Bloomberg)—The coronavirus relief package drawn up by Senate Republicans and the White House includes $1.75 billion for a new FBI headquarters in Washington, a priority for President Donald Trump, who wants to prevent the facility from being moved to the suburbs.

Plans to move the FBI from its current location about four blocks from the White House had been in the works since about 2012, but were scuttled after Trump took office.

The president told reporters last week that other potential sites in nearby Maryland and Virginia were not preferable because “you have to be near the Justice Department” and “there’s nothing better than the site.”

But Representative Gerry Connolly of Virginia and other Democrats have accused Trump of trying to keep the bureau’s headquarters at its current site because it occupies a significant chunk of real estate near the Trump International Hotel, and keeping it there would prevent other commercial development in the spot.

Senate Majority Leader Mitch McConnell, asked about the provision at a news conference Monday, appeared to express surprise it was in the package. He declined to defend the inclusion of something clearly unrelated to the pandemic in what he touted as a tailored and targeted bill.

“You’ll have to ask them why they insisted that be included,” McConnell said of the Trump administration.

Connolly, for his part, criticized the move, while associating McConnell with the measure.

“More than 150,000 Americans have died from coronavirus, millions are unemployed, state and local governments are struggling to stay afloat, and Mitch McConnell and Donald Trump are more concerned about protecting Trump Hotel. That is shameful,” Connolly said in a statement on Monday.

The amount set aside in the Republican plan unveiled Monday is described as “for the design and construction of a Washington, D.C. headquarters facility for the Federal Bureau of Investigation.”

A Democratic-commissioned General Services Administration inspector general’s report released in August 2018 found the president had been more involved in the issue of locating a new FBI headquarters building than administration officials were letting on in their sworn testimony to Congress.

--With assistance from Steven T. Dennis.

To contact the reporter on this story: Billy House in Washington at [email protected].

To contact the editors responsible for this story: Kevin Whitelaw at [email protected]