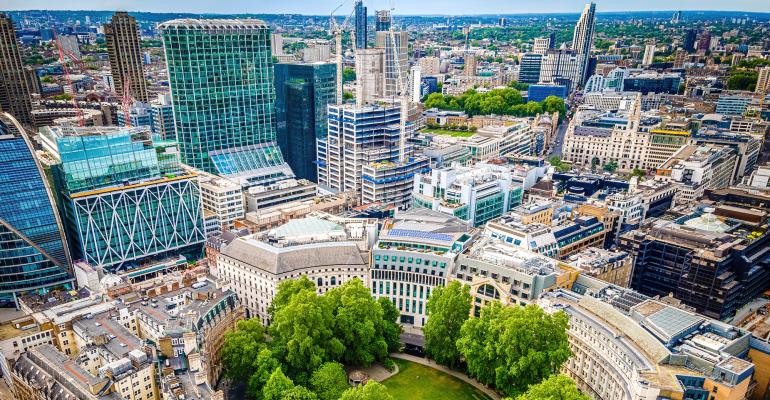 European real estate companies have around €80 billion worth of bonds coming due in the next three years.

The invasion caused energy and food prices to skyrocket, prompting central banks to unleash their most aggressive round of monetary tightening this century and threatening the foundations of Europe’s decade-long real estate boom. With a funding gap looming, landlords could turn into distressed sellers.

Public markets have been sounding the alarm on property for months, with the Stoxx 600 Real Estate Index plunging over 40% this year and touching valuations that haven’t seen since the global financial crisis. But with much of real estate trading hands privately, the true impact of the end of the cheap-money era has been slow to emerge, until now.

Land Securities Group Plc, the developer of the 16-story building that will house Deutsche Bank’s London staff from early next year, finally sealed the sale last month, accepting a price about 15% lower than initial offers made just before Russia attacked Ukraine.

The deal marks a rare signpost of the pain facing Europe’s once-hot property markets and stands out because many sellers aren’t even testing the market.

Planned sales of trophy buildings like Bank of America’s London headquarters next to St Paul’s Cathedral have been canceled, meaning there’s few deals on which to judge the new realities. Overall, about £6 billion of London office stock was withdrawn from sale, broker CBRE Group Inc. estimates.

“Currently we have the dance-floor situation, with buyers and sellers on either side and no one wants to get in the middle and dance,” Ian Rickwood, founder of real estate private equity firm Henley Investment Management said. 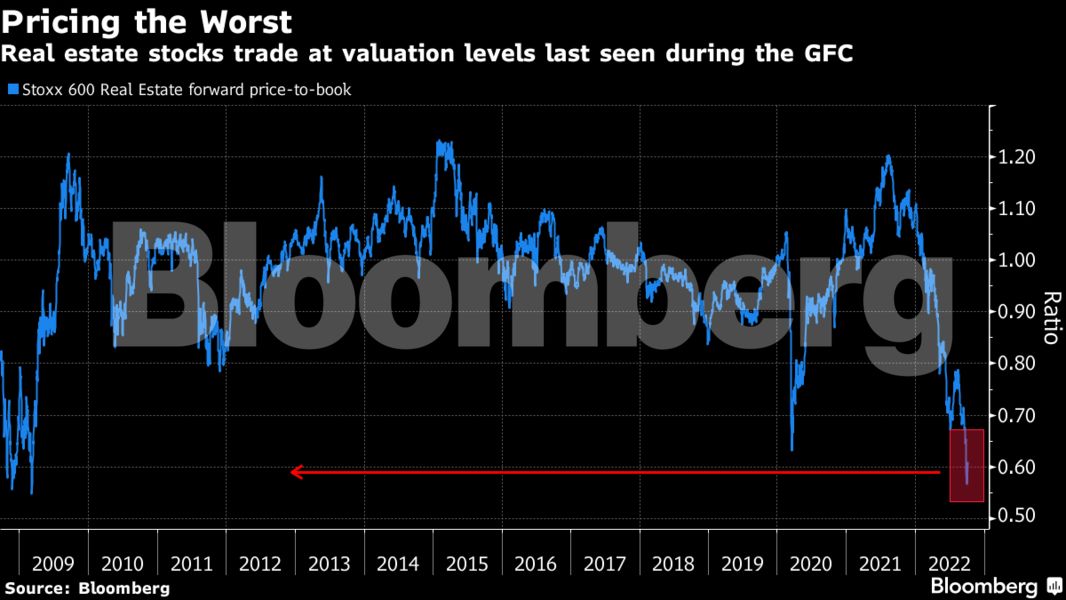 That could soon change as companies seeking to refinance find borrowing costs have skyrocketed. For some, debt markets are effectively closed, and there might not be enough money available to repay all the loans coming due.

Hans Vrensen, head of research and strategy at AEW Capital Management LP, calculates a potential refinancing gap of €24 billion ($23.5 billion) over the next three years on borrowings secured against UK, German and French real estate.

“All this will inevitably lead to forced sales amongst commercial and residential property owners,” said Nicole Lux, senior research felllow at Bayes Business School who compiles a bi-annual report on British real estate lending. The shift “will play strongly into the hands of capital-rich investors who can pick up a bargain.” 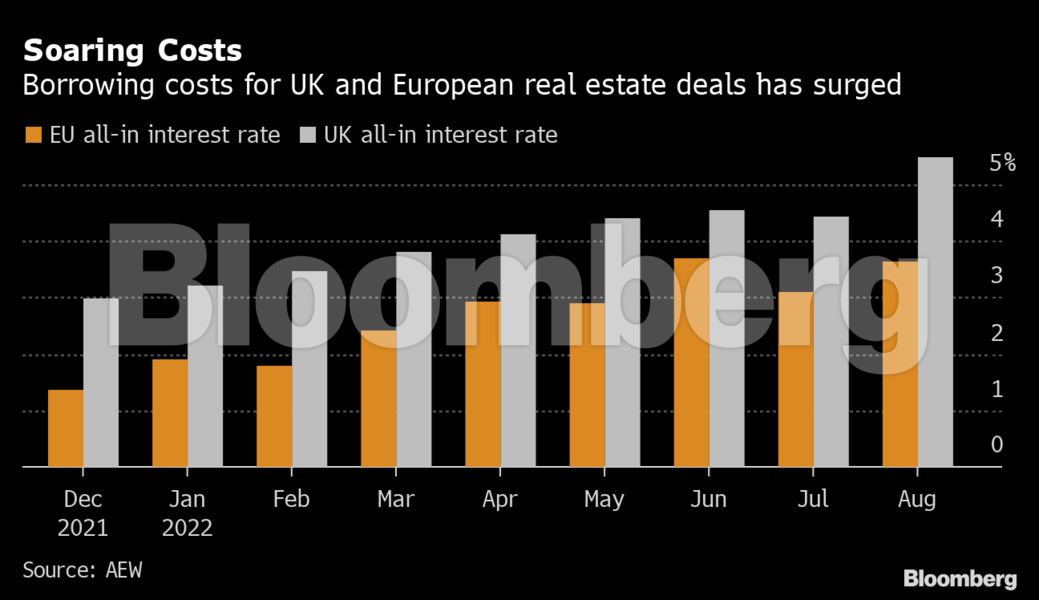 Vonovia SE appears to be kicking off the trend. Europe’s biggest public landlord plans to sell more than €13 billion of assets to bring down debt after the cost of borrowing exploded and its share price collapsed.

Other property companies that loaded up on cheap credit -- including Aroundtown SA, Adler Group SA and Sweden’s SBB -- are also looking to shed assets before loans mature.

During years of negative interest rates, buyers were willing to accept minimal returns on their investments. But interest rates are rising, and even rock-solid German 10-year bund yields have climbed by about 2.3 percentage points this year.

That pressure is filtering through property markets. The London Deutsche Bank deal suggests prime London office yields have moved to about 4.7% from 4%, according to Bloomberg Intelligence analyst Sue Munden. UBS Group AG’s London headquarters, 5 Broadgate, had a 3.6% yield when it sold last December.

The situation in continental Europe will be far worse as yields there continued to compress over the past five years, while Brexit kept London prices largely in check. 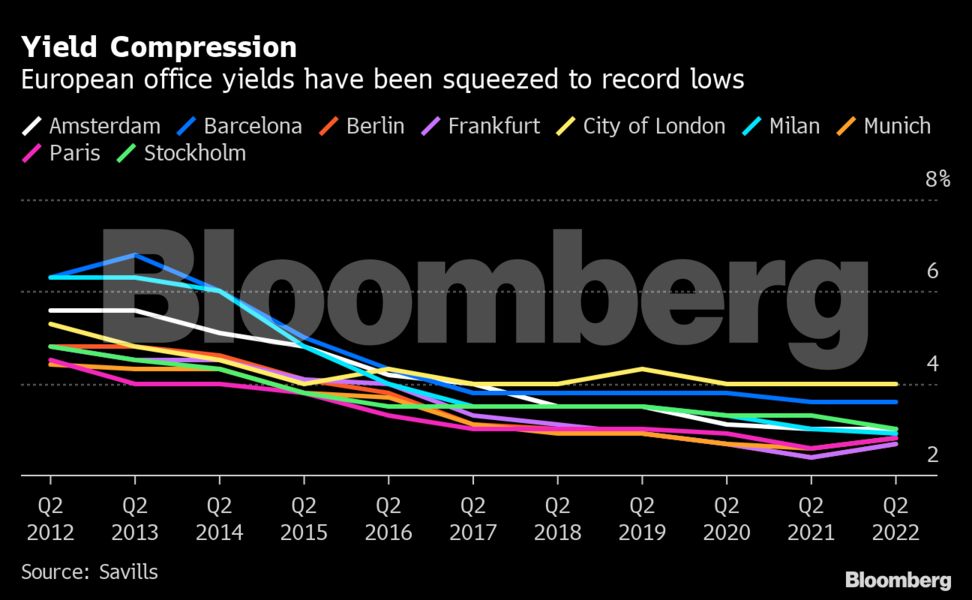 That’s worrying for property companies, because even small changes have an out-sized impact on valuations when yields are so low. For instance, a building with $10 million in rental income would be worth $100 million less if the yield shifts to 2.5% from 2%, a much larger impact than when yields are closer to historic norms. That means balance sheets risk getting wobbly if assets get marked down.

So far landlords insist valuations are holding up, with Vonovia recently reassuring investors that book values for the third quarter will likely be stable or up. The optimism suggests that appraisers are “even more behind the curve than we thought possible,” real estate research firm Green Street said in a note.

Rent increases could be a way to prop up valuations, but with painful recessions looming across the region and costs soaring, businesses and consumers are already strapped. In Germany, more than 10% of households were already overburdened by housing expenses last year, which was before inflation really took off. 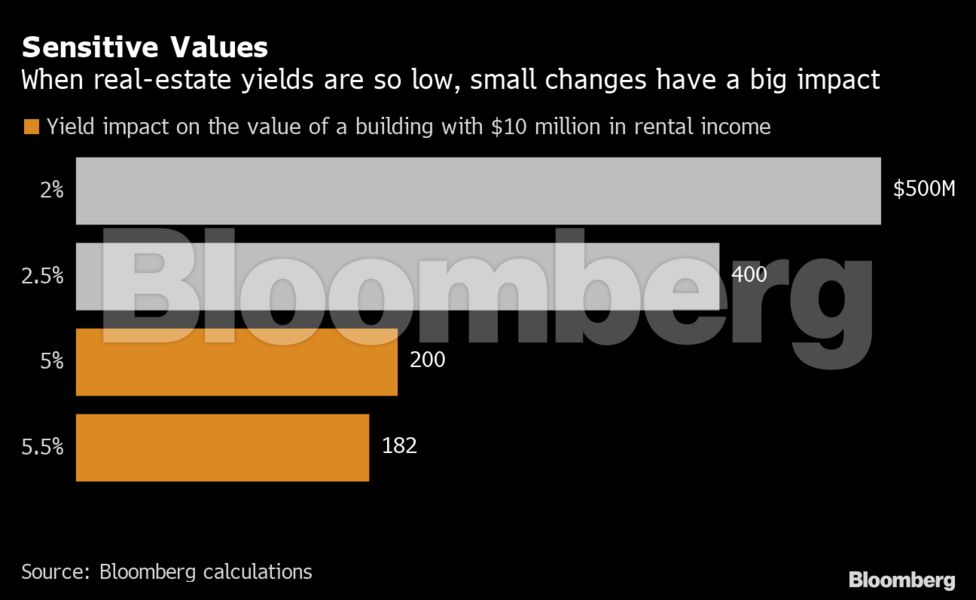 To be sure, property fundamentals still look solid. Demand for new space is strong, vacancies are mostly low and inflation is likely to keep a lid on new supply by deterring construction. Savills Plc estimates that more than 40% of London office projects that were due to be built by 2026 are delayed -- some by more than a year.

And except for some outliers, debt levels at property companies are modest compared with the pre-financial crisis excess.

“Historically, downturns in the real estate market have been driven by one of two things: too much debt in the system or too many cranes,” said James Seppala, head of real estate in Europe at private equity giant Blackstone Inc. “We have neither today.”

That upbeat view hasn’t stopped the real estate rout. Share prices have fallen so much that it implies the value of the portfolios of the continent’s largest landlords are set to fall by more than 39%, according to calculations by Bloomberg Intelligence.

If public markets are right, a crash of that magnitude would trigger a wave of foreclosures on a scale not seen since the global financial crisis.

“I would trust the signal from the capital markets in terms of where we are going, more than I would the data on rents, occupancy and take-up,” said Peter Papadakos, head of European research at Green Street. 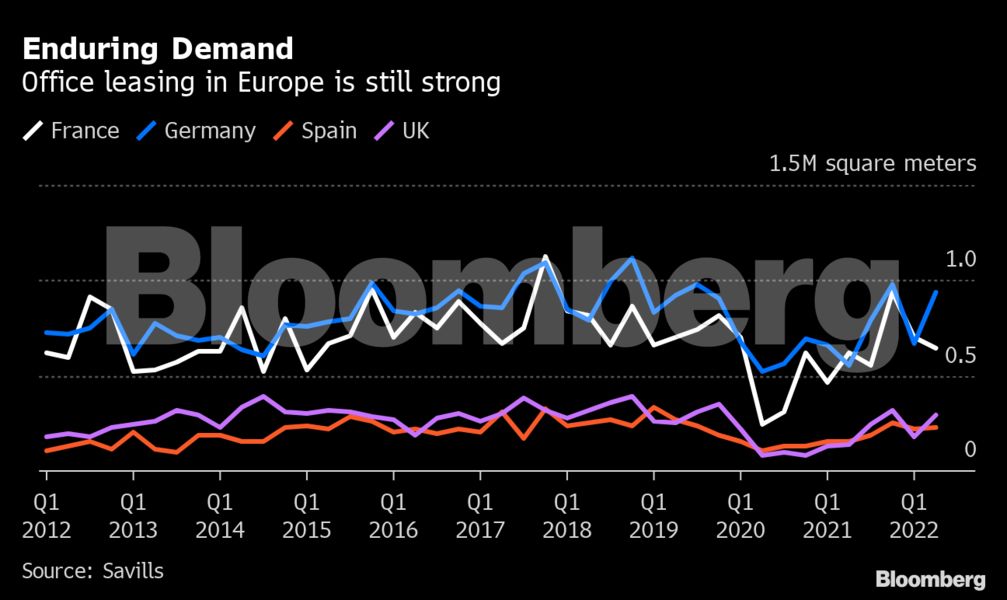 The structure of Europe’s real estate debt markets has also shifted markedly over the past 10 years, posing new headaches compared to the last crash. The European Central Bank’s asset-purchasing program helped make it more attractive for landlords to sell bonds instead of using secured mortgage loans to finance their properties.

Real estate companies have around €80 billion worth of bonds coming due in the next three years, according to data compiled by Bloomberg. The securities have sold off sharply this year as investors fret about rising funding costs, meaning new issuance has all but dried up.

With bond markets no longer easily accessible, property companies need alternative sources of financing, but banks are likely to be wary after spending a decade reducing their exposure after the last crash.

“I suspect the last thing the banks want is to take all that back on the balance sheet,” said Mike Sales, chief executive officer of Nuveen Real Assets. “There isn’t too much leverage yet, but that can quickly move up if yields move out.”

Even if banks extend more financing, it won’t come cheap. As of the end of June, the combination of higher interest rates from central banks and rising costs to hedge real estate loans had driven all-in costs for borrowers in the UK, Germany and France to double their level nine months earlier, according to a report by AEW. The volatility unleashed by the UK’s recent tax cuts has seen them spike even higher.

Even if landlords are holding firm for now, the financing pressure risks eventually pushing more companies to use property sales to drum up cash and then a trickle becomes a flood.

That could make the deal for the Deutsche Bank building -- which sold for about £140 million below original bids -- look good.

“The challenge right now is that you have so many different challenges,” from inflation and interest rates to foreign-exchange volatility and political extremism, Henning Koch, CEO of Commerz Real AG, said in an interview on Tuesday at the Expo Real conference in Munich. “That makes it really difficult to drive your company in the right direction.”

--With assistance from Laura Benitez, Damian Shepherd and Michael Msika.