brought to you by
Investment

The stampede from U.S. equity mutual funds and the accompanying positive S&P 500 performance over the last few years is eerily similar to the late 1970s’ bull market, a new report by The Leuthold Group says. And if history is any indication, the recent inflows into these funds this year could be followed by a large market decline. According to Leuthold, after a 50 percent market decline into the September 1974 low, the S&P rose 121 percent to a November 1980 cyclical high. Only 15 of those 74 months saw positive inflows into domestic equity funds. But after investors poured $500 million (a lot at that time) into these funds in November 1980, the S&P took a 27 percent dive. After a 57 percent decline into the March 2009 low, the S&P gained 121 percent, while investors yanked money out of equity mutual funds for 38 months out of 47. But in January 2013, investors poured $22 billion into these funds, the first month of inflows since April 2011. Sound familiar? “While thoughts of hundreds of billions switching from bonds to stocks in a ‘Great Rotation’ makes for great sell-side storytelling, history doesn’t support the public’s ability to pull it off,” says Doug Ramsey, chief investment officer of The Leuthold Group. 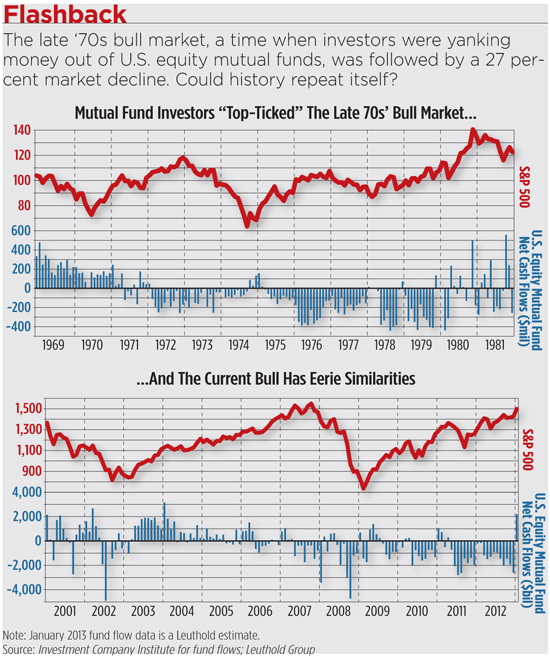