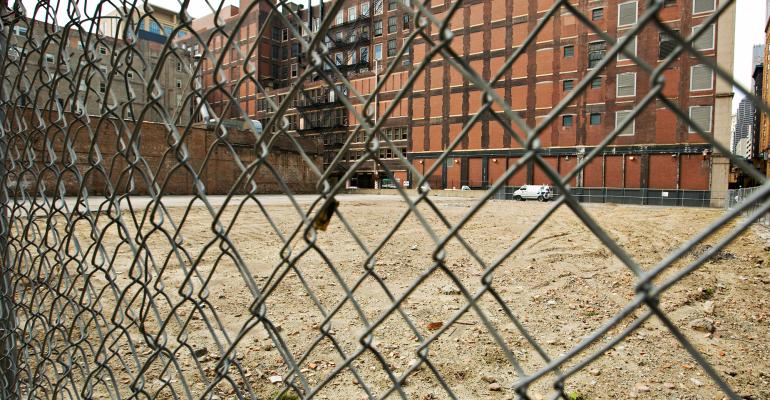 The city of Chicago owns some 10,000 vacant lots, with a large concentration in economically-challenged neighborhoods that have experienced decades of underinvestment. Selling them could help reduce overall crime. It could also boost affordable housing development.

(Bloomberg)—Chicago is seeking to streamline sales of thousands of vacant lots owned by the city in an effort to fight crime, increase the number of affordable homes and revitalize neglected neighborhoods.

The Windy City, which has been trying to address its empty lot problem for nearly a decade, identified 4,000 spaces that are clean and ready for sale, said Maurice D. Cox, commissioner for the Department of Planning and Development. Turning lots into housing and community spaces like gardens, playgrounds and shopping centers is part of Mayor Lori Lightfoot’s strategy to boost investments in the city’s south and west sides.

The city of Chicago owns some 10,000 vacant lots, with a large concentration in economically-challenged neighborhoods that have experienced decades of underinvestment. Selling them could help reduce overall crime, which surged 38% this year despite a drop in murders, police statistics show. It could also boost affordable housing development.

“We are now in the process of prioritizing which lots aldermen would like to market first,” Cox said Friday during a budget presentation. “That is going to be the cornerstone of a new initiative that will bundle properties together with specific housing goals.”

There’s good evidence that green spaces can deter violence, according to the University of Michigan School of Public Health. The university last year received a $2.2 million grant for a three-year study of 300 vacant lots in Detroit, where the land bank authority has been selling empty space since 2014.

Efforts to restore vacant lots in Philadelphia reduced gun violence by 29%, burglaries by 22%, and nuisance crimes like vandalism and noise complaints by 30%, according to a study of 541 lots by researchers at Columbia University that Chicago officials have referenced when presenting their plan.

Chicago first sold empty land to residents, block clubs and nonprofits for just $1 in 2014, with the so-called Large Lots program having offloaded than 1,400 plots since its inception. But many previous sales stalled because the city needed to conduct environmental reviews and lacked a comprehensive database for appraised values.

Now, the city has allocated $87 million in federal and bond funding to vacant lot revitalization under the Chicago Recovery Plan, allowing it to undertake a comprehensive survey of all empty plots. The department of planning and development is using $5 million of that fund to develop marketing strategies in collaboration with local real estate brokers, Cox said.

Chicago plans to offer side lots to adjacent owners for 10% of their value, according to Peter Strazzabosco, deputy commissioner for the Department of Planning and Development. Others will be sold at market prices, but could go for lower rates depending on the planned project. The first batch of roughly 2,000 lots will become available in mid-November.

Most of the land will be sold for residential construction, but applications are also open for commercial projects or open spaces, he said. The streamlined process is expected to cut sales time in half to about six months.

Chicago’s vacant lots are concentrated in areas that are primarily Black and Latino. In many of those neighborhoods, empty spaces continue to appear following demolitions of 2-to-4 unit residential buildings – a key component of the city’s private affordable housing stock, which is particularly important for Black renters, according to DePaul University’s Institute of Housing Studies.

The city’s privately-owned lots are almost universally better-maintained than their city-held counterparts, according to a study of the Large Lots program published last year in the Journal of the American Planning Association.

Chicago can “begin finally to do the in-fill development that many of these communities have waited for for many, many years,” Cox said.