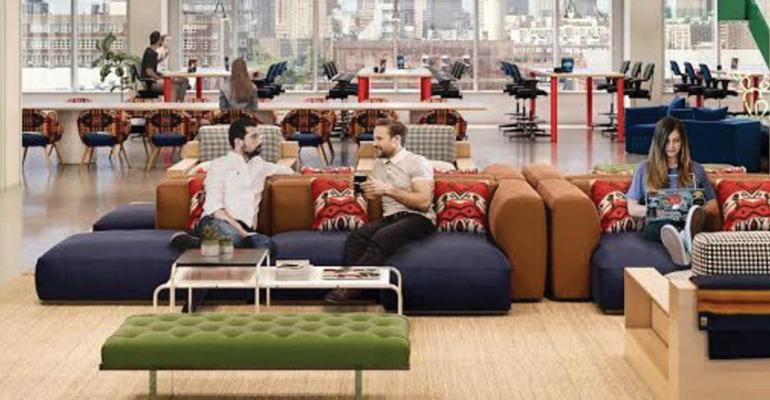 What to Think About WeWork’s Valuation?

As the company and its co-founder ready for a planned IPO, many market observers feel uneasy.

Co-working provider WeWork keeps making the news lately, first with the announcement of its planned IPO, then with the breakdown of how it plans to raise investor confidence in said IPO (through raising between $3 billion and $4 billion in debt), and now with the revelation that co-founder Adam Neumann has sold off approximately $700 million in equity in the company.

All of these moves are starting to make a number of people in the industry nervous, particularly as they come at the tail end of an already very long real estate expansion cycle.

To begin with, the company’s valuation of $47 billion, which makes it ‘the country’s most valuable start-up, according to the Wall Street Journal, has raised eyebrows. After all, WeWork keeps reporting massive losses and recent IPOs by other sharing economy start-ups haven’t raised nearly as much money as expected.

“Aside from the robust spending, WeWork has other qualities that analysts and real-estate investors find concerning. The company has only existed during a bull market, and its core business model involves signing long-term leases and then subleasing them shorter term—a risk in a recession when office rents tend to fall sharply,” the Wall Street Journal writes.

Meanwhile, Yale Insights notes that Neumann’s decision to shed so much of his ownership stake ahead of the IPO indicates “lack of faith in his own company.” Neuman also plans to sell ownership stakes in office properties that are leased back to WeWork in order to avoid a conflict of interest as the IPO draws near.

Plus, the media outlet questions what is unique about WeWork: “Neumann is hardly Mark Zuckerberg or Elon Musk, who, despite their own larger-than-life personas, do at least have unique, disruptive technologies. Strip away the barn-wood interiors, bean bags, and espresso bars, and Neumann’s empire looks a lot like…a lot of other real estate companies.”

But it is perhaps the narrative of WeWork’s ascent, built in large part on what Bloomberg writer Brad Stone calls “economic optimism” that is the greatest source of unease for seasoned pros. Stone links WeWork’s outsized valuation to the sort of wishful thinking displayed by bankers prior to the subprime mortgage crisis.

“While [Neumann] remains WeWork’s most powerful shareholder thanks to super-voting stock, you can probably see why it all draws comparisons to past financial calamities. At its heart, WeWork—sorry, the We Company—is a collection of properties around the world, bundled together by a cultish operating philosophy, whose real-world peers are traditionally assessed in a much more sobering way than whatever logic has propelled investors to peg WeWork’s valuation at $47 billion,” Stone writes.

So, what do commercial real estate pros on the ground think about WeWork’s IPO ambitions and valuation?

“It’s reflective of an economic environment that has an appetite for growing concepts,” says Al Pontius, senior vice president and national director of specialty divisions with brokerage firm Marcus & Millichap. “Certainly, WeWork has proven to be a growing concept, there is an expanding base of prospects, of tenants, companies, that are looking for more flexible turn key solutions, and WeWork is a provider of that.”

The company’s expansion on the global stage, and the underwriting on its office space deals, reduces the risks it faces in case of an office market downturn, industry insiders say.

Domestically, WeWork inked a deal for 89,300 sq. ft. in June in Miami at Southeast Financial Center, the tallest office tower in Florida, as well as a full-building lease in Boston’s Downtown Crossing. Internationally, WeWork is reportedly considering a deal to take control of its India affiliate. Bloomberg reports the deal would be worth around $1.9 billion in part cash and part stock, and could close as early as August.

Along with its co-working operations, WeWork launched a real estate investment platform in May, called ARK, to buy and develop commercial properties around the world. (WeWork has also invested in a number of companies that have more relation to Neumann’s personal interests than to its core business, according to the Wall Street Journal. Among these are: an elementary school, a company that makes wave pools and a natural foods business started by a pro surfer.)

“The company has diversified its geographic presence quite expansively over time. So, it’s probably less susceptible to a localized downturn than it was previously,” says Kevin McNeil, primary analyst with Fitch Ratings. “Then, given how it underwrites its buildings to break even at occupancy approaching 60 percent or maybe even lower, it does have a sizeable cushion in its open locations to sustain a downturn in a given market.”

WeWork reported that its portfolio occupancy fell to 80 percent from 84 percent at the end of last year because of its expansion, as new offices usually take up to 18 months to fill. WeWork locations open for more than 18 months can achieve an occupancy rate of between 90 and 95 percent, according to McNeil.

Still, due to its rapid expansion, the company reported a $1.93 billion loss on $1.82 billion in revenue in fiscal year 2018 and a $264 million loss in the first three months of this year.

“I think to be more precise, they are investing heavily for future growth. I think that they’ve substantiated their model, there’s clear demand for their offering, they’re a market leader, so, I think it would make sense to invest quite heavily in growth,” says McNeil. “I don’t want to say [the loss] is not concerning, I just want to make sure we’re clear what the loss represents, which is investment growth.”

However, WeWork is facing growing competition in European markets. The number of co-working offices across Europe has grown by more than 200 percent in the past five years, according to Bloomberg. Savills, a global real estate services provider, launched PIVOT in June, a flex office service offered exclusively in the U.K. The amount of co-working space in London has now surpassed 10.7 million sq. ft., tying with New York City for the largest co-working market in the world, according to Cushman & Wakefield data.

At the same time, several European banks and investors who have financed WeWork-leased buildings are becoming cautious about continuing to do so in the future. The company disclosed 46 percent of its revenue in the first quarter had come from its international locations.

However, WeWork’s critics say a weak economy will likely reduce the company’s client base and leave WeWork with no source of revenue to cover its own leases. At the same time, some experts argue that in an economic downturn, large corporations with space needs or pending lease expirations may shy away from penning long-term leases and instead leverage co-working space for short-term flexibility.

Of the 85 CMBS loans backed by Midtown Manhattan office properties identified in a Kroll Bond Rating Agency report, the principal balance exposure to WeWork totals less than 5.0 percent. However, if WeWork, were to come under financial stress and default on its lease obligations, its impact on those loans would still be felt, according to the report.

Nevertheless, according to McNeil, “I am sure that public market equity investors will expect WeWork to continue to grow. Over time, the company should obtain scale such that WeWork realizes significant operating leverage and ultimately operates profitably.”