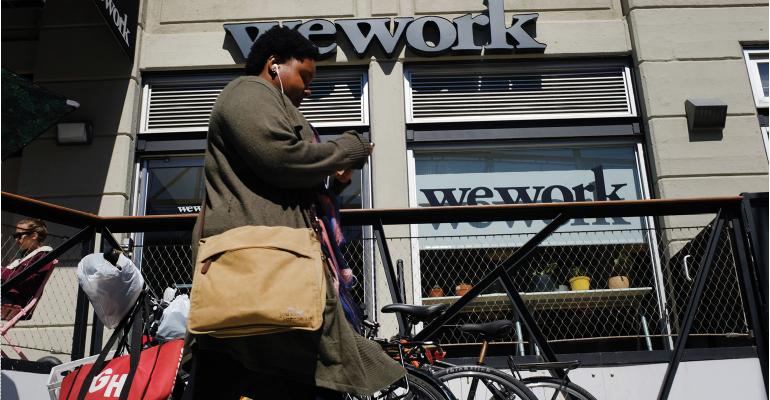 The company is now seeking a valuation closer to $20 billion, well below the $47 billion projected earlier this year.

(Bloomberg)—WeWork’s initial public offering won’t be quite the celebration the office-rental unicorn once foresaw.

The New York-based startup is considering seeking a valuation of about $20 billion to $30 billion in the IPO, people with knowledge of the matter said. The range could end up closer to $20 billion, said one of the people, which would be less than half the valuation it secured from its biggest backer just a few months ago.

The outlook for the public debut of WeWork, which has racked up billions of dollars in losses in recent years as the company funds grand ambitions, is cooling after the disappointments of other major IPOs this year such as Lyft Inc. and Uber Technologies Inc. That could put pressure on WeWork, which has a mammoth credit line tied to the success of the IPO, as well as SoftBank Group Corp., which invested at a $47 billion valuation earlier this year.

“They would probably price this thing at the more conservative end, maybe in the $20 billion range, given that the company is trying to raise more money,” said Phil Haslett, co-founder of EquityZen, a marketplace for private stock sales.

Potential terms for the share sale are still being discussed, and the eventual valuation could change depending on investor demand, said the people, asking not to be identified because the information is private. A representative for WeWork, whose parent is The We Co., declined to comment.

WeWork is planning to kick off its IPO roadshow as soon as next week, Bloomberg News has reported. The company is targeting a share sale of about $3.5 billion, a person familiar with the matter said in July. That would be the second-biggest IPO this year behind Uber, another loss-making startup funded by SoftBank.

WeWork plans to take out a $2 billion letter-of-credit facility and a $4 billion delayed-draw term loan from several banks concurrent with the IPO. Lenders will have to make good on their commitments only if at least $3 billion is raised in the equity offering, according to a filing.

WeWork’s IPO plans filed last month were greeted by sometimes blistering criticism for the way it obscured key details about the economics of the business. The New York-based startup headed by Adam Neumann leases and owns spaces in office buildings, which it decorates and then rents out to companies from tiny startups to large corporations. It has raised more than $12 billion since its founding nine years ago but has never turned a profit.

Neumann, a co-founder and polarizing figure, has also courted controversy. Tangled business relationships involving Neumann and his family show an interdependence that runs deeper than most entrepreneurs to their creations and one that raises concerns among prospective shareholders. In particular, Neumann owns several commercial properties that he leased to WeWork, and he has sold significant amounts of his equity ahead of the public stock offering.

According to the IPO filings, WeWork lost $2.9 billion in the past three years and $690 million in just the first six months of 2019. Its annual revenue, though, had more than doubled to $1.8 billion in 2018, compared with $886 million the previous year.

--With assistance from Nabila Ahmed and Ellen Huet.

To contact the reporters on this story: Michelle F. Davis in New York at [email protected];

To contact the editors responsible for this story: Michael J. Moore at [email protected];