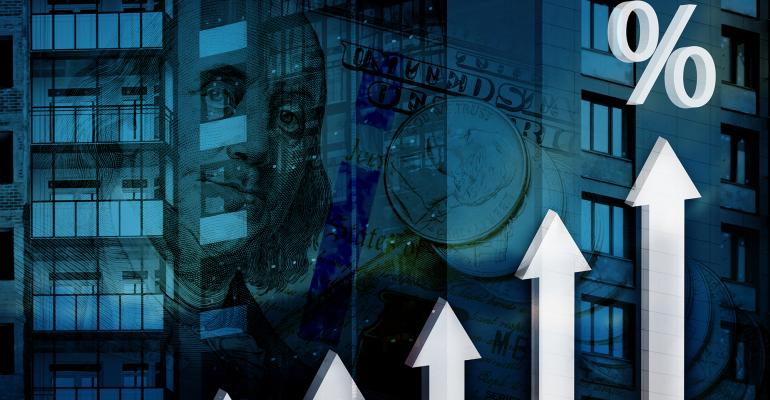 Capital costs are rising, but fundamentals remain strong and real estate is also benefiting as a hedge against inflation.

After a long run of incredibly cheap capital, the commercial real estate industry is adjusting to a big jump in the cost of debt. In some cases, loan rates that were quoted around 3 percent six months ago are now in the mid to high 4s. Yet just how impactful those higher financing costs will be on deal flow, pricing and investment strategy remains to be seen.

Real estate investors agree that higher capital costs are putting upward pressure on cap rates, and there likely will be some near-term choppiness in the transaction market as both sellers and buyers adjust pricing expectations. At the same time, the market has to account for some counterforces, including strong fundamentals and a still sizable amount of dry powder. In particular, there is “high velocity” capital from closed-end funds that have deadlines to place capital that has already been raised.

Related: REITs Got Swept Up in the Broader Market Selloff in April

Last week, the Federal Reserve raised the federal funds borrowing rate by another 50 basis points. The increase follows a 25-basis-point bump in March, which was the first rate increase since 2018. Although Fed rate increases are more closely correlated to short-term floating debt, many in the real estate industry also have been watching big moves in the long-term rate benchmarks.

The 10-year treasury yield has climbed sharply, rising about 140 basis points since early March to hover around 3.1 percent as of May 6. Layering on top of higher interest rates, many lenders have widened their spreads by 20 to 30 basis points to account for higher inflationary risk. The result is that loan rates being quoted by lenders are now 150 to 200 basis points higher than they were in first quarter.

“I think lenders are rationally asking for more compensation, because it is a riskier environment,” says David Bitner, head of Americas Capital Markets Research at Cushman & Wakefield. “That is not clanging the bells of doom, it’s just riskier than it was six months ago. So, it makes sense that spreads would widen in this environment,” he says.

One window into current financing rates is BBB or Baa corporate bonds that trade most closely with low leverage, long-term fixed-rate CRE debt. Those bond rates bottomed out around 2.22 percent in September of 2021, and as of early May were trading around 4.69 percent—a roughly 240 basis point increase. “We’re still collecting hard data, but it is very clear from talking to our professionals that we are now seeing low leverage fixed-rate debt in the mid- to high 4s,” says Bitner.

Predicting which way long-term rates will move is always tricky. CBRE expects the 10-year to remain around 3 percent for the remainder of the year. “There likely will be some volatility. But right now, we don’t expect the 10-year to climb much more,” says Darin Mellott, a senior director of capital markets research at CBRE. It’s also important to look at the higher rates in a broader context, he adds. “If you have rising rates amid strong economic growth that continues to propel fundamentals, that’s not problematic,” he says.

In addition, a 10-year that has crossed the 3 percent mark is hardly uncharted waters. The last time the 10-year went above 3 percent was in 2018, during a period of good economic growth and relatively strong transaction volume, notes Mellott. “What has people a little rattled is the persistence of inflation and what the implications are for the Fed and interest rates,” he says. Where there is concern gathering in the market, it is not necessarily in the immediate term, but rather potential risks that are more concentrated towards the end of 2022 and into 2023, he adds.

The two big questions are how higher capital costs will affect pricing and transaction volume in the near term, and the impact likely will be varied depending on the sector and asset. As WMRE reported just a few weeks ago, rising interest rates don’t appear to be stopping apartment buyers from making deals. Industrial investors also aren’t taking their foot off the gas. “The market has not paused. There is still a ton of activity and a lot of people trying to get equity out into the industrial marketplace,” says Erik Foster, a principal and head of industrial capital markets in the Capital Markets Group at Avison Young in Chicago.

So far, pricing appears to be holding fairly steady for core industrial assets in core markets, notes Foster. “Where we have seen pricing impacted the most is on single-tenant, long-term net lease (industrial) deals with fixed lease terms and with speculative development lending,” he says. Higher capital costs also are pushing some industrial buyers to look at different markets in order to get to the yields they require or that they have promised their equity investors. “The market is very fluid and some assets are being repriced. That being said, the buyer appetite and the number of buyers is still voracious at this point,” he says.

Yet investors across property types are absolutely “interrogating values” and determining what makes sense in the context of higher financing costs, adds Bitner. Buyers are changing assumptions and the yields that they require, whereas sellers have been slower to do so. Potentially, that divergence could result in a bid-ask gap that slows transaction activity.

Some deals are getting pulled from the market because bids are not meeting pricing expectations, and the owner is opting to hold or take a wait and see approach. “Most investors do believe that we’ll get through this rate hiking cycle, and you could be able to clear more attractive cap rates at some point in the future,” says Bitner. There also are those owners that think waiting it out could mean five years, and either they don’t want to, or are unable to wait that long to sell, he adds.

Higher capital costs may have a cooling effect on what has been a white-hot market. 2021 was an extremely strong year for investment sales, and fourth quarter in particular was a bit of a historical anomaly, notes Mellott. According to Real Capital Analytics, fourth quarter sales alone topped a whopping $325.6 billion. “It’s going to be very difficult to repeat that Q4, but there continues to be a lot of momentum in the market,” he says. Although deal volume pulled back from the highs seen in fourth quarter, activity was still robust at $170.8 billion, according to Real Capital Analytics.

Deals are still getting done. “I expect that we’ll see a strong first half, and we’ll start to see some of those headwinds impacting the market as we go into the second half of the year,” says Mellott. Pricing so far seems to be more stable on best-in-class assets where there is strong buyer demand. “We have heard of some Class B and C type product repricing, but nothing major or catastrophic. I would expect that repricing to continue to play out for the duration of the year,” he adds.