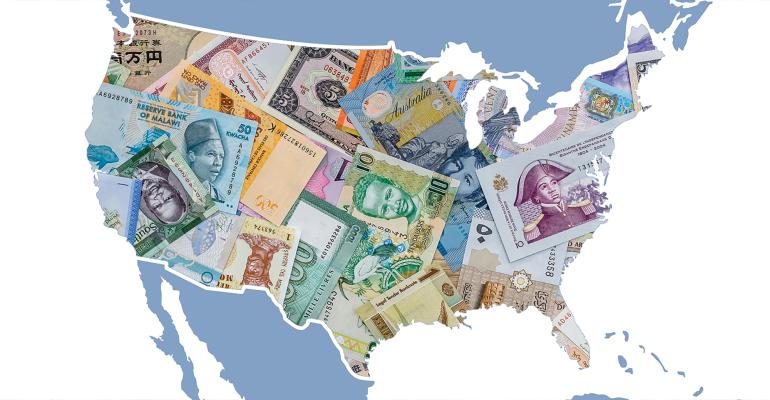 Overall volume has slowed and some entities have switched gears from buying properties to acquiring real estate platforms and operating companies.

GFH Financial Group, a Middle East-based investment group, kicked off 2023 with an announcement that it had bought a majority stake in Big Sky Asset Management, a $2 billion U.S.-based real estate asset manager focused on healthcare real estate. The investment follows GFH’s May 2022 acquisition of SQ Asset Management, a leading specialist in the U.S. student housing market.

Singapore-based GIC is another major player that has remained active. Last fall, the global investment firm partnered with Oak Street to acquire STORE Capital in a $14 billion deal. GIC also is reportedly part of a group that bought a majority interest in a 41-property office portfolio from Griffin Realty Trust valued at $1.1 billion.

Both deals illustrate that while there has been a sharp drop in cross-border transaction volume over the past year, some foreign investors continue to make big market moves to expand their U.S. real estate holdings.

“One of the trends that we’re seeing, particularly with the large sovereign wealth funds, is that they have been expanding into buying platforms and portfolios and operating companies as opposed to just buying real estate,” says Riaz Cassum, executive managing director in the Boston office of JLL Capital Markets, Americas.

Such megadeals stand out in what has been a quieter pace of foreign investment sales over the past six months. MSCI Real Assets was reporting a four-quarter rolling total of $63.4 billion worth of assets being acquired by cross-border buyers through third quarter. However, that rolling total is buoyed by a huge fourth quarter 2021. The expectation is that annual 2022 results will adjust much lower once fourth quarter sales are tallied.

JLL’s research shows tepid cross-border transaction volume for the first three quarters of 2022 at $19 billion, and Cassum expects cross-border volume for the year to come in closer to $30 billion—roughly half the 2021 volume. Foreign investors are following much the same playbook as domestic players these days, notes Cassum. “What’s going on in terms of monetary policy and rising interest rates has caused capital, both domestic and cross-border, to be cautious and slow down investment activity until there is more clarity on how high rates are going to rise and whether that turns into a recession in different parts of the world,” he says.

In addition to higher interest rates and uncertainty that are weighing on underwriting, some foreign buyers are dealing with additional hurdles that include a strong dollar and higher hedging costs, says Darin Mellott, a senior director of Capital Markets Research at CBRE. The U.S. Dollar Index (DXY) rose by almost 20 percent against some of the world’s major currencies last year and remains up about 15 percent. That has been a material increase for some non-dollar denominated investors coming into the U.S., Mellott says.

The currency impact has been lessened for foreign investors that already have dollar-denominated investments that are either getting cash flow in dollars or selling assets and redeploying capital. “I don’t think the strength of the dollar has been an impediment to investment into the U.S. However, the dollar is strong because our interest rates are high, which means that hedging costs become more expensive,” says Cassum. In particular, hedging costs have gone up quite a bit for certain currencies, such as the Euro and the Korean won, which is an added factor weighing on transaction activity for those investors that do need to hedge.

Foreign investors still favor the U.S. for a variety of reasons, including its stability and risk-adjusted returns. The decline in sales is more of a timing issue rather than people that are staying on the sidelines, notes Tim Bodner, real estate deals leader at PwC US.  “If you look at the largest foreign investors, they are very active and have very aggressive plans for 2023 and moving forward,” he says. In fact, a number of foreign investors are maintaining, if not increasing, their allocations to U.S. real estate, he adds.

Historically, foreign investors have focused on trophy assets in gateway coastal markets. However, cross-border buyers are expanding their scope to include niche asset classes, such as student housing, healthcare and even marinas. “There has been so much appreciation in those traditional sectors that they think they might find more relative value creation opportunities in these alternative asset classes,” says Bodner.

Although foreign buyers still like the gateway markets, they are expanding their focus to include growing secondary markets, particularly in the Sun Belt. “I think there is going to be a two-pronged approach where they are going to play in both markets,” says Cassum. “We’ve seen that from the institutions that were historically only investing in New York, Boston and Washington, D.C. that will now go to Dallas, Austin, Denver and Nashville.”

Activity is likely to be slow in the early part of the year, but greater clarity on Fed policy and interest rates should give investors more confidence in underwriting deals in the coming year. “I do think that all of those conditions that we cited as headwinds won’t be as problematic coming into the new year,” notes Mellott. Hedging costs are coming off of some of the highs seen last year, and the dollar rally seems to be fading at the beginning of this year. So, currency issues don’t seem as problematic and could potentially improve. “I think foreign investors will be included in that broader market recovery,” he adds.