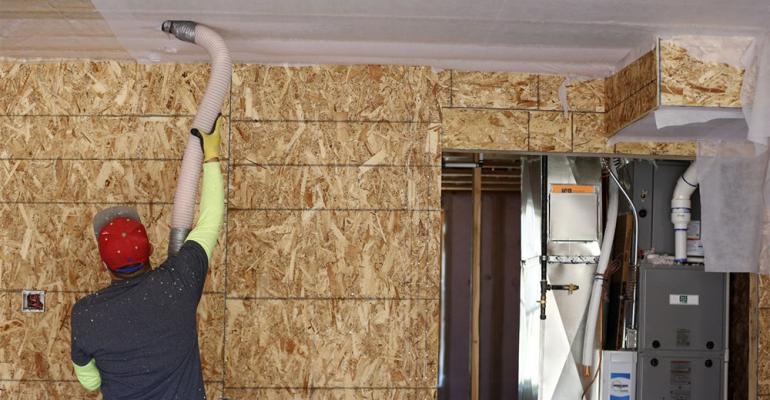 Ohio-based Aeroseal LLC helps improve energy efficiency in homes and offices by injecting a fog of sealant particles into roofs and air ducts which can cover cracks and holes as large as half an inch. The goal is to prevent hot and cold air from leaking, cutting utility bills and power consumption.

“Small amounts of leakage are a big deal,” said founder Mark Modera. The professor at University of California, Davis decided to focus on the problem after participating in experiments at the Lawrence Berkeley Laboratory, which showed that turning on the air conditioning caused the air exchange rate in a house to triple due to leaky ducts.

Homes and buildings consume about 40% of energy in the U.S. and more than half of the power of an average home there goes into cooling or heating spaces, according to the Department of Energy. Improving efficiency in buildings is one of the most effective ways to reduce greenhouse gas emissions that are warming the planet. The U.S. and the European Union are planning to invest billions in refurbishing old buildings as part of their post-pandemic stimulus plans.

“We see our technologies as building blocks for net-zero homes,” said Aeroseal Chief Executive Officer Amit Gupta. Builders are reluctant to construct energy-efficient projects because it increases their costs without also significantly increasing the values of the properties, he said.

Aeroseal is trying to change that by providing a cheap and easy solution. The company’s technology is based on simple chemicals that are turned into tiny particles which can flow inside an airduct or a room. When there’s a leak, the traveling air leads to a sudden change in direction (due to a difference in pressure), depositing particles around the leak. As more and more such particles precipitate, the leak is quickly sealed up.

This funding round marks an inflection point for Aeroseal, Gupta said. The company was first acquired by Carrier Global Corp. in 2001, but it struggled to flourish inside the large multinational. In 2010, Modera and Gupta decided to go it alone. Aeroseal has so far worked on more than 200,000 homes and office buildings, mostly in the U.S., a small fraction of the more than 100 million homes in America.

The company plans to use about half of the money raised, which also included funds from Energy Impact Partners and Building Ventures, to hire over 40 engineers. Currently, sealing ducts in a newly-built house takes less than an hour and costs between $500 and $600, while the process can take as much as six hours and cost between $1,500 and $2,200 in an occupied family home. Homeowners make the money back in less than five years through savings on energy bills.

Aeroseal also sells its sealant and the machinery needed to inject it to contractors and builders. Buyers aren’t just interested in contributing to a cleaner planet, Modera said, but are also convinced by the lower utility bills and better indoor air quality for their customers.

“Rather than having to smell what your neighbors are cooking or in California, where marijuana is now legal, when your neighbor is getting high, you don’t get high with them if you can seal the leaks between the apartments,” he said.

To contact the authors of this story: Laura Millan Lombrana in Madrid at [email protected]