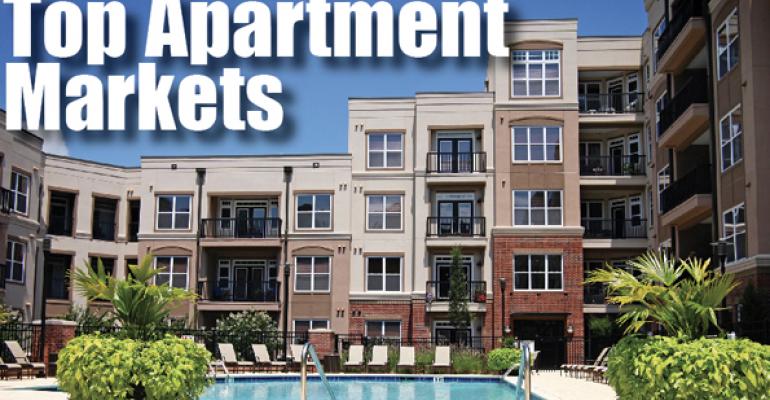 What makes an apartment market a “top” market?

Is it single-digit vacancy rates and double-digit rental rate growth? Can investors simply look at the most recent data from industry researcher Axiometrics Inc. and make their decisions based on numbers alone? If they do, they might end up investing in markets that are performing well today but lack any future growth prospects.

Or should investors take their cue from Wall Street and stick to the coastal markets—the so-called Sexy Six that regularly attract institutional investors? In doing so, investors might end up competing with every other investor and paying cap rates below 4 percent for assets that have little or no upside.

Ella Shaw Neyland, president of Steadfast Income REIT, agrees. The Irvine, Calif.–based non-traded REIT doesn’t limit its activity to coastal markets, nor does it focus exclusively on large markets. Most recently, for example, it purchased properties in Louisville, Ky., and Des Moines, Iowa. “We’re looking for signs of vitality,” she explains.

Likewise, Camden Property Trust has focused its attention on areas that “are going to grow faster than other areas,” says Chairman and CEO Ric Campo. “For example, we bought zero properties in D.C. in 2012 because we don’t think it is going to grow as fast as Texas, the Carolinas and Florida.”

Campo and other industry experts outlined five elements that create a top market for apartment investment.

Nothing generates demand for rental housing like population growth. Markets experiencing significant influxes of new residents are the best locales for apartment investment, according to Neyland.

But not all population booms are created equal. Demographics matter. For example, is the growth primarily because of births or is it due to people relocating to the market? Apartment owners benefit from the creation of new households and from migration. Adding people to existing households is less of a stimulus.

Multifamily experts point to Texas as an example where an influx of residents is taking place. From 2010 to 2011, the Lone Star State boasted four of the five fastest growth metro areas with at least 1 million residents, according to the U.S. Census Bureau.

These two metro areas also were the biggest gainers during the 2000 to 2010 period (with Houston gaining more than Dallas–Fort Worth over the decade).

The fifth market was Raleigh–Cary, N.C., and a number of high-profile apartment investors have identified this college market as one in which they hope to expand. Associated Estates’ Friedman ranks Raleigh–Cary as one of the top investment markets for the REIT.

In 2012, the REIT invested nearly $110 million in three Triangle properties including: The Apartments at the Arboretum, a 205-unit community in Cary; the 211-unit Southpoint Village Apartments in Durham; and the 344-unit The Park at Crossroads in Cary.

The age of the new populace influences the desirability and performance of multifamily markets as well, according to Friedman. Younger residents tend to be renters rather than homebuyers since they want to maintain mobility for employment and choose to avoid being weighed down by a mortgage.

Many of the markets that rank in the top 10 for greatest average annual net migration by young adults also rank near the top for apartment investment. According to the Brookings Institute, four of the top 10 markets for in-migration for adults ages 25 to 34 were in Texas, while the number one market was Washington, D.C.

For college graduates ages 25 to 34, the top market for in-migration was Dallas–Fort Worth. Other cities in the top 10 include: Washington, D.C., Houston, Denver, Seattle and Charlotte, N.C.

The impact of younger residents is obvious in Charlotte, Campo notes. “Charlotte has been a surprise for us in terms of performance since a large part of the job base is generated from the financial sector, which is still shedding jobs,” he says.

Nonetheless, the REIT’s properties in Charlotte have outperformed its other assets, particularly those in California. “If you look at who is losing jobs, it’s not young adults,” he says.

Industry experts point out that job growth plays a huge role in creating demand for the apartment sector, and multifamily investors are keen to put their money into markets that have a strong and expanding employment base. Steadfast Income REIT, for example, is looking to invest in markets that show job growth across multiple sectors and various employers, and has several Texas markets on its radar, Neyland notes.

In Texas, the Dallas Federal Reserve predicts statewide job growth of 2 percent to 3 percent in 2013, down slightly from 2012’s 3.2 percent growth but up from 2011’s job growth of nearly 2 percent. Energy, exports and construction have driven Texas employment above its pre-recession level.

Recent data from Axiometrics Inc. shows the apartment markets with the highest rental rate growth and occupancy also are the areas that have generated above-average employment growth. Northern California’s Bay Area is a perfect example—it consistently shows up as one of the most desirable for apartment acquisitions and is one of the “Sexy Six” coastal markets for overall real estate investment.

San Francisco posted job growth of 3.4 percent from January to October 2012. As of November 2012, its occupancy rate was 94.9 percent, and its year-to-date effective rent growth was 7.4 percent, according to Axiometrics.

Similarly, Houston recorded job growth of 3.2 percent for the same period, according to Axiometrics. As of November 2012, the market’s occupancy rate was 93.1 percent, and its year-to-date effective rent growth was 6.5 percent.

Meanwhile, Camden Property Trust experienced much more impressive growth in Houston, according to Campo. He says the REIT’s same-property NOI was up 11.1 percent for 2012, following an increase of 9 percent in 2011.

Job growth alone cannot compel investors to make a bet on a specific market. Norman Radow, president and CEO of the RADCO Cos., says it’s the type of new jobs that determine the apartment investments his firm makes.

For example, RADCO recently inked a deal to acquire seven properties in suburban Atlanta. Radow says the firm sees plenty of demand for class-B properties since much of the job growth in Atlanta is blue collar.

In the multifamily world, investors are familiar with the concept of high-barrier-to-entry markets. In fact, some of the most desirable investment markets are classified as having high barriers to entry—the coastal markets of New York City, Boston, Washington, D.C., and San Francisco, for example.

It’s worth noting, however, that many investors are interested in markets that do not have high barriers to entry. In fact, most major markets in Texas and Florida have a reputation for being “easy”—that is, easy to build in.

“For us, it’s a submarket story,” Friedman explains, adding that there are a number of situations in which specific submarkets are more attractive than overall market. In Dallas, for example, Associated Estates is developing an apartment property in the Uptown submarket just north of Dallas’ city center. The Uptown submarket has little or no land left to build upon; moreover, there is plenty of demand in the Uptown market to absorb new inventory.

According to Ronald Johnsey, president of Dallas-based Axiometrics, it’s no coincidence that the top-performing apartment markets (from an occupancy and rental rate growth perspective) are also the places that are home to a highly educated population.

What’s the correlation? It comes down to employment, of course. Employers want to establish a presence in markets where they can find educated, skilled employees. Moreover, the existence of universities also contributes to an educated workforce.

Austin is one of Steadfast Income REIT’s favorite markets, according to Neyland. The REIT recently invested $18.3 million to acquire Montelena Apartments, a 232‐unit garden‐style apartment community in the Austin suburb of Round Rock, which is also the home of the computer company giant Dell.