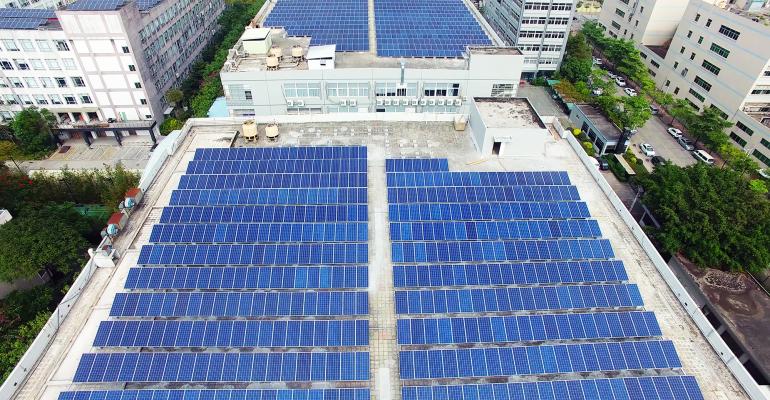 Calculating the Costs of Moving to Net Zero

Cutting greenhouse gas emissions will affect real estate investors. The question is how much?

In August, the Intergovernmental Panel on Climate Change issued a harrowing report that concluded that nations had waited too long to curb fossil fuel emissions and there is no longer a way to stop global warming from intensifying over the next 20 years.

That has put renewed pressure on countries to cut emissions to avoid an even worse trajectory. In the U.S., many cities and states are enacting net zero legislation with Boston becoming the latest city to pass an ordinance that sets emissions performance standards on existing buildings with the goal of decarbonizing the city’s large building stock by 2050.

That will mean upfront costs to increase energy efficiency and reduce emissions even as the toll of unchecked climate change is already having massive financial impacts in the form of disasters that are increasing in frequency and intensity. As of early October, the U.S. had experienced 18 different weather/climate disaster events that exceeded $1 billion in damages, according to the National Centers for Environmental Information. The cumulative costs for these events is north of $100 billion on the year, putting 2021 on pace to the third most expensive year since 1980.

What’s less clear is who will bear the brunt of the costs associated with the implementation of net zero strategies and how this will affect real estate investors’ returns. That’s what Green Street set out to answer with a recent report assessing the potential costs of net zero across 17 property sectors. It’s a particularly relevant question given that the operation and construction of buildings account for an estimated 40 percent of global greenhouse gas (GHG) emissions, according to the report.

The Green Street analysis starts with a tally of total greenhouse gas (GHG) emissions per square foot for a portfolio of REIT-quality operating real estate assets. Total emissions per square foot data is translated into a hypothetical total potential cost by multiplying a landlord’s owned square footage by an assumed carbon price. The data set is amalgamated from REIT and tenant disclosure, landlord surveys and meetings with ESG experts.

There are three main buckets for classifying emissions.

According to the report, “Scope 1 emissions are released into the atmosphere as a direct result of activities occurring in the building, like natural gas combusted in the boiler. Scope 2 emissions are reported for electricity, heat, steam, or cooling generated elsewhere but consumed at the properties and paid for by the landlord. REIT reporting on scope 1 and 2 is rather clear and consistent.”

One of the key takeaways from the analysis is that the movement towards net zero appears likely to result in a drag on property prices, property owners will have to invest in things such as more energy efficient systems, on-site solar and the purchase of green power purchase agreements. Ultimately, those costs will be offset, at least partly, by higher rents and/or lower operating expenses. However, there is still the cap-ex spending to consider. “The way that we think about it is that this will be a net cost and a net drag on property pricing,” says Bragg. “So, there is going to be an impact here that needs to be assessed by real estate investors and something that deserves implementing in an underwriting framework.”

A second notable finding is that the impact will be unevenly distributed across property types with some sectors better positioned than others. Those property sectors that are expected to experience a “big” impact of a 5 percent or greater reduction to warranted value are data centers, lodging and cold storage. Those likely to see a “moderate” hit of 2 percent to 5 percent are office, retail and industrial. Sectors with low levels of emissions that should feel a negligible impact to value of 0 to 2 percent are multifamily, student housing, storage, labs and gaming.

“The impact on warranted values equates to about one-third of the hypothetical total potential cost of emissions, which makes sense when considering that the cost will be borne in part by landlords and over a long period of time,” according to the report.

Is there a business case for net zero?

While much of the push for net zero is coming from external forces, real estate owners and operators are assessing the business case for adopting these strategies. Are they only a net cost or are their ways moving to net zero can improve the bottom line? Potential economic incentives include higher rents, reduced costs stemming from energy efficiency and after-tax savings or accelerated depreciation.

Marta Schantz, senior vice president of the Greenprint Center for Building Performance at the Urban Land Institute, argues that this is the case.

“What we’re seeing is that there is growing momentum for real estate owners and developers to work towards net zero, first and foremost because there is a financial business case,” Schantz says.

When operators reduce energy consumption and improve energy efficiency it translates to lower costs, higher net operating income and higher asset value. “So, there is a direct correlation to reduced energy consumption,” she says.

But Anthony M. Graziano, MAI, CRE, CEO of Integra Realty Resources, a commercial real estate valuation and advisory firm, says it is unlikely the market as a whole, absent regulatory pushes, would move fast enough to meet 2050 climate goals under a “Good Samaritan” theory of economics. “The primary driver has to be economic incentive–feasibility,” he says.

Regulatory pressure is already coming down as more municipalities pass ordinances on building-level carbon emissions that are tied to fines for those that don’t comply. For example, the first tranche of fines for New York City Local Law 97 will go into effect in 2024. In Boston, meanwhile, buildings that do not comply with emissions reporting requirements will eventually face fines of between $150 and $300 per day based on their size. And ones that do not reach the emissions standards could see fines of up to $1,000 per day. In addition, owners that do not accurately report emissions could see fines of up to $5,000.

One of the challenges in the net zero business case is that it is still early in terms of developing quantifiable metrics. There are not enough buildings or portfolios that have achieved net zero goals to be able to offer data on how the strategies impact rents, occupancies and building values.

“There is certainly a component of the market that will sell the qualitative benefits, but we will not see measurable differences until we can quantify the economics,” says Graziano. Companies that are promoting qualitative benefits without economic realization are actually harming real efforts, because investors get poor returns and are discouraged from making changes across their entire portfolio, he says. “Other market makers are watching and seeking quantification, and the fuzzy math perpetuates more inaction,” he adds.

The CRE industry is working to create some metrics and benchmarks around the business case for net zero, but there is a long way to go. Traditional data points, such as building age, building operating cost analysis, market rent and tenant demand, are all primary current proxies for ESG, but are not explicitly derived indicators of ESG value, notes Graziano. One example of explicit indicators would be Platinum and Gold LEED buildings and their relationship to tenant demand and higher rents achieved in the market. For instance, mandates from GSA and others that a certain percentage of building leases must be for Platinum or Gold LEED buildings drives tenants to a limited stock of buildings. Theoretically, those buildings are then in higher demand and can command higher rents, he adds.

“It is not inexpensive to achieve net zero overnight. Over time you can certainly do it in a more measured way. But the value and ROI in decarbonizing and reaching net zero is about more than increased rents and decreased operating expenses,” says Schantz. “There are a lot of different qualitative pieces, and more and more owners are seeing that.” And those qualitative factors, such as attracting and retaining tenants, future-proofing buildings and brand reputation are big drivers in the market these days, she adds.