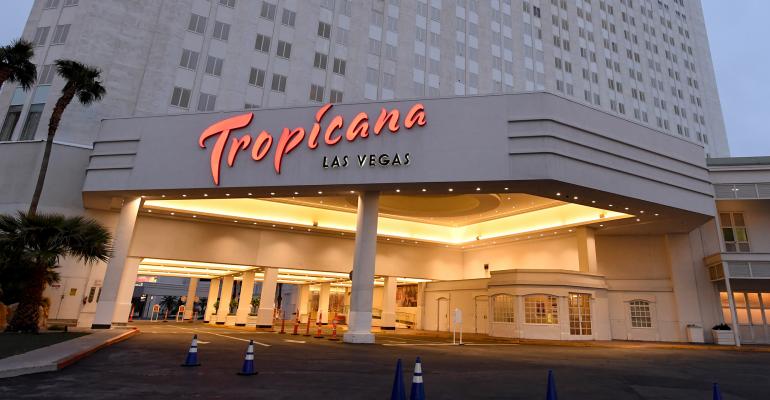 Bally’s to Acquire Tropicana in Las Vegas for $150 Million

The company is purchasing the operations of the hotel and casino report from Gaming & Leisure Properties Inc.

(Bloomberg)—Bally’s Corp. agreed to buy the Tropicana casino in Las Vegas for $150 million from Gaming & Leisure Properties Inc., part of a flurry of deals by the acquisitive Rhode Island-based gambling operator.

The company is purchasing the operations of the hotel and casino resort, which is located on the Las Vegas Strip, Bally’s said Tuesday. Gaming & Leisure, a real estate investment trust, will continue to own the property and collect rent. The Tropicana ground lease is valued at $8 million.

Bally’s shares tumbled as much as 15% to $51.94 in New York trading Tuesday, their worst slide in more than a month.

The addition of the Tropicana gives the company its first foothold in Las Vegas, the capital of gambling in the U.S. Bally’s will probably remodel the property, including new signage and more slot machines, Chairman Soo Kim said in an interview. Having a casino right on the Strip was the lure, he said.

“It’s hard to be a national player in gaming without a casino there,” Kim said. “It’s a tried and true pathway that companies like Caesars and MGM have proven.”

While still recovering from the pandemic, which shut down casinos across the country for several months, the gambling industry has seen a surge in deal-making related to the expansion of sports betting, which was legalized three years ago by the U.S. Supreme Court.

Since casinos and horse tracks are already licensed to accept bets, the expansion of sports betting and online gambling has created a land grab among competitors looking to establish a presence in each state. Bally’s, which consisted of just one casino in Rhode Island several years ago, will soon operate properties in 11 states. The company acquired the Bally’s name last year from Caesars Entertainment Inc.

Gamesys, with over $900 million in revenue and 700,000 active players online, will give Bally’s a jump-start in the internet-wagering business, including online brands popular in Europe, such as Virgin Games, Jackpotjoy and Monopoly Casino. The combined business will be roughly evenly split, profit-wise, between online and land-based casinos.

“What we plan to do is take their technology, expertise and people, and bring them to the U.S.,” he said.

As part of Tuesday’s announcement, Bally’s also agreed to sell properties in Black Hawk, Colorado, and Rock Island, Illinois, to Gaming & Leisure for $150 million. Bally’s will lease and operate the facilities.

The Tropicana, which opened in 1957, is one of the oldest resorts on the Strip. It’s changed hands many times, most recently last year, when Penn National Gaming Inc. sold the property to Gaming & Leisure for $308 million.