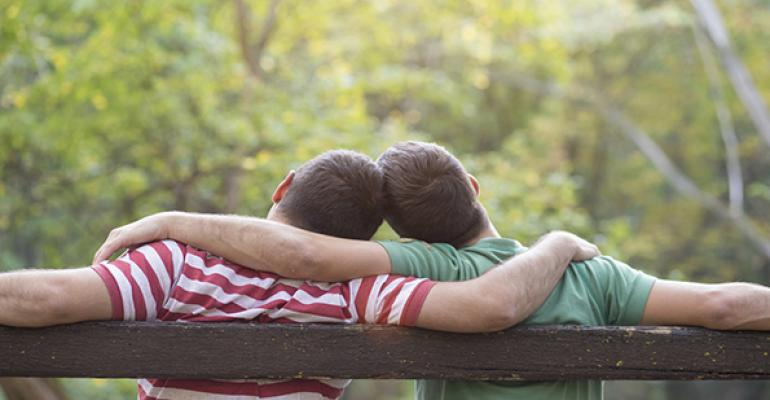 It has been one year since the U.S Supreme Court struck down the Defense of Marriage Act, opening the way for legally recognized marriages between same sex couples at the federal level. These marriages are now legally recognized in twenty states. More than 72,000 same-sex couples nationally have tied the knot, according to the Pew Research Center.

There are no underwriting differences in determining premiums for same-sex couples compared with heterosexual couples, says Maggie Mitchell, a sales executive with Voya Financial. But, she says, same-sex couples tend to be younger and buy low-cost term insurance. Yet they are slightly more affluent than traditional couples.

“You are going to see a strong response in the marketplace because they have a little more money,” she says. “These policyholders are expected to convert term policies to permanent protection or buy new cash value policies.”

If the life insurance death benefits plus the value of their other assets fall below that threshold, planning becomes significantly easier. They no longer need to pay a trust administrator to own life insurance. They can transfer money to each other free of the gift tax to pay life insurance policy premiums.

In states that recognize same-sex marriages, married couples can name a policyholder’s spouse as beneficiary. This triggers potentially added advantages when the contract holder dies. Among those: All or part of the distributions to the contract owner can be given to the other spouse without triggering the gift tax thanks to the gift tax marital deduction. The spouse beneficiary can roll over an annuity into his her own name after the owner’s death. The surviving spouse can then name new beneficiaries to the contract. The surviving spouse also can also do a 1035 tax-free exchange into a different annuity.

On the insurance side when the second spouse dies, a second-to-die life insurance policy also may be used to pay estate taxes or for wealth replacement.

Only in states with legal same-sex marriages can a surviving spouse roll over retirement savings proceeds into his or her own Roth or traditional IRA. Then the surviving spouse can name new designated beneficiaries and take required minimum distributions when he or she is 70 and a half years old.

Unfortunately, same-sex couples residing in the 31 states that have not legalized same-sex marriages have significantly fewer benefits.

They still can get life insurance or make their partners a beneficiary of a life insurance or annuity policies, but they must have an “insurable interest,” according to Alfred Dingler, a Fayetteville, GA-based financial planner. In other words, one partner must face an economic loss from the death of the other.

Dingler, whose state doesn’t recognize same-sex marriage, says he still was able to help a pair of male partners in their forties get insurance coverage. When one partner died at age 47, the surviving partner was able to pay the mortgage on the home they jointly owned, plus pay the tax on IRA benefits the survivor received due to IRS rules that require a lump sum payout to a non-spouse beneficiary.

“Unfortunately, unless a state recognized same sex marriage, same-sex couples cannot get second-to-die life insurance coverage for estate planning,” Dingler says. ”Nor can they set up a joint-and-survivor annuity payout.”

There are some specific ways an advisor can help either married or unmarried same-sex couples. A 2011 Journal of Financial Service Professionals report by Stuart Armstrong, a Boston-based financial advisor, recommends that advisors: