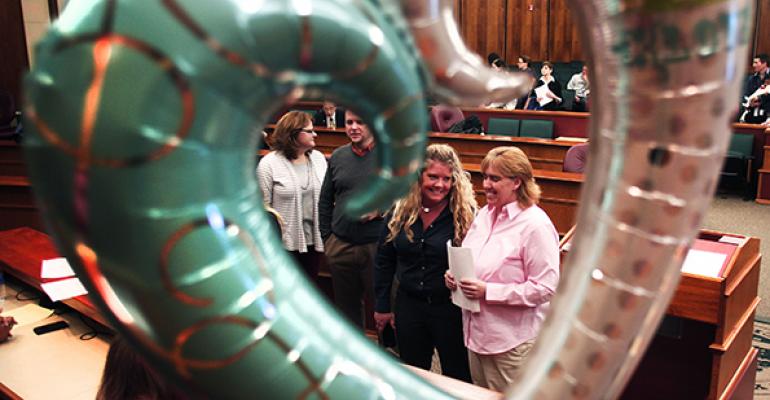 Progress in implementing changes has been uneven, mainly because not all states recognize same-sex marriage

One year after the Supreme Court struck down restrictions on recognizing same-sex marriage, the landscape for spousal rights to retirement benefits has changed.

Here’s where Social Security and Medicare stand one year after DOMA’s demise, along with notes on taxes and employer-provided retirement benefits.

Joint Social Security benefit planning is a must for all married couples. Spousal and survivor benefits boost the program’s value significantly, and those benefits are now opening up for same-sex couples.

If you have same-sex married clients living in a state that recognizes their union, the Social Security Administration (SSA) now treats them like any other married couple, which means spousal and survivor claims are valid. The SSA also has streamlined the way it handles marriage-based claims involving transgender individuals.

But the Social Security Act’s definition of marriage prevents the SSA from recognizing same-sex marriages in states that don’t recognize those unions. That means if you have clients who were married in a marriage equality state but then move to a state without it, spousal and survivor benefits aren’t available. The Obama Administration has said it will propose amendments to the Social Security Act soon to address this problem.

Last month the SSA took an incremental step forward as part of a broader federal initiative to extend a wide array of benefits to same-sex couples. The agency will now recognize spousal benefits to married couples living in states that don’t recognize same-sex marriage but have laws that recognize an inheritance right for a same-sex spouse - for example, states that permit civil union or domestic partnership.

If you have clients who think they may be eligible for spousal or survivor Social Security benefits, they should go ahead and file regardless of where they live. That step could qualify couples to receive retroactive benefits if, and when, the state-of-residence issue is resolved.

Most parts of Medicare aren’t bound legally by state-of-residence restrictions, so the program’s reforms have been more extensive than those made by Social Security.

In states recognizing same-sex marriage, same-sex spouses are recognized for all aspects of Medicare. The most important reform affects delayed filing decisions; individuals who have health insurance through a same-sex spouse's employer-based insurance can now keep that coverage and delay enrolling in Part B of Medicare past age 65 without facing a penalty. This bears careful monitoring on behalf of your clients, because Medicare imposes stiff penalties for late enrollment.

Medicare’s hospitalization benefit (Part A) is provided premium-free to most Americans - but a small number don’t qualify if they don’t have at least 40 quarters of work history (and payroll tax payments into the Medicare Hospital Insurance Trust Fund). If your clients live in states recognizing same-sex marriage, a spouse who wouldn’t normally qualify can now get coverage at no charge based on a spouse's work record.

People who live in states that don't recognize same-sex marriage, but were married elsewhere, have access to all the above-mentioned with one exception: they can’t get premium-free Part A hospitalization coverage based on a spouse's work history unless they are in a civil union or domestic partnership and living in a state that recognizes inheritance rights.

Corporate America has been far ahead of the curve on reforming benefit programs to recognize same-sex couples.

Among major corporate employers, 84 percent have extended retiree healthcare coverage to domestic partners, according to an annual survey by the Human Rights Campaign, an LGBT rights advocacy group. And amendments in 2008 to the Pension Protection Act allow non-spouse beneficiaries to rollover inherited benefits directly to an IRA. Among employers that have defined benefit pension plans, 76 percent provide survivor options for domestic partners.

The IRS and U.S. Treasury Department announced last year that all legally married same-sex couples can file joint federal tax returns no matter where they live. That will be financially beneficial for most couples, but there’s one retirement-related wrinkle to be aware of: Medicare’s high income premium surcharges.

Medicare beneficiaries with income over certain levels pay surcharges for Part B (outpatient services) and Part D (prescription drugs). For individuals, the surcharges kick in at $85,000; for joint filers, it’s $170,000. In some situations, joint filers with one high earner will pull a lower-income spouse into surcharge territory.

A Q&A on Medicare benefits for same sex married couples is available at SAGE USA.

An IRS fact sheet on tax returns can be found here.