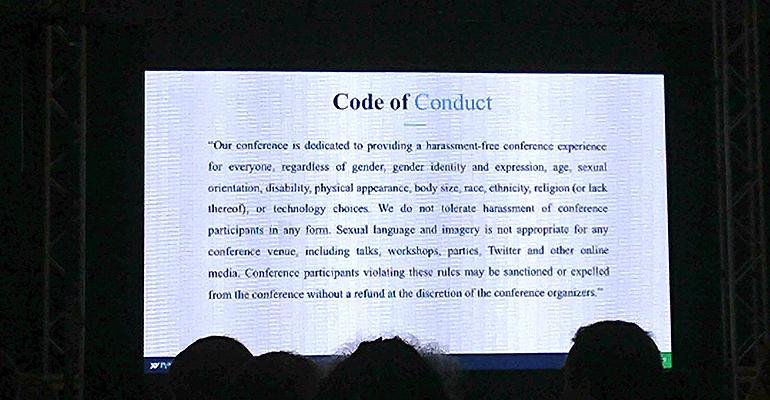 With a diversity committee and new anti-harassment code of conduct, the XY Planning Network wants to change the culture of industry events.

It’s a reality particularly noticeable at industry events and conferences. Many women advisors can share stories of harassment at conferences, ranging from inappropriate comments and unwanted physical contact to subtler forms of sexism—like presuming women at a convention can’t be a fellow financial professional.

“I would walk through exhibit halls as a planner and I would be asked whose assistant I am. Why did [they] assume that?” said Breanna Reish, an advisor with nine years of experience who recently launched her own financial-planning firm as a member of the XY Planning Network. She said most women she knows have similar experiences, and conferences can make women “feel out of place and few in numbers.”

“I try not to be overly sensitive, but even if it’s not intended, there is still some sexism,” Reish said.

It’s a part of the financial-services culture that’s not often discussed, and one that the XY Planning Network is hoping to change by addressing it head on. During the opening keynote of XYPN’s annual conference last week in Dallas, founders Michael Kitces and Alan Moore introduced a new code of conduct that explicitly prohibited any form of discrimination or harassment due to gender, sexual orientation, race, ethnicity, age or even ability with technology.

The event’s app included a function for reporting inappropriate conduct, and violators would be removed from the conference and banned from future events. Moore and Kitces said their hope is to get other conferences to follow their lead in discouraging behavior that makes anyone feel unsafe or unwelcome.

Several conference attendees—both men and women—said they appreciated the zero-tolerance policy, and how the policy was established right at the outset of the conference.

The Code of Conduct is a good thing #xypn17

Really happy the @XYPlanning conference has a robust anti-harassment code of conduct. This is how we change the culture in finance. #XYPN17 pic.twitter.com/m8zqodkOMe

“Setting the tone upfront is great,” said Kate Dore, a personal finance blogger currently working toward Certified Financial Planner credentials. “Having come from male-dominated industries in the past, it’s always encouraging to see—coming from the top down—that tone being set.”

Moore said the policy wasn’t a reaction to an incident at a past XYPN conference, and didn’t think it was something that needed to be put down in writing. But after years of hearing horror stories and even witnessing sexual harassment in person, he decided to use his position to try and influence a change.

“We could make a difference here by setting the standard,” Moore told WealthManagement.com. “We do need a code of conduct to lay the foundation so we’re all on the same page of expectations.”

To that end, XYPN established a diversity committee tasked with addressing the issues not only of women advisors, but of people of color and LGBTQ advisors as well. One of the first missions was to develop the code of conduct.

Amy Irvine, a member of the diversity committee and the owner and principle of Irvine Wealth Planning Strategies, said Kitces and Moore have been supportive of diversity from the get-go, but have stayed out of meetings to allow for open and free conversation among members. While she’s never experienced any problems at XYPN, she’s hoping the committee’s work can help make the industry at large a more inclusive space.

“We all have preconceived opinions about what norms are within each person’s culture and gender,” Irvine said. Though the conversations can be uncomfortable, she said they are important to improve how people talk to each other, how people understand each other, how firms can attract more diverse advisors, and how advisors can reach a more diverse clientele.

At the XYPN conference, Irvine participated in a panel on the challenges of being a minority in financial services, a round-table discussion for women in finance, and helped organize networking happy hour dubbed “Finance in Heels.”

Dore attended the event and said it was a chance to safely discuss the experience of being a woman in finance, and was a chance for new advisors to network with veterans for possible mentorships opportunities. Reish said that while she was a bit skeptical of the idea at first, it was refreshing to see so many female finance professionals gathered in one spot.

“I’m used to going to things and being the minority, by far,” Reish said. “Good positivity came out of it that I wasn’t really expecting.”

The event didn’t face a backlash from male conference attendees, like the kind faced by all-women screenings of the movie “Wonder Woman,” but some women objected to the branding. Kali Hawlk, XYPN’s former director of marketing who left to launch her own marketing firm, said she had no problem with anyone participating and hopes to see more events like it in the future, but felt the “lipstick and high-heels” message “only feeds into an image of women and how they’re supposed to be that I don’t think is helpful to the mission of getting more female advisors, professionals and experts in this industry.”

“Even if it is supposed to be playful and fun, there’s a lot at stake here, “Hawlk said. “Too many established veterans in this industry don’t take women seriously. This is not helping… How you want to present yourself is 100 [percent] up to you and I think creating a 'look'—whatever that is—is a great marketing and branding tool. But when you take that and apply it over an entire group that's trying to fight preconceived notions, stereotypes and gender-based barriers, it hurts us as individuals and it holds us back as women trying to make progress.”

Irvine said she heard this criticism, understands it, and will use the input to take a different approach in the future.

“It’s a learning experience,” she said.

Ultimately, that’s the goal—to have these difficult conversations and encourage similar learning experiences around the industry. Though XYPN tends to be more diverse than the rest of the industry—Kitces said 15 percent of the Network’s members are non-white, while 26 percent are women—there’s still a long way to go.

“We would love to see [XYPN membership] look like what America looks like,” Irvine said. “And the way you do that is with baby steps.”