XYPN kicked off its fourth annual conference with a series of announcements on recently completed and upcoming integrations, as well as benchmarking figures, in front of roughly 300 of the organization’s nearly 750 members. The fee-only advisor organization also indicated areas of business investment for the future, including improving its search portal and members’ forums.

Billing firm AdvicePay is building an e-signature integration that it expects to be live in the next two weeks. It will allow advisors to onboard and receive payment in one step. Using DocuSign, all inputting information will be dispersed to the appropriate fields across multiple screens, allowing clients to pay and sign on in one step.

“The more integrations, the better,” said Ryan Frailich, founder of Deliberate Finances, who uses AdvicePay in his practice and was looking forward to the improvement. He said the integration should save him time and make for a better client experience.

Financial planning software firm RightCapital will be launching an app at the conference. The firm has been growing since it started 3 years ago, recently announcing a business partnership with Betterment for Advisors. Because RightCapital has budgeting and spending tracking functionality, the company’s app should make it more competitive with services like Intuit’s Mint app, said Frailich. “People do live on their phones,” he added.

Rounding out the integration announcements, PreciseFP will be showcasing a new iteration of its service, which will include a new interface.

XYPN co-founders Michael Kitces and Alan Moore displayed the results of their most recent benchmarking survey, which quantified what many members seemed to already know: the first 2 years of working within the XYPN model, when starting from scratch, is a very lean time.

“The first year sucks for everyone. It just does. I’m sorry. We’re trying to figure out how to make it less sucky,” Kitces said. “Suddenly by the third year it starts to get a little easier.” 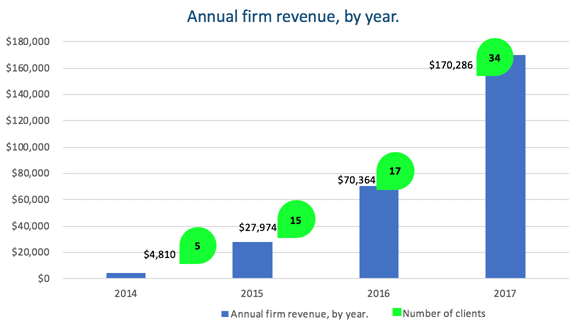 About 5 to 6 percent of members don’t make it after their first year, said Kitces, but by year three there were “basically no failures.” The biggest failure points are members struggling to get prospects to become paying customers and members not saving enough to outlast the periods of low revenue in their first and second years, he added. He emphasized the power of serving a niche and noted that growth momentum picked up when members focused on serving particular types of clientele.

Part of the revenue lift between year two and three is from advisors rightsizing their fees. “100 percent of members raise their fees in the first three years,” Kitces said. To help advisors get on a more even footing more quickly, XYPN is providing increased training around sale of advice so that they charge new clients the right fee from the start and provide templates for the financial planning process. “We’re not here to give Happy Meal financial plans,” he said. “It’s full-scale financial planning.”

“We’re telling members that whatever fee you think is appropriate, raise it 50 percent,” added Moore. “Skip that painful period of raising fees and start there instead.”

That said, very few of the advisors at XYPN are completely new to the industry. “We frankly tend to discourage those people, from growing the network cold,” noted Kitces. The median age of the organization’s advisors is 38 years old, he said, adding that financial advisors who come to the organization with experience are better at growing a business.

Roughly 60 percent of the firms joining XYPN need to be registered as an RIA, noted Moore, down from 80 percent when the organization first started.

For its own members, XYPN will be improving its “find-an-advisor” search functionality and overhauling its members-only forum, which may mean a move away from MangoApps. The aim for improvements to the search functionality is to help drive more business to advisors, part of the co-founders’ push to get more tools to help XYPN advisors weather their first few years. The members-only overhaul is expected to be complete by Q1 2019.

In response to members asking for tax preparation for their businesses, XYPN announced the beta testing of a white-label tax preparation service for advisory firms, offered by bookkeeping firm FA Bean Counters.

Moore and Kitces concluded by noting their advocacy work with regulators and the CFP, underlining meetings taken with state regulators and the North American Securities Administrators Association, as part of XYPN’s goal to eventually bring the planning services of 10,000 fee-only financial planning members to 1 million Americans within two decades.