/sites/all/themes/penton_subtheme_wealthmanagement/images/logos/footer.png
Recent
Recent
NYC Luxury Theft Boss Planned Own ‘Department Store,’ City Says
May 26, 2022
Seven Must Reads for the CRE Industry Today (May 27, 2022)
May 26, 2022
What’s the State of the Capital Markets for Cannabis Real Estate?
May 26, 2022
How to Diﬀerentiate Your Financial Advisory Practice
May 26, 2022
Featured
The 10 Best and 10 Worst States in Which to Retire in 2021
Jul 15, 2021
Poll: 15 Classic Books on Investing and the Markets
Apr 03, 2020
Fifteen Must-Listen Business Podcasts for Advisors
Aug 14, 2020
Celebrity Estates: Jay Leno and Planning for Classic Car Collections
Feb 22, 2022
DOL Fiduciary Rule
brought to you by 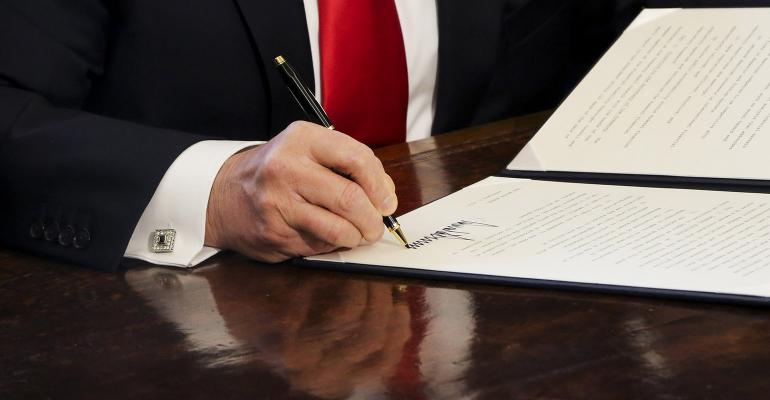 Will the Market Move Toward a Fiduciary Standard Even if DOL Backs Away?

Many industry executives expect the trend towards fiduciary standards of advice to continue, driven by market forces if not regulatory action. Others are not so sure.

President Donald Trump signed an executive order Friday afternoon ordering the Department of Labor (DOL) to undertake an economic and legal review of the pending fiduciary rule. If needed, the department can delay its implementation of the rule beyond April 10 to complete the analysis.

Few industry watchers doubt the move was the first step to delay the rule, and give President Trump's pick for Deptartment of Labor secretary a chance to reverse the law.

Still, many are equally sure that the market dynamics have already been set in motion with a growing public awareness of the importance of the standard, the dangers of conflicted investment advice and focus on low-cost investment options. Many brokerage firms, included Merrill Lynch and LPL, have adjusted their business models to comply with the rule, and are unlikely to change course.

“The DOL cat is out of the bag," said John Anderson, managing director at SEI Investment Co. "The industry would be wise to continue down the path of full fiduciary business implementation. Even with the DOL rule’s delay, fiduciaries should strive to put clients’ interests first. We remain committed to providing a suite of fiduciary services that help our clients ease through this transition in alignment with the level-fee trend."

Skip Schweiss, head of RIA advocacy for TD Ameritrade Institutional, said during the custodial firms national conference for RIAs that the order does not necessarily order an immediate delay; it instructs the DOL to review the impact of the rule. If the agency needs more time it can push back its implementation.

Either way, he said, most firms have already made adjustments in their businesses to comply, and he doesn't expect them to undo those changes.

However, others aren't so sure. “The retirement savers and investors are not as up on the fees and standards as people might think,” said Scott MacKillop, founder of First Ascent asset management. “Large sections of the industry will not adopt a fiduciary standard if they don’t have to, and those who are being taken advantage of will continue to be taken advantage of.”

MacKilliop said it was particularly galling that the Administration makes it sound like they are making these decisions out of concern for the small investors, arguing that the rule was rushed through, and that it will hurt small investors. Critics of the rule “make it sound like they are doing a good thing for these people, when they know that’s not true.”

“Many broker/dealers have already spent a lot of money implementing the rule,” said Todd Cipperman, founding principal of Cipperman Compliance Services, a provider of outsourced chief compliance officer duties and regulatory compliance services to RIAs, funds, b/ds, private equity, and alternative investment firms. “It is not likely that they will undo these efforts, choosing to move forward with the current rule as a business decision.”

“At this point, the genie is out of the bottle, and with the genie out of the bottle, people have already done too much and gotten into better, stronger positions,” he said. “The DOL fiduciary rule started as a regulatory regime, but wealth managers and large financial institutions alike soon realized that there was a larger opportunity. Whether you’re a bank looking to attract investors who prefer a fiduciary, looking to increase your scale or simply managing your margin on recordkeeping accounts, digital advice is a better way to do business.”

Todd Rosenbluth, director of ETF and mutual funds research with CFRA, said investors and advisors will continue to adopt low-cost ETFs and mutual funds even if the rule is halted or delayed; even asset managers recognize the shift, introducing new share classes.

"In the last few years, many advisors have voluntarily shifted to a fee-based business over commissions and many brokers are encouraging this trend,” Rosenbluth said. “The days of A and C class funds gathering significant assets are moving into the rearview mirror. Moves by American Funds and Janus support this, and in an environment where equity and bond returns are likely to be more muted than in past, fees will only matter more. Expensive and underperforming funds are harder to justify inside client portfolios.”

“The DOL also promulgated this rule by stretching the bounds of the 42-year-old Employee Retirement Income Security Act in a way Congress never intended, and the agency is now subject to lawsuits charging that the rule is ‘arbitrary and capricious,’” said John Berlau, senior fellow at the Competitive Enterprise Institute.

A decision in a lawsuit filed by industry groups challenging the DOL rule is expected by February 10, but the DOL was directed to consult with the Department of Justice to consider staying the outstanding litigation, according to Erin Sweeney, a member at Miller & Chevalier.

“With implementation of the conflict rule just months away, it is already delivering real benefits to retirement savers: costs are dropping for retirement advice and products; incentives to act against customers’ best interest are being eliminated; and investor choice of how to pay for advice has been preserved. All that will be put in jeopardy so that President Trump can cater to the powerful special interest groups that profit so richly under the status quo,” said the Consumer Federation of America, Better Markets, the American Federation of State, County and Municipal Employees, and Americans for Financial Reform, in a statement.

Knut Rostad, president of the Institute for the Fiduciary Standard, believes the order presents fiduciary advocates with an opportunity to rethink their strategy.

“We need to remake messages to better speak to investors and leaders outside Wall Street and Washington. We need to remake messages to better challenge dubious, misleading or plainly wrong statements about the DOL rule. If we do, the Trump Administration will more easily see that putting retirements investors ahead of Wall Street, will, in fact, be huge and help ‘Make America Great Again.’”