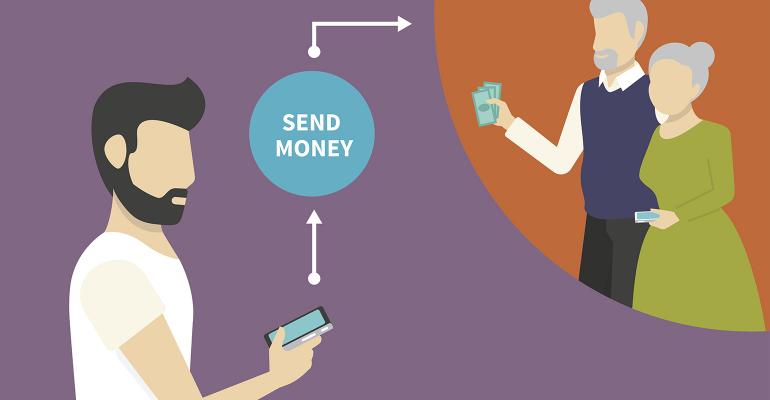 Wells: Financial Assistance to Children and Family Cutting into Savings

A significant number of investors are putting retirement goals at risk to help their adult children and aging parents; women investors are more likely to make the sacrifice.

According to a Wells Fargo/Gallup Investor and Retirement Optimism Index survey released Wednesday, almost half of U.S. investors have given financial assistance (not including college tuition) to their adult children or extended family members, and for many that puts their own reitrement goals in jeopardy.

“Today’s landscape is far different than that of a generation ago," said Mary Sumners, regional president of Wells Fargo Advisors’ Northern Region, in a statement. "With many retirees living decades into retirement and adult children accumulating hundreds of thousands of dollars in debt, investors in the middle are feeling the pinch for support in every direction. The poll suggests that adults who seek family financial support are no longer the exception but the rule.”

The average investor reported spending $10,000 when providing aid. Whiile only 7% said the impact on their finances was very negative, yet last year’s Wells/Gallup 3Q survey showed that nearly half of investors did not feel well prepared to handle an unexpected expense of $5,000, prompting the financial company to suggest there is a disconnect for the majority of investors who are undervaluing how their support to adult family members has negatively impacted their own financial situation, including saving for retirement.

Retired (44%) and non-retired (39%) investors said they provided significant financial help to extended family but non-retired investors were 11 percentage points more likely than their retired counterparts to say that providing this financial help had hurt their savings (31% vs. 20%).

Sumners said that while “it is extraordinarily generous for investors to step in and help adult family members with this level of support, there is risk if they are not doing so from a position of strength. Working with an advisor to build and maintain a comprehensive plan may help investors avoid sabotaging their own goals as they help close relatives.”

Wells/Gallup said that the time investors spend helping family members is significant. Those who provided personal assistance to adult family members said they spent 13 hours per week on average on such activities.

More than a quarter (28%) of investors who reported providing assistance to a family member said that doing so has had a positive impact on their emotional health, but the downside appeared to outweigh the upside for many in terms of time to themselves (56%), emotional health (52%), the ability to take time away from home (47%) and time for friends (40%).

Nearly one in four said the time commitment has negatively affected their ability to save for retirement (23%) or their finances more generally (22%).

“It is hard for people to imagine that the time and money they spend today could have an impact 20 or 30 years from now, but it is only then when you may see the true costs,” Sumners said. “It’s not that people won’t make the same decisions to support their family members, but seeing an illustration of the possible impact may influence their decision to supplement their own savings or earning potential right away.”

Meanwhile, the poll found that women investors are more likely than men to spend time helping a parent or in-law (14% of women versus 8% of men). Women who provided this care were also much more likely than males to be the sole caregiver (40% versus 13%).

This may partly explain why among all investors who provide care to any family member, women were much more likely than men to say the care negatively affects the time they have away from home (56% of women versus 30% of men) as well as time for friends (46% versus 27%). Women were also more likely than men to say that family caregiving had a negative effect on their emotional health (57% versus 40%).

The most common change said they were making as a result of the experience of caregiving was to save more for medical/personal care than they originally planned (59%). About half (49%) said they were more likely to move to an assisted- living community in their later years. Fewer showed greater interest in purchasing long-term care insurance (38%) or moving into a multi-generational home in their later years (28%) as a result.

However, few reported owning financial products that could help them pay these bills down the road. About a quarter of investors reported having an HSA, 20% said they had long-term care insurance and just 6% had longevity insurance.

Non-retirees were significantly more likely than retirees (12%) to have an HAS, reflecting the relatively recent emergence of HSAs as a healthcare financing option. There is no difference, however, in the two groups’ use of long-term care or longevity insurance.

“Many people understand the need to save for retirement, but it appears they have compartmentalized healthcare costs and are not planning the way they need to. Without planning, these expenses need to be funded outside the budget, which can bring stress and the feeling of being out of control,” Sumners said. “More importantly, underfunding healthcare costs later in life could deplete retirement savings and make investors vulnerable. By sufficiently planning for retirement as well as other future needs, investors can potentially take back control and interrupt the cycle of familial support.”

The poll was conducted online with 2,091 U.S. investors, aged 18 and older, between August 5 and August 11. The investors polled had at least $10,000 in stocks, bonds or mutual funds, either in an investment account or in a self-directed IRA or 401(k). Wells said that about 40% of U.S. households have such investments. 61% of the sample were retirees, with 59% reporting incomes of $90,000 or more.