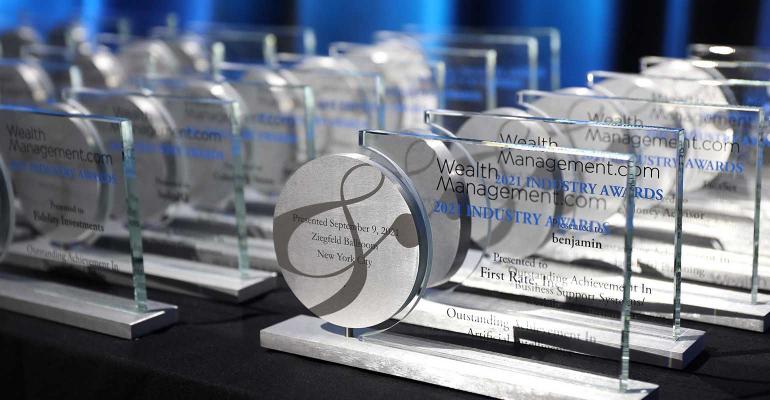 The annual Wealth Management Industry Awards ceremony will be held in person in New York City on Sept. 8.

The “Wealthies,” WealthManagement.com’s annual awards programs honoring the individuals, organizations and companies that help financial advisors build better businesses and create better outcomes for their clients, is back for its eighth installment this September.

The Wealth Management Industry Awards received a record-breaking number of nominations: nearly 1,000 entries from more than 350 companies. In all, 225 organizations were selected as finalists in one or more categories by a panel of independent judges, made up of top names in the industry, who select the winners.

“I was blown away by the breadth and depth of impactful companies and talented leaders in our industry," said judge Toussaint Bailey, founder and CEO of Uplifting Capital. "I enjoyed getting an up close look and having the opportunity to honor those who are moving us forward.”

Ninety-two firms were recognized for outstanding achievement in multiple categories. Leading the way with the most finalist awards were Orion with eight, followed by Carson Group and TIFIN with seven apiece and Riskalyze with six.

Lest anyone think it's all the same old names, however, 165 companies submitted a nomination for the first time this year, and 77 of them were ultimately named finalists.

“The record-setting participation in our industry awards this year is a testament to the value firms continue to place in the Wealthies as their best opportunity of the year to enhance their reputation, increase their brand awareness and set their organization apart from the competition,” said William O’Conor, managing director of WealthManagement.com. “This year we’re pleased to announce that we’ll be celebrating and honoring our awards finalists and winners with in-person afternoon and evening events in New York City, along with simultaneous virtual broadcasts accessible to a broader audience of awards team members and other wealth management professionals across the nation.”

In addition, the awards program was expanded in 2022 to recognize organizations that are pioneering innovation in retirement planning and charitable giving, as well as progressive companies who are advancing the integration and implementation of digital assets. And for the first time, individual awards will pay tribute to up-and-comers at RIA firms.

“Retirement planning has become a key focus for the industry, so we expanded the program this year to include additional categories for retirement plans and executive leaders—including Aggregator CEO of the Year, Defined Contribution Investment Only (DCIO) Providers, and Record Keepers,” said O’Conor. “A new Charitable Giving/Donor Advised Fund Award will acknowledge the asset managers who are leading the way in investment planning and education programs. With the excitement around digital assets growing more serious, our Cryptocurrency Award will salute the product and service providers who are bringing crypto to the mainstream. And finally, Rising Star Awards will honor next generation leadership in RIA firms as succession planning and ownership transition become key factors to success.”

Winners of the 2022 awards will be announced on Sept, 8, 2022 during a black-tie ceremony at the Ziegfeld Ballroom in New York City. Preceding the evening festivities, c-level executives from finalist firms will gather for a full afternoon of technology discussions and networking events—including CTO buyers’ panels led by key purchasing influencers at power users of wealth tech, and executive roundtables on the future of advisor tech.

"It’s my third year being a judge and I can’t believe how incredible this group of nominees is," added Wealthies judge Amy Flourry, a principal and director of operations, wealth management, at Rehmann. "The talent and ingenuity makes me excited to see what lies ahead for our industry."