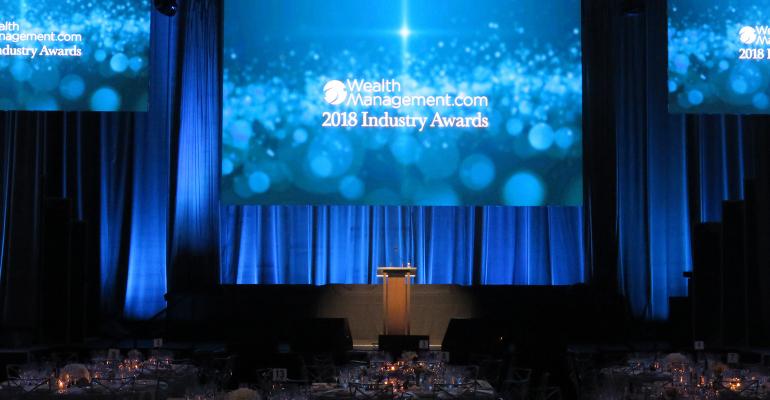 WealthManagement.com, the leading resource for wealth advisors and planners, announced the winners for the 2018 Annual WealthManagement.com Industry Awards on Thursday night during a black-tie awards gala at The Ziegfeld Ballroom in Manhattan.

Now in its fourth year, the Awards is the only awards program to honor outstanding achievements by companies and organizations that support financial advisor success. This year, judges presented 67 awards to 59 companies from a pool of 156 finalists.

“The WealthManagement.com Industry Awards provide us with the opportunity to recognize excellence among vendors and suppliers serving the final advisor community,” said David Armstrong, editor-in-chief of WealthManagement.com and the master of ceremonies for the event.

The awards expanded this year to include categories such as model marketplaces, alternative investment platforms and industry research providers. The Awards also recognized individual RIA firm leaders—including CEO, innovator, M&A leader and thought leader of the year for the first time in 2018.

A record number of nominations were submitted this year—nearly 600 entries were received from 156 companies.

“The sheer number of nominations submitted this year demonstrates the importance of innovation and creativity throughout the advisory industry,” said William O’Conor, managing director of WealthManagement.com. “By recognizing the outstanding achievements of these firms and bringing these companies together for the awards event, we help facilitate a dialogue that will benefit financial advisors, their clients and the industry overall.”

Winners were determined by a panel of eight judges from top names in the industry, based on quantitative measures of their initiatives, such as scope, scale, adoption and feature set, along with qualitative measures, such as innovation, creativity and new methods of delivery.