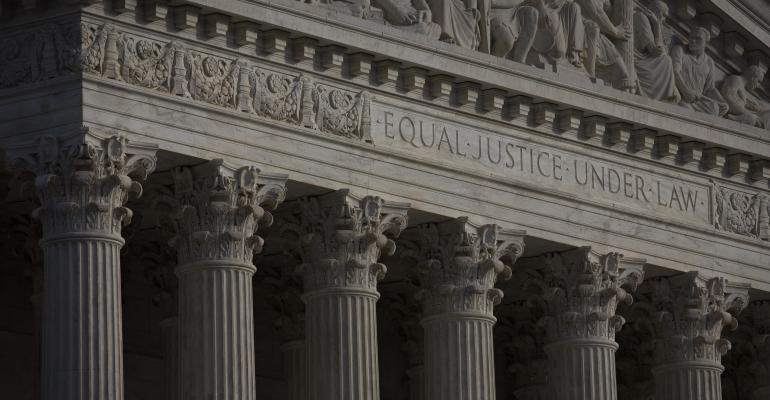 (Bloomberg) -- Wall Street figures accused of insider trading are keeping a close eye on a U.S. Supreme Court appeal by a Chicago grocery wholesaler trying to overturn his conviction for buying stock based on information leaked by a relative.

The justices will consider their first insider-trading case since 1997 on Wednesday when they hear Bassam Yacoub Salman’s case. It tests whether someone can be sent to prison for making trades when the insider who provided the tip wasn’t looking to make any money.

A victory for the government would be a boost for prosecutors and the Securities and Exchange Commission, restoring some of the legal leverage they lost in 2014 when a federal appeals court in Manhattan set new requirements for insider-trading convictions.

That ruling, which involved hedge-fund managers Todd Newman and Anthony Chiasson, undercut U.S. Attorney Preet Bharara’s eight-year crackdown on Wall Street cheating and led to more than a dozen insider-trading convictions being thrown out. After the Supreme Court refused to review the decision, Bharara said it created an "obvious road map for unscrupulous investors."

Defense lawyers and their clients now want the Supreme Court to reinforce the Newman ruling and apply part of it nationwide. Salman’s supporters include Mark Cuban, owner of the Dallas Mavericks basketball team, who was cleared by a jury of insider-trading allegations in 2013 and says in court papers that prosecutors need to be "reined in" to protect innocent traders.

Prosecutors said Salman and a partner earned more than $1.5 million in profits through trades based on inside information, including a tip about the 2007 acquisition of Biosite Inc. The government said the tips originated with Maher Kara, then a Citigroup Inc. investment banker, who gave it his brother, who in turn passed it on to his brother-in-law, Salman.

The Supreme Court case centers not on Salman’s conduct, but on Kara’s motivations. Salman contends prosecutors needed to show that Kara received a concrete benefit in exchange for the leak. A San Francisco-based federal appeals court disagreed, saying Salman could be convicted even if Kara gave his brother the information as a gift.

The disagreement is a product of the unusual way that insider trading has come to be classified as a crime. Federal securities-fraud statutes don’t specifically mention insider trading, but in 1983 the Supreme Court said prosecutions could be based on an insider’s breach of a duty to the company’s shareholders.

That ruling, however, wasn’t clear about what government lawyers must show. Justice Lewis Powell’s opinion said that, for a breach to occur, the insider must receive a "personal benefit from the disclosure, such as a pecuniary gain or a reputational benefit that will translate into future earnings." At another point, Powell said it was enough if an insider "makes a gift of confidential information to a trading relative or friend."

He lost potentially his strongest Supreme Court ally when Justice Antonin Scalia died in February. When the court rejected Whitman’s appeal in 2014, Scalia issued a statement suggesting he would define insider trading narrowly based on a legal doctrine that "requires interpreters to resolve ambiguity in criminal laws in favor of defendants." Fellow conservative Clarence Thomas joined his statement.

A ruling favoring the government would only partially undo the Newman ruling’s impact on Wall Street. The government won’t be able to revive cases that have already been dismissed -- like the one against SAC Capital Advisors LP’s Michael Steinberg. And the Supreme Court isn’t taking on a key part of the Newman ruling: its requirement that prosecutors prove the person trading on the information knew that it came from an insider who received a personal benefit.

Critics of the government say the court should issue a long-needed rebuke.

"Prosecutors have been overreaching in many cases for more than 30 years," said former Wall Street Journal reporter R. Foster Winans, who served nine months in federal prison after being convicted of securities, wire and mail fraud.

Scalia’s absence, however, makes a sweeping victory for defendants less likely, said Christine Chung, a former federal prosecutor who is now in private practice and represents Rajaratnam. The high court is still shorthanded more than seven months after Scalia’s death.

"With Justice Scalia gone, and the more liberal side of the court likely to resist cutting back on insider trading prosecutions, it’s unclear that the court will have an appetite to impose a dramatic limit," Chung said.

The case could divide the court along ideological lines. At the same time, recent white-collar crime cases have unified the court to some degree, as when the justices in 2010 narrowed the scope of a federal fraud law in the case of Enron Corp.’s Jeffrey Skilling.

Some lawyers say the court should jettison the entire focus on what the insider received. The central questions should be whether the disclosure served any corporate purpose and whether the insider knew the person getting the tip was planning to trade, said Tony Barkow, who filed a brief on behalf of the New York University law school’s Center on the Administration of Criminal Law.

That would be a "more principled, more consistent, more predictable and more fair approach," Barkow said. "Under the current law, outcomes are arbitrary and tied to facts that don’t matter."