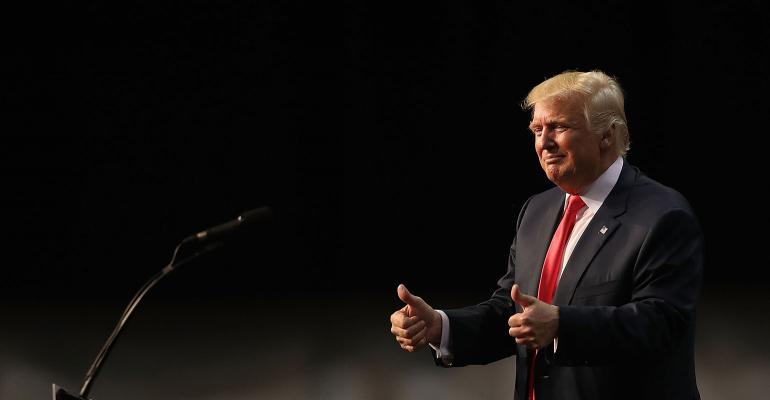 For Wall Street, which loathes unpredictability, Trump is an wild card.

By Jesse Hamilton and Elizabeth Dexheimer

During the campaign, a group of bankers from around the country -- plane tickets in hand -- were looking forward to meeting the candidate in the flesh at Trump Tower in midtown Manhattan. They were going to get a chance to hear from his own mouth what he’d like to do with their industry. But at the last minute, Trump canceled and decided to spend his time elsewhere, so they never got the chance.

They weren’t alone. Trump, the apparent president-elect, didn’t spend much time on the campaign trail discussing banks -- not nearly as much as Hillary Clinton did in her primary battle with Bernie Sanders. For Wall Street, which loathes unpredictability, Trump is an absolute wild card.

One thing is clear: Traders are nervous about Trump. In anticipation of his victory, U.S. stock futures fell as much as 5 percent and yields on 10-year Treasuries surged the most since Britain voted in June to leave the European Union. Market turmoil eased as news of his win set in.

A Trump White House was an outcome that bankers were never able to game out. Who will he tap to helm the Treasury Department? Will he follow through on his pledge to try to replace Federal Reserve Chair Janet Yellen? What exactly will he do to the Dodd-Frank Act? Answers have been elusive.

“It’s really tough to tell with Trump,” said Justin Schardin, a financial policy expert at the Bipartisan Policy Center. “There’s no indication that financial regulation is a high-profile issue for him.”

Trump said in August he’d issue a temporary moratorium on new regulations. (Would such a move halt rules on bank capital that haven’t taken effect?) He’s said he’ll repeal Dodd-Frank. (Does he plan to swap it for new regulations to keep banks from sliding into the Wild West?) He’s also said he’ll bring back the Glass-Steagall Act’s wall between commercial and investment banking. (Isn’t that a new regulation?)

Wall-Street has spent billions of dollars complying with Dodd-Frank, and it has transformed how banks do business. The biggest lenders are intimately familiar with most of its terrain, having battled over virtually every inch of the law during the last six years. What does it mean when Trump says he wants to dump it? The industry has no idea, but getting rid of the legislation could be a pain. While Democrats debated Wall Street policy during their primaries, the topic wasn’t a central feature of the Republican contest.

Not knowing costs money. Bank business models may need to be revamped if big changes are made, and whenever a dramatic revamp is brewing, the firms spend a lot on legal advice and lobbying.

When Trump has talked about Wall Street and the hedge fund industry, he’s bashed them, which has gone over well with his supporters. He ran an ad in his campaign’s final days, for instance, that featured Goldman Sachs Group Inc. Chief Executive Officer Lloyd Blankfein as a representative of the corporations that Trump says have pocketed the wealth that American workers have lost. And he’s accused hedge fund managers of “getting away with murder” on paying taxes.

In broad terms, the financial sector has historically counted on Republicans to give its policy goals a friendly ear. But the financial crisis made that bond much more tenuous. Hearings on Capitol Hill these days, such as those focusing on Wells Fargo & Co.’s bogus account scandal, are as likely to feature GOP criticism of banks as attacks from Elizabeth Warren.

Still, Trump is a businessman. He seems to distrust regulation, and bankers likewise feel the government has gone too far in the wake of the crisis. The industry can probably count on Trump to appoint less-aggressive leaders to agencies like the Securities and Exchange Commission.

But an even greater uncertainty will be whether the government outsider will sign off on legislation pushed by Republican lawmakers. A single party hasn’t controlled both Congress and the White House since the first two years of Barack Obama’s presidency. That’s the period that led to the passage of both Dodd-Frank and Obamacare. With Republicans retaining control of Congress, Trump has the pieces in place for a real legislative push.

Will he use legislation introduced earlier this year by House Financial Services Chairman Jeb Hensarling as a template? Hensarling, a Texas Republican, wants to tear up core sections of Dodd-Frank, including the Volcker Rule ban on certain bank investments and government powers to take apart failing financial firms.

Will Trump similarly allow the possible future Senate Banking chairman, Mike Crapo, to get his way? Lobbyists and Capitol Hill staff expect Crapo to overhaul the status of mortgage-finance giants Fannie Mae and Freddie Mac and make revisions to Dodd-Frank, including narrowing the list of banks subject to its toughest rules.

Befuddling Pledges
One of the financial initiatives Trump has called for-- reinstating the Glass-Steagall separation between bank lending and securities underwriting -- would need congressional backing. But Wall Street has been befuddled by Trump’s bashing of rules, while pushing for a regulation that would completely change the banking industry. And bringing back Glass-Steagall hasn’t traditionally been a policy Republicans support.

Though she might favor a new Glass-Steagall, Warren’s prized Consumer Financial Protection Bureau could be on very shaky ground. Created by Dodd-Frank, the CFPB has toughened oversight of mortgage lending and credit cards. It was among agencies that fined Wells Fargo $185 million for opening up scores of accounts without customers’ approval.

“I would look at the CFPB as an area of focus,” said Isaac Boltansky, an analyst at Compass Point Research & Trading LLC in Washington. Trump would have the power to fire Director Richard Cordray on his first day in office, Boltansky said.

“No one is prepared for a Trump presidency,” said Tony Fratto, a former assistant Treasury secretary in President George W. Bush’s administration who now works for banking clients as a partner at Hamilton Place Strategies. More pointedly, he added that Trump’s presidency will bring so many problems that a question like “Who is named SEC chair?” doesn’t matter as much.

“We’ll be putting a monster in the White House,” Fratto said.