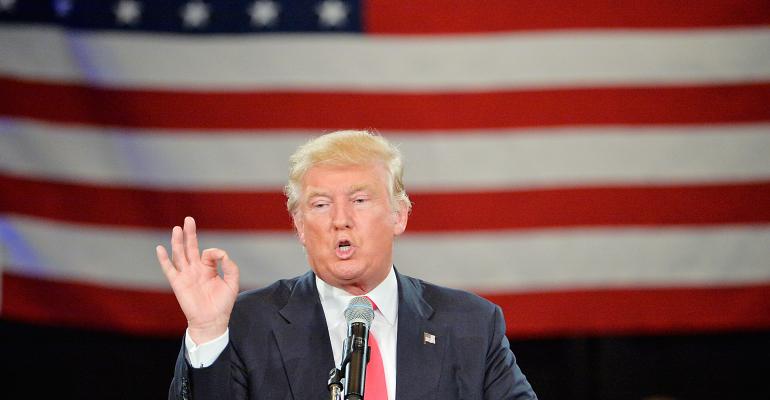 (Bloomberg) -- Donald Trump will propose a temporary moratorium on new financial regulations in an economic speech Monday in Detroit in an effort to draw a stark contrast with the domestic policies of Hillary Clinton, who he says “punishes” the American economy.

The Republican presidential nominee’s speech will focus on providing regulatory relief for small businesses, according to senior campaign aides familiar with its contents. More broadly, Trump will say he will not propose any new financial regulations until the economy shows “significant growth,” the aides said. Trump has previously said he would repeal and replace the 2010 Dodd-Frank Act.

​Trump will also propose a repeal of the estate tax, sometimes called the “death tax.” Under current law, the 40 percent tax applies only to estates larger than $5.45 million for individuals and $10.9 million for couples.

For U.S. businesses, Trump will propose a tax rate of 15 percent and suggest strengthening intellectual-property protections. He’s expected to call for three income-tax brackets, down from the current seven. He’ll call for the elimination of special tax treatment for carried-interest income at private-equity firms and other investment firms—the latter of which is a proposal his Democratic rival also supports.

Carried interest, which is a portion of investment gains paid to certain investment managers, is currently taxed like capital gains—at rates that can be as low as 23.8 percent. Trump proposes to tax them as ordinary income, but for members of partnerships, that could actually mean a rate cut to 15 percent.

Trump will continue to stress his opposition to the proposed Trans-Pacific Partnership trade agreement backed by the Obama administration and many prominent Republicans in Congress, and he will reinforce his commitment to the coal industry, saying a federal moratorium on some coal-mining permits would be the focus of a targeted review in his administration.

Other items on his energy agenda, he is expected to reiterate in the speech, include asking TransCanada to renew its Keystone pipeline permit application; rescinding the Climate Action Plan and “waters of the U.S.” rule; opening offshore drilling; and killing the Paris climate agreement.

He will portray President Barack Obama’s regulatory policies as having crushed middle- and lower-class Americans and will propose making all child care tax deductible. Clinton, in contrast, has proposed a cap on child-care costs at 10 percent of a family’s income.

Targeting the federal bureaucracy, Trump is expected to say that civil servants whose focus is job-killing regulation should be replaced with experts who would help create jobs.

Trump will take direct aim at the Clintons and Obama, pointing to Detroit as an example of their failed economic policies. He will argue that their “record-breaking pace of new regulations, tax increases, restrictions on private-energy production and one-sided trade deals” have hurt Detroit and other cities, according to excerpts of his remarks shared with Bloomberg Politics.

He will call Obama’s Clinton-backed regulations a “lead-weight on the economy, an anchor dragging us down.” And he will say that Americans “need to hit the pause buttons on these regulations so our businesses can reinvest in the economy.”

“She's the candidate of the past and ours is the campaign of the future,” Trump plans to say. “Every policy that has failed Detroit has been fully supported by Hillary Clinton. The one common feature of every Hillary Clinton idea is that it punishes you from working and doing business in the United States.”

His campaign aides said this is one of several economic speeches Trump will deliver this summer. One will include the unveiling of an infrastructure spending plan, while another will focus on financial regulations such as Dodd-Frank, the aides said.

For Trump, the challenge at this stage in the race is two-fold. His campaign is coming off one of its worst weeks following a series of self-inflicted gaffes that led to a sharp dip in national and swing-state polls, and economic indicators suggest that the economy is improving.

The nation’s unemployment rate in July was 4.9 percent—a sharp decline from a post-recession peak of 10 percent in October 2009, according to federal statistics.

Clinton, who was set to campaign in Florida on Monday, has spent the days following the Democratic National Convention attacking Trump on the economy. The Republican is pushing an agenda “that experts across the political spectrum say would lead to a recession and cost millions of American jobs,” the Clinton campaign said in a statement Monday.

Independent voters—particularly small-business owners and their respective trade groups—have argued for years that Obama’s regulatory proposals have stifled the economy. Trump’s proposal to issue a moratorium on regulations could help him win support from workers at mid-sized banks as well as small-business owners who say it’s unfair for them to comply with Dodd-Frank regulations written for big banks.

Republican donors and Trump supporters said they have high expectations for the speech.

Texas investor Doug Deason, who backed Ted Cruz for president in the primary, said he’d like to see Trump “lay out a plan to lower corporate taxes, eliminate federal bureaucracy costs by 10 percent or more, end all corporate welfare programs, convert welfare programs to work programs and dramatically reduce all of the silly federal rules the current administration has put in place.”

Deason, who helped Donald Trump Jr. raise money for his father in Dallas and Houston last month, added that he’d also like to see Trump name three or four agencies or departments he could eliminate.

Several donors said they’re craving specifics on how to repatriate profits trapped overseas, what exactly Trump would do with infrastructure, and how he’d pay for it, and how he’d encourage capital investments in plants and equipment.

“I would hope that he would cover the full range of economic targets from corporate and personal income tax to trade policy to regulatory reform and energy strategy,” said Wilbur Ross, chief strategy officer at WL Ross & Co., which has invested more than $11 billion in distressed companies, including Bethlehem Steel, since its founding in 2000.