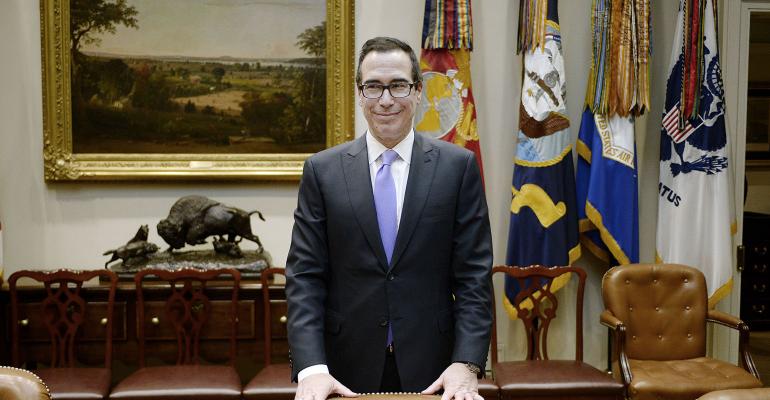 The 220-page report laid out a series of recommendations to roll back regulations affecting the largest banks, hedge funds and exchanges.

By Robert Schmidt and Ben Bain

(Bloomberg) --The Trump administration urged the overhaul of key rules underpinning trading in U.S. stock, bond and derivatives markets, calling on regulators to loosen dozens of restrictions imposed on Wall Street after the financial crisis.

In a 220-page report released Friday, the Treasury Department laid out a series of recommendations to roll back regulations affecting the largest banks, hedge funds and exchanges. Rather than making specific demands, the document is intended to be a road map for action by the Securities and Exchange Commission and the Commodity Futures Trading Commission.

“By streamlining the regulatory system, we can make the U.S. capital markets a true source of economic growth which will harness American ingenuity and allow small businesses to grow.” Treasury Secretary Steven Mnuchin said in a statement.

While some of the changes would require congressional action, most can be accomplished by re-writing rules, which would entail far fewer hurdles than legislation. The study was spurred by President Donald Trump’s February executive order calling for a broad rethink of financial regulations. Treasury issued a separate report on bank oversight reforms in June, and another looking at asset managers and insurers is set to be released in the coming days.

A number of the suggestions in the markets study have long been backed by industry, and groups like the U.S. Chamber of Commerce and trade associations for brokers were quick to praise them.

“These are a lot of common-sense ideas that are overdue for implementation,” said David Hirschmann, president of the Chamber’s Center for Capital Markets Competitiveness.

Meanwhile, Democratic lawmakers and investor advocates are expected to oppose many of the recommendations. On Friday, some said they were surprised that the new proposals would ease safeguards put in place for swaps and securitized bonds -- two products that fueled the financial crisis in 2008.

“This is a very clear signal to the regulatory agencies to ease up, in numerous areas, on Wall Street,” said Marcus Stanley, policy director of Americans for Financial Reform.

Still, the administration’s wish list isn’t likely to be granted any time soon. The regulatory process is notoriously slow and neither the SEC nor the CFTC have a full compliment of commissioners.

Treasury’s recommendations include proposed adjustments to rules stemming from two laws that tightened capital markets oversight, the Sarbanes-Oxley Act of 2002 and the Dodd-Frank Act of 2010. Two Trump appointees, SEC Chairman Jay Clayton and CFTC Chairman Chris Giancarlo, will be charged with carrying out many of the proposals.

Both agencies saw their oversight roles expanded by Dodd-Frank, with the CFTC being given responsibility for policing the massive over-the-counter derivatives market. The two chairmen are aligned with the administration’s goal of dialing back some of those rules.

For the SEC, the report suggests numerous tweaks to regulations governing initial stock offerings to entice more companies to go public -- one of Clayton’s main policy goals. It would also streamline the agency’s disclosure requirements and exempt smaller companies from some rules.

The review also recommends that the SEC repeal several controversial Dodd-Frank provisions, including one that mandates corporations reveal how their chief executive’s compensation compares to an average worker’s pay. Another, taking aim at companies that buy so-called conflict minerals mined in the Democratic Republic of Congo and other nearby countries, was also targeted.

On derivatives trading, Treasury said the CFTC and the SEC need to be “judicious” when applying their swaps rules outside the U.S. The agencies should also try to make their requirements line up with those imposed by overseas regulators, the report said.

The study weighed in on more specific derivatives requirements under consideration at the CFTC, recommending that the commission complete delayed limits on traders’ ability to speculate on oil and other commodities.

Treasury also stepped into a long-standing debate over the amount of swaps trading firms can engage in without being required to register with the commission as dealers. The report urged retaining the current $8 billion threshold be retained, siding with energy and agricultural firms that have lobbied to stop a planned drop to $3 billion in December 2018 so they won’t be subject to the oversight.  The report backed reduced margin requirements for uncleared swaps. It also echoed Giancarlo’s calls for a loosening of some restrictions placed on swaps trading venues.

“We are pleased to see our perspective incorporated in the final product,” Giancarlo said in a statement.

Craig Phillips, a former BlackRock Inc. executive, has been leading the Treasury’s regulatory review. He is now a senior adviser to Secretary Mnuchin.
Adds report recommendations beginning in 11th paragraph.