/sites/all/themes/penton_subtheme_wealthmanagement/images/logos/footer.png
Recent
Recent
Addepar Acquires Trading And Rebalancing Platform AdvisorPeak
Oct 22, 2021
Orion Acquires RegTech Provider BasisCode
Oct 22, 2021
Orion Acquires RegTech Provider BasisCode
Oct 22, 2021
You Get What You Give: Why Advisors Are Losing the Race for Talent
Oct 22, 2021
Featured
The 10 Best and 10 Worst States in Which to Retire in 2021
Jul 15, 2021
Poll: 15 Classic Books on Investing and the Markets
Apr 03, 2020
25 U.S. Markets Adding the Most Multifamily Units This Year
Feb 03, 2021
Fifteen Must-Listen Business Podcasts for Advisors
Aug 14, 2020
TD Ameritrade National LINC Conference
brought to you by 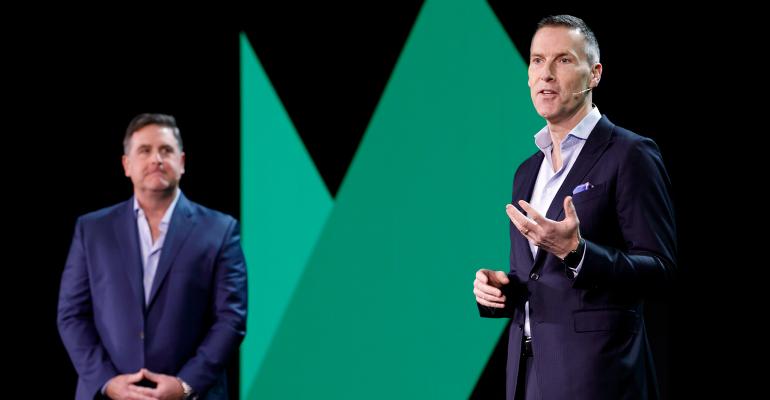 The president and CEO told advisors the company's innovations are meant to support them, not replace them.

“Honestly, I feel like we’ve been ambiguous about this in the past,” Hockey told attendees at the firm's National LINC conference in San Diego. “Our strategy is clear: We will not compete with you.”

Some RIAs raised concerns about TD Ameritrade's retail business competing with them when the company launched a managed account service last spring. In an interview with WealthManagement.com at the firm’s recent Elite Linc conference in Colorado Springs, Colo., a gathering of the custodian’s top financial advisors, Hockey said the service, which pairs a retail client with a TD Ameritrade financial consultant to construct goals-based investment portfolios, is meant more to fill an “advice gap” for the company’s traditional do-it-yourself investor who doesn’t want the full engagement with an independent advisor.

Still, the fear that businesses with TD Ameritrade were competing for assets was prevalent enough that Hockey felt a need to remind attendees that the company envisions the contrary. TD Ameritrade is working to refer more retail investors to registered investment advisors, helping them grow their businesses, Tom Nally, president of the TD Ameritrade Institutional business, told attendees. Nally addressed the crowd of roughly 2,000 advisors alongside Hockey.

Among other improvements to its Veo One platform, TD Ameritrade revealed Thursday new skills it developed for Amazon's Alexa for both investors and RIAs. Clients, whether they are investors or advisors affiliated with TD Ameritrade, now expect cutting-edge technology. It's "table stakes," and the expectations among consumers and clients for the most frictionless user interfaces possible are why the company is "laser-focused" on innovating and improving those experiences.

“Your ability to adapt and evolve has become more important than ever,” Nally told advisors.

Nally also reiterated Hockey's message and said that the innovation will enhance, and not replace, advisors.

“The bottom line is we’re not going to try to compete in the same place as RIAs” Hockey said. "Rather than competing with our [advisors] ... if someone is looking for a service you provide, we’ll refer that client to an RIA, full stop.”