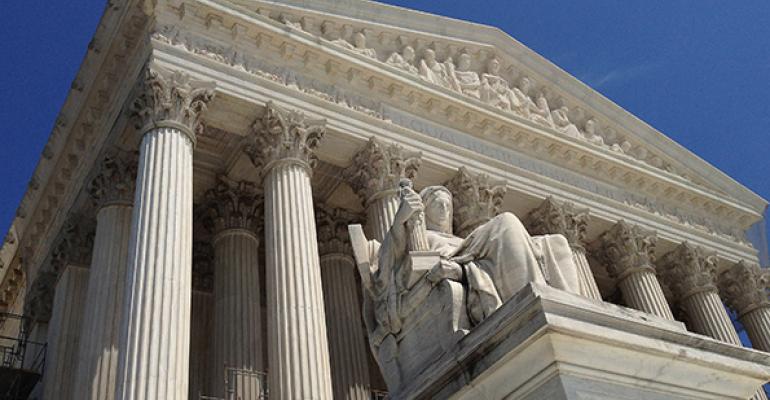 The ruling could affect about 100 cases currently at the SEC, along with a dozen that are on appeal in the federal courts.

(Bloomberg) --The U.S. Supreme Court took a step toward consolidating the president’s control over administrative agencies, ruling in favor of an investment adviser found to have misled prospective clients with his "Buckets of Money" retirement plan.

The court said Thursday the in-house Securities and Exchange Commission judge who handled Raymond Lucia’s case was a constitutional "officer," meaning he should have been directly appointed by the SEC.

Lucia had been fined $300,000 by the SEC judge and barred from working as an investment adviser. Writing for six justices in the majority, Justice Elena Kagan said Lucia was entitled to a new hearing before a different judge or the commission itself.

The original judge "cannot be expected to consider the matter as though he had not adjudicated it before," Kagan wrote.

The ruling could affect about 100 cases currently at the SEC, along with a dozen that are on appeal in the federal courts. It also could affect hearing systems at other government agencies, including the Federal Deposit Insurance Corp. and the Consumer Financial Protection Bureau, which have similar systems for appointing what are known as administrative law judges.

More broadly, the ruling could be a prelude to a future decision that would make judges more susceptible to being fired for not abiding by commission priorities. The high court stopped short of ruling on that issue in the Lucia case.

The Constitution requires that officers, as opposed to mere employees, be appointed by the president, a department head or a court.

The Trump administration took the unusual step of backing Lucia at the high court and arguing that the SEC’s appointment process for judges was unconstitutional. That was a shift for the federal government, which had previously contended that agency judges lacked enough authority to be considered officers.

The administration, however, disagreed with Lucia about the practical implications of the constitutional issue, saying the commission has retroactively fixed the problem by ratifying the judges’ appointments itself.

Justices Ruth Bader Ginsburg and Sonia Sotomayor dissented. Justice Stephen Breyer agreed with some aspects of the outcome but not all.

Lucia, now 68, wowed audiences with presentations showing how his investment strategy would have protected nest eggs in the booms and busts of the 1960s and ’70s. The SEC said he used fake data to mislead investors.

In an interview earlier this year, Lucia said the SEC found no victims and held his Buckets of Money presentation to a legal standard that didn’t exist.

"A federal judge would have thrown this out," Lucia said. "They would have said, ‘Wait a minute, where’s the proof that this person has misled someone?’”