/sites/all/themes/penton_subtheme_wealthmanagement/images/logos/footer.png
Recent
Recent
Envestnet Connect To Headline At Virtual Summit
May 26, 2020
CFP Board Takes Disciplinary Hearings Virtual
May 26, 2020
Franklin Templeton Fires Portfolio Manager Amy Cooper Involved in Central Park Dog Incident
May 26, 2020
Michael Kitces' #FASuccess Podcast: Mindy Diamond on Helping Advisors Choose a Brokerage Platform
May 26, 2020
Can a 2020 Payroll Tax Cut Save the Economy?
May 22, 2020
Featured
Poll: 15 Classic Books on Investing and the Markets
Apr 03, 2020
FICO Updates and Their Impact on Credit Scores
May 06, 2020
The Top Colleges for Financial Planning
Oct 03, 2019
The 10 Most and 10 Least Valuable College Majors
Aug 28, 2019
Bloomberg
brought to you by 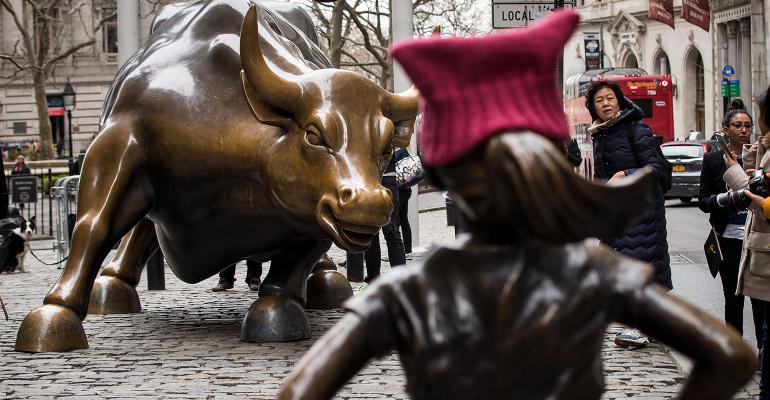 The Stock Market Has Become a Very Liberal Place

Left-leaning behavior by publicly traded companies is being rewarded by investors.

(Bloomberg Opinion) -- Wall Street was a very conservative place politically when I started working in the capital markets in 1999, but it seems to have lurched to the left lately. It’s not only that many of the people who work there have becoming more liberal, but more importantly, left-leaning behavior by publicly traded companies is being rewarded by the stock market.

The decision by the Business Roundtable, which is an organization led by JPMorgan Chase & Co. Chief Executive Officer Jamie Dimon, to explicitly state that the purpose of a publicly traded company is social responsibility and not creating value for shareholders is just the latest example of this lurch to the left.

For decades, most public companies have chosen to remain politically neutral. That remained the case even after the Citizens United Supreme Court decision on campaign finance in 2010 that held that the free speech clause of the First Amendment prohibits the government from restricting independent expenditures for political communications by corporations. Most expected the Citizens United decision to result in conservative political speech, but it has been quite the opposite. Ben and Jerry’s, a unit of Unilever Plc, recently launched a flavor of ice cream designed specifically to support Bernie Sanders’s presidential campaign.

Nike Inc.’s shares are up about 36% since the start of 2018, compared with 9.20% for the S&P 500 Index, despite backlash from some conservative outlets for signing controversial former National Football League quarterback Colin Kaepernick to a marketing deal and then bowing to pressure from the left and pulling its special edition sneakers featuring the “Betsy Ross Flag” that some feel was a symbol of racism. I was recently in a Nike outlet store here in Myrtle Beach, South Carolina, and it was packed with a checkout line 30 people deep in the middle of summer.

The technology sector leans to the left, led by Google’s parent company Alphabet Inc. and Amazon.com Inc., whose Chief Executive Officer Jeff Bezos owns the Washington Post. Many consumers may complain about the liberal orientation of these companies, but there is not a lot they can do to avoid them. Sure, share prices of tech firms have stalled lately, but that’s more likely due to the threat of antitrust action than a reflection of their political orientation.

The list of companies who have engaged in left-leaning speech, marketing or protest is getting long. The list of actions include pulling advertising from various Fox News programs, supporting the Women’s March, pulling products related to President Donald Trump from stores and banks dropping business with the certain gun makers.

There have been few consequences, and no serious boycotts of these companies by conservatives, or at least none have been effective. Conservative media outlets had some fun with Procter & Gamble Co.’s $8 billion charge for Gillette, attributing it to backlash from an ad campaign asking men to “do better.” But the razor business has been bad for a while, with competitive threats coming from all sides. And more men are growing beards these days, so one is probably not related to the other.

Corporate America may have declared a political orientation for strategic reasons. Companies today have more data and information than ever on their customers. What works for Nike may not work for Bass Pro Shops.

Then there’s the waterfall of money that is earmarked for environment, social and governance, or ESG, investing strategies. It is the only form of active management that seems to be gathering assets even with a mixed track record when it comes to returns. The idea here is that companies engaging in socially responsible behavior should be rewarded by the stock market, but that isn’t always true.

Indexing is widely considered to be a left-wing philosophy, the idea that you would invest in all companies equally, instead of trying to pick the best stocks. It has even famously been called worse than Marxism by Sanford C. Bernstein & Co. As everyone knows, index fund assets have been growing at an astronomical pace. By some estimates, passive strategies now make up 40% to 50% of all assets under management, and it shows no signs of slowing down. Even actively managed funds with great performance are losing assets.

We’ve come a long way from suspender-snapping, bull and bear cufflinks and “lunch is for wimps.” Back then, the idea that you would invest your money and not seek the highest return would have seemed odd.

I assume that decisions to engage in political speech are carefully considered by managements, but I still find it disconcerting. I’m from a generation that grew up believing the job of a public company was to “make money,” not “do good.”  When they both align, then great, but what hasn’t changed is that people still like to see the value of their investments go up every year.