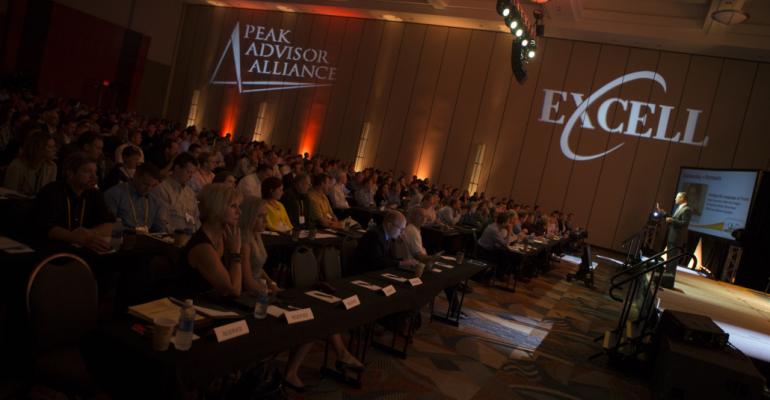 A community of elite advisors and allied institutions gathered this fall for the 27th Excell Meeting. Hosted by Peak Advisor Alliance, one of the country’s leading practice management programs, and Ron Carson, a perennial favorite on both the Barron’s and LPL top advisors lists, the semi-annual advisor love fest drew a throng of nearly 400 participants to what might now be deemed the new city of brotherly love.

It is hard to overestimate the impact Ron Carson makes wherever he shows up. His stage presence and public persona are undeniable. There’s just something in the way he speaks and engages in conversation that makes you want to be a better person. It is not only in the words he says, but in the conviction with which he speaks.

If you hang around with Ron for any period of time, you’ll hear him talk about developing a strong “why” for your business and “re-igniting your burning desire.” This is not just parlor talk for Ron Carson. He walks his talk by adhering to a professional and personal discipline that just might parallel that of a former military officer. His focus on what matters, clarity of thinking, daily regimen, and ability to look through people is uncanny.

@acketyack: "The best ideas at the firm don't come from me. I've been fortunate to surround myself with great people" @rchusker says #PeakExcell

@marieswift: "I was the worst micromanager in the world. I used to open the mail every day," says @rchusker #PeakExcell

Carson's "Why for Excell

“You have all spent time and money to be here,” said Carson in his opening stage comments. “At a minimum, you need to glean one actionable idea and commit to implementing it by the spring 2015 Excell Meeting. The maximum goal for this and every Excell Meeting is for us to influence you and inspire greatness.”

“There is a crisis in our profession,” said Carson as he paused for emphasis. “People are more afraid of running out of money than they are of dying. YOU stand between investors and the possibility of that catastrophe becoming a reality.”

“Notice that I said ‘profession’ – not ‘industry’, not ‘business’ or anything else,” Carson continued. “All of us must work to make this a profession and to exemplify the same level of excellence the nation’s best doctors, lawyers, and accountants display.”

“We are going on 14 years now, meeting together as a community, to get better at what we do and to share our best ideas. This is a very special group. I am proud to be associated with you,” Carson said before yielding the stage to the first of two keynote speakers.

@PeakAdvisor: #OmahaStreetPercussion starting the day off here at #PeakExcell with the sound of their captivating drums!

Patrick Miller, co-founder and president of SC Distributors, one of the three big meeting sponsors, along with Orion and LPL Financial, introduced the first keynote speaker, the legendary and colorful Bob Knight. Knight is best known as the head coach of the Indiana Hoosiers from 1971–2000. He also coached Texas Tech 2001–2008, the US Army 1965–1971, and many other college teams. “Knight was one of college basketball's most successful and innovative coaches, having perfected and popularized the motion offense,” Miller said. “He has also been praised for running clean programs because none of his teams were ever sanctioned by the NCAA for recruiting violations, and for graduating most of his players.”

But it was perhaps Ron Carson’s top three take-aways, delivered as a recap after the conclusion of each keynote that provided the most value for the advisors who planned on taking Ron up on his original challenge: find one actionable item and implement it before the spring Excell Meeting. Carson’s recap of Knight’s speech: (1) A minute of preparation is worth an hour of doing. (2) Remove all the things that can cause you to lose and winning will take care of itself. (3) Draw your people in and trust them to carry out the mission, but remember that some things can’t be put to a vote.

@HarkinsWealth: Coach Knight: The desire to prepare to win is more important than the desire to win #PeakExcell

@DeeNickers: We all need to learn to say "No, thank you" if what people ask of us doesn't align with our goals. #PeakExcell

Leadership Insights from a Marine

For me, the most poignant and important content was delivered by a former Marine: “Marines are mission oriented and so are you as financial advisors,” said Colonel Arthur J. Athens, USMC (Ret.). “Every day you make a difference in people’s lives, touching their assets, helping them build true wealth and strengthening relationships.”

Col. Athens, the father of 10 children, talked about leading while experiencing a personal crisis. He also told us how to build outstanding teams and shape the future by using the Three C’s of Leadership: Competence, Courage and Compassion. He underscored the need to be a humble servant, no matter how much success we achieve in life. “The more successful you become, the more important it is to cultivate healthy humility. Unhealthy arrogance can blind us, and lead us to the brink of where we make bad decisions, thinking the rules don’t apply to us anymore. People fall because they are on the wrong side of the spectrum,” he said.

Col. Athens offered a very helpful way to evaluate on which side of the spectrum one falls, saying: “Level 5 Leaders have strong professional will. But they also make sure the mission is taken care of – and so are their people. They know it’s not about them; it’s about service, it’s about the team.”

@StevenHammond93: Colonel Athens was the best speaker I've ever had the privilege of listening to. So glad he was at #PeakExcell today.

The Peak leadership team seems to have mastered the art of conference content. When I spoke with VP and General Manager Laura Pierson, she said they work well in advance of each Excell Meeting so they can get just the right mix of inspiration/motivation and education/information. Advisors I spoke with said they appreciated both types of content. Ironically, none of them mentioned the fact that they would get to hear Ron Carson speak during the meeting. Instead, they pointed toward sessions where they would have the opportunity to interact with other advisors in attendance and to learn from the panel discussions and main stage presentations (arguably, Carson could have been placed in that bucket, as he did have several panel slots and/or main stage appearances).

Specific portions of the Excell Meeting are geared to the various audiences Peak serves.  This keeps the content focused and highly relevant for each group of participants. Many advisors mentioned the value of the Million Dollar Advisor Roundtable workshop where top-producing advisors share best ideas and challenges both in a small roundtable format and as a larger group. Support staff talked about the Team Summit, a session geared specifically to the needs of employees or “stakeholders,” as Ron Carson calls them, within a practice.  Key topics addressed in this session included how to delight clients, how technology can aid the client experience, and how to attract ideal clients through referrals and passion prospecting events. Everyone raved about the general sessions.

In addition to sessions already mentioned in this piece, featured presentations included:

Ron Carson and Peak’s Managing Director, Paul West, continued to emcee the event and synthesize the continual stream of good information. Breaks and meals were “protected time” for networking so advisors and their teams could continue the idea sharing.

Not Just Another Exhibit Hall

The array of sponsoring companies in the exhibit hall is also worth mentioning. From a tailor and custom suit maker … to Ron’s favorite cookie baker … to Ron’s favorite charity and family cause … … to a more heady array of investment solutions … to a bank that specializes in giving loans to advisors in merger/acquisition mode … there was a unique and unusual mix that sparked new and interesting conversation.

“People at Excell Meetings are simply more engaged than other conferences,” said Dick Pfister, Executive Vice President of Altegris, a provider of alternative investment products during his sponsor spotlight on the main stage. Unlike some of the larger, more sterile conferences I’ve attended, the energy in the exhibit space was palpable as advisors swarmed the solutions providers’ booths on opening night. The goal for each advisor was to get their Connect 7 card “punched” and full enough to qualify for the stellar prizes that would be given away at the end of the meeting.

@Equanimity_WM: Thx @CarsonWealth for all the great actionable info from #PeakExcell we'll use 2 improve & grow our #wealth management practice. #inspired

Peak’s focus has always been on content, coaching and community. I discovered at this particular Excell Meeting that “community” might be the biggest differentiator of all.

While interviewing some of Peak’s long-time members to find out why they keep coming back year-after-year, I ran into Bill Spalding. An Atlanta-based RIA with over 30 years of industry experience, Spalding has been coming to the Excell Meetings for more years than he could accurately count. “Excell conferences are unlike any other industry meetings. Peak members are able to connect in a highly inspiring environment with some of the industry’s top thought leaders. We share ideas and learn new best practices. One of the key differentiating factors is the willingness to openly share what we are doing and how we are achieving success.”

I later found Spalding sharing ideas with David Glover, another Atlanta-based advisor and long-time member of the Peak Advisor Alliance community. “We’re not really competitors, we’re colleagues and friends,” he explained. “This gathering is not like the large B/D gatherings I attend. It’s big enough to be interesting but small enough to feel connected,” Glover said.

Houston-based Randy Price, a top advisor with RBC Wealth Management, says it is the like-minded people that keep him coming back. “Real people are fun to be around – people that are committed to excellence, people that have a mission that’s greater than just the business, because at the end of the day it’s not just about how much money is in the bank. This conference touches all the buttons for me, and I’ve never seen so many people openly sharing. Egos are typically ‘checked at the door’. We understand that no one here is really a ‘competitor’ even if they have a wealth management firm right down the street.”

“Advisors come here to gain new friendships, resources and tools to help them grow both personally and professionally,” said Price’s coach, Greg Opitz. “Randy has been a part of our community for about 4 ½ years, and in that time he’s only missed one meeting … so 8 out of 9 is not bad. And actually, he’s being really humble – he’s in the top 1% at RBC, which as you know is one of the nation’s most prestigious financial institutions.”

One additional conversation I had was with Minnesota-based advisor Bryan Sweet. Sweet is a long-time Peak member and one of Raymond James’ most successful advisors. Go to Best Practices in the Financial Services Industry to access the full conversation.

“Our passionate community is one of the reasons why Peak members are so successful,” said West. “Advisors need to know they are not in this alone, and that others are out there who share similar goals, challenges, and triumphs. So we created an atmosphere to make this possible.”