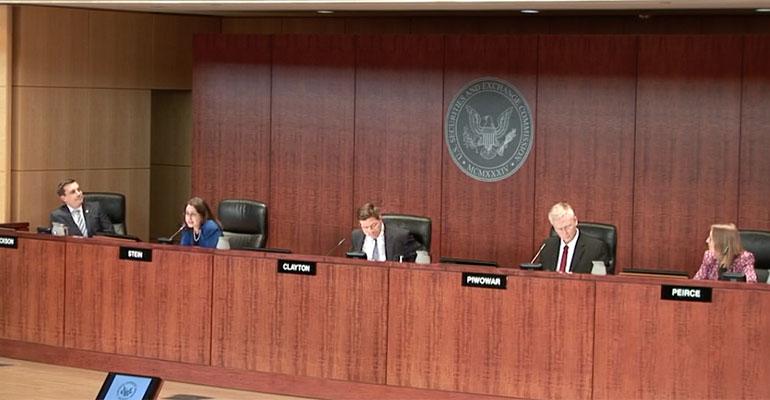 The SEC commissioners pushed through a proposal package that would establish a best interest standard for broker/dealers and restrict brokers from using the titles “advisor” or “adviser.”

A five-member Securities and Exchange Commission panel voted, reluctantly, Wednesday afternoon, to propose a landmark rule package that would set a broker advice standard, institute a mandatory disclosure document summarizing investment advisors’ and brokers’ relationships with clients, and offer an official interpretation of the standard of conduct for investment advisors.

This moment was highly anticipated, suffering numerous delays, largely due to fractious partisan politics within the SEC itself, since authority to make a proposal was granted in the Dodd-Frank Act.

Under the proposal, a broker making a recommendation to a retail customer would have a duty to act in the best interest of that customer, without putting the broker’s own interests (financial or otherwise) ahead of those of the customer. Compliance with this duty would be judged by a broker’s performance in regard to three obligations:

In order to alleviate customer confusion about the differences between brokers and RIAs, the proposal would require both groups to create and disseminate to retail investors Form CRS (client/customer relationship summary). This four-page-max length disclosure would be required to include certain standardized information, highlighting the key differences in the principal services offered, any legal standards that apply, fee structures and certain conflicts of interest.

Further, investment advisors, broker/dealers and the professionals who work for them will be required to be up front with investors about their registration status. Brokers would be restricted from using the terms “advisor” and “adviser” in their names or titles, since those monikers may mislead investors into wrongly thinking that the professional in question is an RIA.

The proposal would also reaffirm and clarify certain aspects of the fiduciary duty that an investment advisor owes to clients, as established under the Advisers Act.

Though the vote was 4 to 1 on all three items, the commissioners’ collective reaction to the proposals was tepid at best. Democratic commissioner Robert Jackson Jr., as well as Republicans Hester Peirce and Michael Piwowar, all voted in favor, but also voiced serious misgivings about the proposals. SEC Chairman Jay Clayton was the fourth vote in favor.

The main point of dissent is the clarity, or lack thereof, of the proposed standards. Piwowar said of the over 1,000 page proposal, “The size of this package alone gives me pause. If it takes us that many pages to explain what we are trying to do, dare I say that our solution might necessarily lack the clarity that is needed to address retail investors’ confusion?” There is also concern that the ballyhooed Form CRS may end up simply adding to the amount of advisor communication that ends up in investor trashcans.

Their reasons for pushing it through largely seemed to center around a desire to simply get things moving and then rely on the subsequent comment period to help iron out some of the details. For example, Piwowar exasperatedly expressed: “No longer can anyone say the SEC really needs to do something about this,” while Jackson voiced his support by saying he will “reluctantly vote to open these proposals for comment.”

Democrat Kara Stein, the only commissioner to dissent, launched into a nearly half-hour long diatribe against the proposals.

“Despite the hype, today’s proposals fail to provide comprehensive reform or adequately enhance existing rules. In fact, one might say, the emperor has no clothes,” she said.

This is just the first step in the rule-making process; next, there will be a 90-day comment period.